When I decided to attend this show, I did not know what to expect. The announcement of A Place to Bury Strangers, abbreviated APTBS, scheduling a show in Malaysia was the last thing I anticipated but my expectations were surpassed as they played The Bee in Publika on September 2nd in conjunction with their Transfixiation Tour. Various websites have proclaimed that the band is New York City’s “loudest band” and even gained the title “the most ear-shatteringly loud garage/shoegaze band you’ll ever hear” by The Washington Post. As a person whom has experienced their earth-shattering performances, I can assure you, their YouTube videos of singles and live videos alike, do not do justice to how exceptionally amazing they are live.

The venue was set to resemble an underground scene much like The Chain Reaction in the States. The set up was simple, with only one spot light and one projector lighting up the room. The darkness had created an ambience similar to an old school punk rock gig. But it was far from that. As the band took the stage, the darkness was replaced with strobing lights and psychedelic projections of images illuminating the walls. I have never seen anything quite like it. It was majestically beautiful to be a part of it. 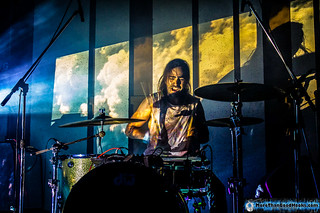 Oliver Ackermann, Dion Lunadon and Robi Gonzalez kicked off the show with a brief introductory number and headed right into “We’ve Come So Far”, a single off their latest full-length album, Transfixiation. The venue was filled with ear-shattering squeals of Ackermann’s guitar (Ackermann is also the founder of Death By Audio guitar effects pedals), the thumping rhythms of Lunadon’s bass and aggressive beats of Gonzalez’s drums. Stock footage is projected onto the band and strobe lights constantly go on and on making the concert look like a series of projected images. Ackermann was literally throwing his guitar up in the air, letting it fall to the ground, and picking it up as if nothing happened until the guitar stopped working. And this was only the first song. 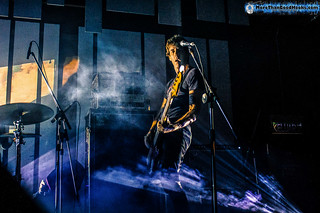 The madness continued throughout the rest of the night as videos from the projectors were screening images onto the walls, the crowd, and the band to accompany the ear shattering music. Strobe lights were constantly going on and off. Despite having been at a number of music festivals and gigs, APTBS topped my list on being the loudest band. The band played for 90 minutes straight without any break in between the songs and the most surprising thing yet was there was no interaction between the band and the crowd and yet everyone including myself could feel the chemistry and connection. At one point, Ackermann picked up the strobe lights and shined it on the crowd. With the overwhelming wall of noise coming from only two speaker cabinets on the stage, the crowd could not resist from headbanging to the Brooklyn trio. 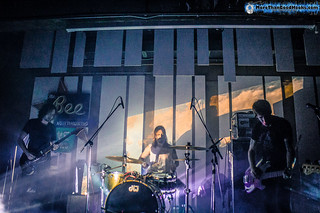 Towards the end of the set, the trio slowly phased themselves out of the set with Gonzalez jumping off the stage and headed right to the soundboard on the floor of the venue. Those who are familiar with the band knew exactly what was going on. It was their signature encore performance! Lunadon and Ackermann then joined Gonzalez on the floor. The entire breath-taking encore performance was only accompanied by a dazzling portable laser light show that provided the only light to make entire encore visible to the audience. With the guitars and microphone plugged into the console, the trio then played their final two numbers of the night. By the time it was over, nobody could hear and everyone was yelling to be heard but everybody in that room wanted to experience it again. As soon as the set ended, the band went on the floor and met all their eager fans and gave almost everyone a hug or a high-five. This has to be one of the best gigs I’ve been to in a long, long time.