Upon mentioning the name, it used to be akin to Angela Gossow ringing in my head. Being one of the most influential metal female vocalists, I put Angela above classic divas like Nina Simone and Etta James, though clearly they are worlds apart in genres. But being the minority in the scene, Angela has been inspirational ever since I heard the album Wages of Sin, I was blown away and declared myself a fan at the very moment listening to the first track off the album titled Enemy Within. I was in awe and when I learned that they were coming back in 2012, I did not hesitate to spend my savings on the costly ticket because it was all too worth it and true it was.

When Angela announced her departure and another female vocalist filled in the slot for her in 2014, of course then, I was all too skeptical and I didn’t expect much of what’s the come from the upcoming vocalist but that very night on Good Friday, blew my suspicions off the water and off the charts as I was massively in awe with the performance. I knew then I couldn’t keep my mouth close as I was entertained through and through.

It was well a sold out show as the familiar venue littered with metal heads, young and old, clad in a uniform colour of black, and I never felt more comfortable in my own skin. It gives me the familiar feeling and I was not conscious of my surroundings like I usually am during the peak periods of work week. I was trying to position myself close to the stage front to get the best view for the night.

The screen showed interview session with the new member of the band, Alissa White-Gluz. I have learned to admire her through the years of awaiting for their return to Singapore until the day finally arrived. I also learned that she is a strong advocate for veganism and that got me more intrigued with the bonus of knowing that she is currently dating Doyle from Misfits. This lady seemed promising and what the last tick off the list would to finally get to witness her vocal prowess live that very night. 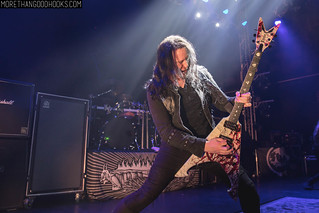 The night started with “The World Is Yours”, a song that has been on repeat on Spotify for me, and I remembered blinking my eyes as I was in total awe and disbelief, witnessing her vocal capacity. It was as good as me listening to the song on their record. I told myself and was surprised it took me this long to finally swallow it in. I was too sold on the idea that no one could fill the gap of the shoes left by Angela but I was proven utmost wrong as the crowd cheered along. 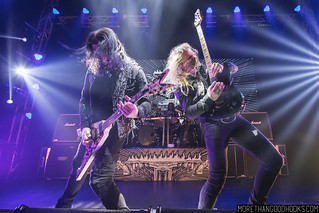 “Khaos Legions” would be the best album from Arch Enemy to date though I am very much liking their new stuff as well and the song that got me hooked onto the album was none other than “Bloodstained Cross”. That song helped me through school and many other major phases in my life and it holds a special place in my heart and I would give nothing more than to hear that song being performed live by Alissa. I remember Angela’s version etched in my mind but with the warm welcome and surprise I received that night on Alissa’s vocal abilities, I wouldn’t think otherwise of her being able to nail the song. I fought my way fairly close to the stage by getting myself into the mini circle pit that was building up slowly in front of me as soon as the familiar riff came on. Jeff Loomis, till today, remains one of the best guitarists in my very own proclaimed Wall of Fame. His tenacity and snazzy riffs is a force to be reckoned with, with the accompaniment of Michael Amott on rhythm, Sharlee D’Angelo on bass, and Daniel Erlandsson on the mighty drums. Alissa slayed the song through and through, through the cause of that few minutes and I was meekly holding my fist in the air as I was filled with nothing but awe. 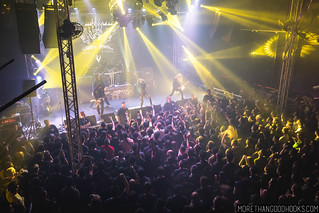 The night’s build up was getting better and better and my legs were close to being jelly-like. Not because of the mosh pit that I got dragged in involuntarily but I was being wow-ed by the band every second into the show. I could’ve remembered it was a much different experience six years ago because of the lack of people attending the show but that night felt like I was out of this world for a moment, celebrating music with people who appreciate each and every aspect of it. It was real with no masks and their music has touched many of the fans that night. 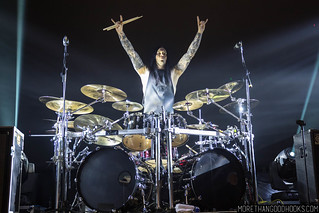 Jeff Loomis’ solo that night which came right after “Avalanche” was spellbinding. Numerous phones were fished out of the pockets of fans while they scurry from side to side to record their guitar hero in all his glory. It was during the encore that the crowd beckoned for the night to not end and it would not have been complete without the popular number that rings familiarity amongst the fans of Arch Enemy, an anthemic tune that can never be missed. That could only be the song titled “Nemesis”. That song got the band the recognition it deserved and has brought them thus far. I mouthed to the lyrics of the song but I was careful enough not to let the excitement get the best of me or I might just ruin the moment for many of the fans out there. Alissa connected well with the crowd as she walked from one end of the stage to the other, making the effort to have eye contact with as many fans as she possibly could. Her energy along with her band was nothing short of electrifying. As soon as the set ends, it felt like the show was only a short period of time. Little did we realise it was a full one and a half hour of full of epic proportions. 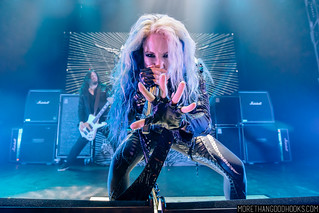 Arch Enemy made that Friday a memorable one. The energy and the music captured are stored at a safe place in my mind. It was easily one of the best metal gigs I have had the chance to attend to since I started going to shows. Arch Enemy was a huge part of me growing up and that night was a constant reminder that I am always thriving forward just as they are in a band. Thank you Inokii for making the night memorable and magical. It was a night of a safe space for metal heads that loved nothing more than music that brings out the best in them.