I’ve always been the person who is more veered towards hard rock or indie music but I do away with my guilty pleasures from time to time. Nothing new but more so something truly evergreen and as and when their song comes on the radio, that 13 year old girl inside me giggles with joy, breaking free as I croon while singing to each and every word to the song. Their music played a huge part of me while growing up. My sister has always been the ‘boyband’ fan and so naturally, I got hooked. The very first song I heard from them titled “Get Down (You’re The One For Me)”,  with its music video featuring this space-like discotheque with five dashing boys clad in clothes that are way too big for them, singing to the camera, staring deep through your soul.

Backstreet Boys, since forming in 1993, set the bar really high for the boys out there. With Nick’s beautiful blonde locks, Howie’s sensual smile, Brian’s angelic voice, Kevin’s seductive eyes and AJ’s badboy attitude, they’re an amalgamation of the boy of many girl’s dreams. Not to mention, with the various mega song hits, up to this day, I get caught singing to “I Want It That Way” more than I actually thought I would.

I was surprised to find people of my age, clad in their homemade shirts and posters with lightsticks around their wrists and face painted with “BSB Forever”. It’s not a strange sight but more of the fact that people of my age aren’t as boring as I thought they would be. Some people may question whether are they still relevant. Well, not to my face or else I won’t hesitate to give a long essay about it, but it says a lot about the night being a sold out show and the massive crowd in attendance. As I made my way to the concert hall, I overheard the bickering of girls literally yelping and reliving their teenage selves that night. 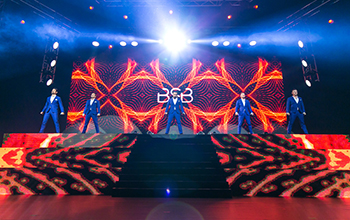 The show started with “The Call”, the first track off their 2000 album, Black & Blue. I was in awe to see that even after all these years, they still have the moves. What was more insane was that they were dancing in their matching suits; I mean, it’s not an easy feat to be dancing in suits but they executed their moves beautifully. It seems like they have never aged! It felt different yet all too familiar. It’s that familiar feeling where you have something tucked away for quite some time, celebrating a night to relive it. That was how I felt when I saw them on stage and see them dancing, which reminded me of how I used to watch them on my sister’s bootleg DVDs and on MTV.

I’ve always remembered Nick as the youngest and most cutest amongst the lot. From what I recall, he was and still is well loved by the many fangirls out there. He has grown up since but still has those killer moves that packs a punch. He welcomed the crowd and you can literally hear the waves of screaming fangirls yelping, crying, and almost out of breath just in awe by his salutations. I joined as well, in my little own way and I could feel I was in for the ride of my life that night. 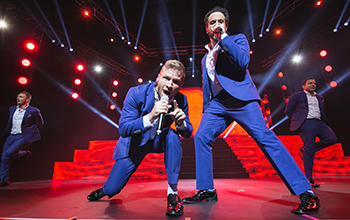 “Incomplete” from a decade ago was a song that became a second skin to me for quite some time. It was one that you can relate to in many ways for many things and when I heard it that night, my heart sank. The gravity of the song brought me to a new high as the crowd set the mood of the track, singing to every lyric. It felt surreal; a tinge of sadness that came egging but was still all round gratifying. It was strung similar to how I remember it being played over and over again. I turn to see tears trickling down the faces of many whom caught my eye in the audience. I soon believed that this song has touched these individuals in one way or another, just as it has impacted and played an important part in my life during a particular phase.

The evening carried on with songs that I was not too familiar with, particularly those off their latest album. It’s still very much them however, with their signature sound. “Show ‘Em (What You’re Made Of)” gave me the impression that it could have been a track off the Millennium record, as does “Permanent Stain”. I didn’t know the lyrics to these songs, but it didn’t stop me from enjoying their performance. 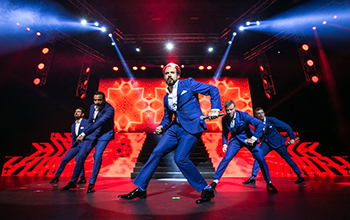 Then came “I’ll Never Break Your Heart”; I kind of scoffed at the title having been reminded of some mindless prattles of yesteryears. The lyrics to the song hits the spot and it created so many expectations for boys who were trying to woo girls then. However, I strongly feel it was a message to them to never break the hearts of people who care for you most. That shouldn’t be something to be thought about, but more so serve as a constant reminder.

We were then surprised with acoustic guitars, a keyboard, and a cajón. I was saying to myself ‘I don’t think I’ve seen them playing any instruments for as long as I can remember’, especially in their older music videos. AJ sat on the cajón while Nick, Howie and Brian took over on the acoustic guitars, and Kevin placed himself nicely behind the keyboards. As Nick began strumming, I could hear a resounding squeal from the crowd. They invited some fans over on stage and have them watch their acoustic set. I would do anything to be on that stage but I was already surprised when I see them working the instruments. They strummed a familiar tune in unison and I hear myself bursting as Brian belted “Even in my heart I see”, and I found myself singing to “Quit Playing Games (With My Heart)” word for word in tandem with their strumming. The lyrics to the song speaks volumes then as it still does now. It was a different feel altogether and it certainly couldn’t get any better than listening to the acoustic version of the song. We were also serenaded with “10,000 Promises” and “Madeleine” in their stripped down versions, and it felt that we can do the night with just the acoustics. It was great nonetheless, and I knew the big finish was coming. 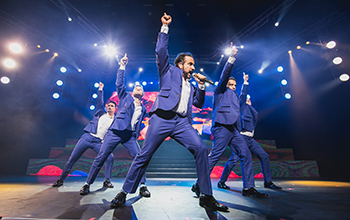 They were teasing us, rhetorically asking the audience, “what if we don’t perform “I Want It That Way”? I cried a little inside because I would give everything to hear the song live, and so my pleads were answered as the familiar tune came on and their dancing stance took charge of the floor. I remembered singing out loud that I turned heads but it didn’t matter because when can I have another night like this? The show ended with a huge bang after being rewarded with two encores of “Everybody (Backstreet’s Back)” and “Larger Than Life”.

Everyone – literally everyone – got on their feet and the wave of hands and light sticks were in sync, celebrating the great night of their childhood fantasies, dancing and crooning to the joys of yesteryears. What would I give to relive another night like this! Thank you Lushington for this show where I forgot to be an adult and became the 13-year-old self with 12 years of memories unleashed that strung well with the night’s event. Even if it’s just a guilty pleasure, it’s something that I wouldn’t let go of.