If you are a fan of post-hardcore (and genres alike), I can bet you Crown The Empire is in your bucket list of bands to see live. The internet blew up when Skesh Entertainment announced The Retrograde Asia Tour 2018 to celebrate their 5-year anniversary (happy anniversary Skesh Entertainment!). Commencing the tour in Taipei, Kuala Lumpur is the last show of the tour held at The Bee, Publika.

To warm up the crowd were local acts Maddthelin, Patriots, and Modescape. With each band performing 5 songs for the crowd, it was just the right amount to pump us up as the night unfolds. It was wonderful to see Maddthelin on stage opening for an international act after what feels like a long time. Formed in 2008, they are no strangers to the scene. The crowd sang along to “Forfeit” and “Ascension”, proving that they are still fresh in the minds of the fans. Patriots are no strangers as well with their energetic set and face-painted face. As Maddthelin and Patriots belt out hardcore tunes, Modescape played a rather mellow set, or as Malaysians would like to call it, a “jiwang” set. The final opening act was Sekumpulan Orang Gila, or better known as SOG. They had the privilege to open for Crown The Empire in all the dates of their Asia tour. A unique song by them is “Sumpah Pendekar” which is written by Datuk M. Nasir, a Malaysian living legend, incorporating traditional tunes with a touch of post-hardcore. 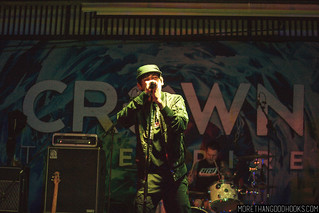 Not long after, the stage was and cleared and geared by the band of the night’s equipment. Chants for Crown The Empire echoed through The Bee as fans eagerly wait for their set. To be frank, my friends and I thought we would sit at the bar throughout their set. But as soon as they kicked off their set with “20/20” followed by “Zero” and “Prisoners of War”, we realized sitting down was a horrible idea. We found ourselves in the middle of the crowd and it didn’t take long for the “2-Steppers” to take over the floor. Me being a fan of theirs since 2011, I was especially looking forward to their classics and the very moment Andrew popped the question, “How long have you known us? 1 year? 5 years?”, I instantly knew the classics were up next. “Memories of a Broken Heart” ensued and the next thing we know, the crowd was screaming along to the opening verse before the mosh pit broke out once again. Next up were “Johnny Ringo” and “Voices”, which were also the first few songs I’ve heard from them. Goosebumps ran up my spine and the helpless smile just couldn’t leave our faces. Bucket list? Check! 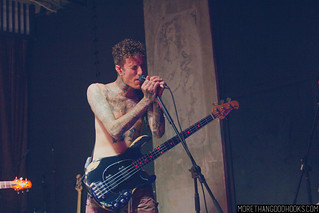 It’s rather rare and risky for a hardcore band, post or metal, to have any ballad or acoustic tracks in their setlist but Crown The Empire were not afraid to take up the challenge as they played one of their more popular recent songs, “Millenia” which Andrew himself referred to as a love song. With no surprise however, the crowd just couldn’t stop singing along to every word and that includes me. I came to the gig not knowing the words to every single song on their setlist, but it didn’t take long for them to get us to sing along immediately as they played “Cross Our Bones” and “Hologram” next. Having been to countless amount of gigs for the past decade, I did not have a very high expectation for the vocals of any hardcore band, but what a revelation for me personally. Andrew’s vocals were just out of this world and Hayden’s screams were just phenomenal. 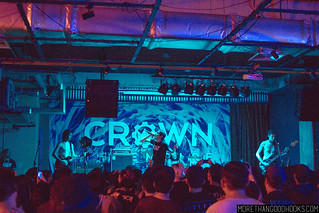 The end of their set was upon us, but it did not stop the crowd from going absolutely nuts when they played “The Fallout” as their “last song” which as usual, was a lie. They came back up on stage after a brief intermission and finished their set strong with “Machines” which racked up over 12 million plays on Spotify. Knowing it was the last song and for real this time, the “2-Steppers” did not hold back and gave it everything they got from the very first guitar riff from Brandon. 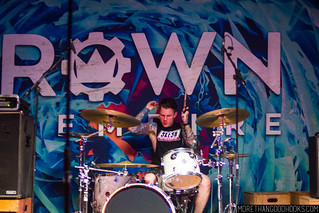 Brent, being the drummer and backbone of the band, was just sending great vibes to the crowd the entire night. It was unfortunate the set was slightly shorter than expected with “Rise of the Runaways” and “Lead Me Out of The Dark” not included. All in all, we came not expecting much from Crown The Empire but we left the gig wanting so much more from them. They are a band that I would travel across the continent to watch again, that’s for sure.