Approximately two hours after the news of there being four more years of the Singapore Grand Prix broke on Friday, Lianne La Havas took the stage to kick-off the 10th edition of the grand event, wielding her beautiful Gibson ES-175, which she used to masterfully nail crisp and vibrantly outlined riffs. 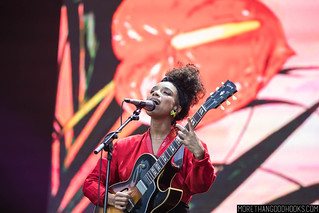 The London-born British singer-songwriter performed songs like “Unstoppable”, “Grow”, and “Green & Gold”, all coming off her second studio album, Blood. She even covered Aretha Franklin’s “I Say a Little Prayer”, her vocals and triumphantly euphonious guitar licks soaring and floating through the darkest reaches of space. 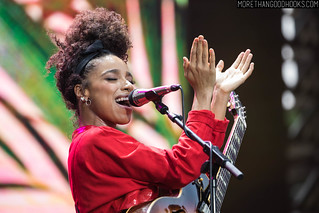 “Think I might need to change the name of this song. Just for today, this song’s called ‘Singapore’,” Lianne quipped, before proceeding to play “Tokyo”. With a Jamaican flag earring adorning her left ear, the unstoppable multi-instrumentalist was clearly a star in the city, encouraging the audience to sing the backing vocals and charming everyone singlehandedly, with her bright smile and coy crowd interaction. More than a heartbeat, she stole.

Closing out the set with “Midnight”, we were all amazed by how clearly the harmonics in the song rang through. And despite the fact that the tune wasn’t accompanied by the bright brass additions which stand out on the studio version, she nevertheless left electricity lingering throughout the field.

Fast-forward a couple of hours of zooming, skidding, and mindless waiting, it finally came time for the moment everyone was waiting for. As the crowd grew at the Padang stage, OneRepublic slowly made their dramatic entrance, with the renowned vocalist and genius lyricist the last to appear. 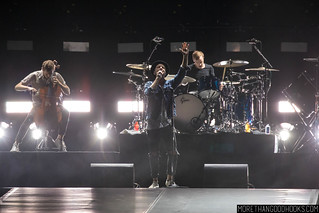 The American pop-rock outfit was formed in Colorado Springs, Colorado, in 2002 by Ryan Tedder and guitarist Zach Filkins. Drummer Eddie Fisher, guitarist Drew Brown, multi-instrumentalist Brent Kutzle and keyboardist and touring musician Brian Willett, completed the lineup, coming together as a potent sonic entity. It was truly inspiring seeing all of them skillfully work multiple instruments and incorporate rare ones like the glockenspiel, cello, and viola into their live performance, all while the audience looked on in absolute awe. The two-hour display of incredible musical ability proved that they are still in their ascendancy even after more than a decade of making music together.

You are the future, OneRepublic, and the future most definitely looks good.

Their carefully calibrated setlist spanned an impressive mélange of hits from their extensive 15-year career and four albums, including songs from their latest studio effort, Oh My My, like “Better”, “Kids”, and “Let’s Hurt Tonight”, as well as unmistakable tunes like “Apologize”, “Stop And Stare”, and “Good Life”. They also performed a couple of songs Ryan wrote for and with other artists, including Beyoncé’s “Halo” and Ed Sheeran’s “Happier”, the latter of which was initially composed on the piano and not the guitar, as Ryan emphasised, to the crowd’s furor. 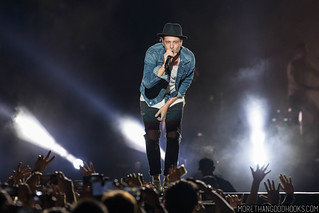 Despite his fame outside of the band, the singer-songwriter seemed humble, and rather than hogging the spotlight, he took some time to introduce the rest of his brothers, giving Zach a birthday to remember by initiating a birthday song sung by 50,000 fans. The birthday boy with “impossible genetics” was left to his own devices at one point, as he delivered a mind-blowing solo, flamenco-style, which was coupled with insane sequencing and percussive elements. 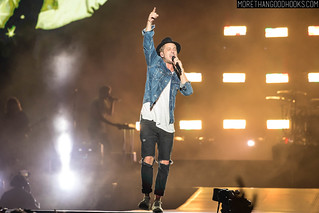 Sloppily dressed in a jacket over a baggy white shirt and tattered jeans, the tousled-haired frontman pulled out all the right moves, which were combined with whip-smart melodic and lyrical turns, lethally controlled shrieks and tempered, reflective crooning. How he managed to sprint all over the stage and back and forth on the runway, while his vocals spanned at least three octaves is beyond me. But the crowd reciprocated nonetheless: fifty thousand, clapping like one.

“This is a beautiful evening in one of the most beautiful cities on earth. This is incredible,” Ryan proclaimed while adoring the skyline and adding that he could actually see himself living in Singapore. We certainly felt the love, and felt it burn. 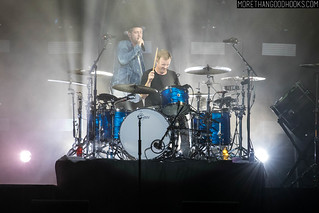 Atop the piano he stood, rattling a tambourine during the last few seconds of “Love Runs Out”, before throwing it and jumping off to meet the rest of the guys for the final bow.

I know I could lie but I’m telling the truth: the band owned every second and completely shredded the rulebook. From Eddie’s percussive mastery on the drums, to the rest of the guys’ wizardry on whichever instrument they were playing, only to be cemented by the explosive synergy between them, it was a spectacle in itself.

And if we only die once,
We sure as hell wanna die with you, OneRepublic.