Being a huge fan of the Marvel Comics character, Silver Surfer, it’s hard to spot any Silver Surfer merchandise anywhere. Imagine my surprise to have spot Silver Surfer on the album cover of Surfing with The Alien while I was rummaging through my father’s vinyl collection! I was about 13 when I first started listening to Satriani’s music after my glorious find in my dad’s stash. My father, seeing how much I was intrigued by the music and the guitars, told me more about Satriani and his stint with Deep Purple. I’ve always loved Deep Purple and how my father never fails to remind me that I used to dance to “Smoke On The Water” in just my diapers.

I picked up guitar when I first heard about Yngwie Malmsteen and it was very hard to keep up with his style; after I found out about Satriani, my style of playing changed. I was more keen on using the overdrive and wah pedals, a more versatile and free way of playing the guitar without much technicalities and flamboyance but just guitar with the crazy on point effects. Ever since, Satriani has been a role model and someone I look up to, along with Eric Johnson, Paul Gilbert, and not forgetting Stevie Ray Vaughan.

I was over the moon when I found out that he was finally coming here after the last supposed gig was cancelled due to the SARS pandemic. What I had in mind was that I’d finally get to see him live in action, working those magical fingers and I was crazy excited to watch him perform Surfing With The Alien. I told myself, having missed Malmsteen when he was here, I won’t miss Satriani for the world. 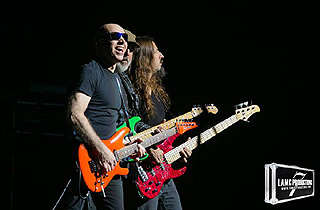 I was not familiar with the first few songs he played until his fourth number, “Unstoppable Momentum”. I remember trying to master that tune on guitar for months and was gifted calloused fingers. The tight schedule I had didn’t allow me to fully master the song, but after hearing and seeing him perform it live that night, the feeling reignited and I was pretty damn sure I’m going to dedicate my annual leave properly towards nailing it on the guitars. The crowd was seated down and I just couldn’t confine myself to the seat so I had to stand and enjoy the gig. People were looking at me but it didn’t bother me one bit; in fact, I had a couple of them joining me to thoroughly enjoy the show. We’re not there to witness someone giving a speech — we were there to rock to the brilliance of Joe Satriani and his band! 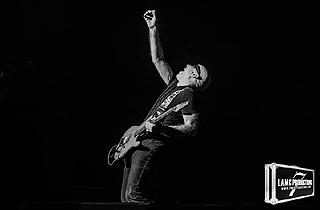 During the drum solo, I had to pick my jaw that dropped to the floor — the drummer was out of this world insane! His fill-ins were crazy amazing, and his double pedaling was in total control. A literal beast on drums, but my favourite was the bassist for the night. With the long tresses and the Randy Blythe goat-like beard, my heart was encased with his constant headbangs and finally rocking to “Surfing With The Alien”. I went almost mental, losing my head. My father’s vinyl was overplayed and truly, 11 years of waiting for that moment was ridiculous but well worth it. I couldn’t be happier than that. 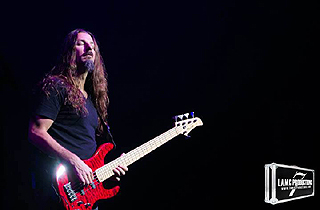 The one that took the cake for the night though, was the epic “Crowd Chant”. The crowd were literally chanting and singing their hearts out to the melody, in tandem with the strumming and shreds. Joe, known to always have his glasses on, took them off on stage and that surprised his band as well, as the bassist grabbed the mic and told the crowd “out of the whole tour journey, this is the first time Joe took off his glasses on stage”. Being the last country on the tour, Singapore deserves one thing different from Satriani after having to wait all these years for him to finally grace our humble shores. 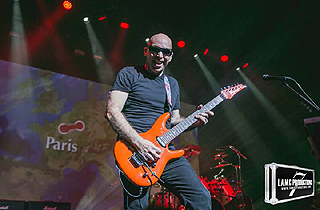 The night was amazing, and one to go into Maisha’s book of unforgettable gigs. I have my father to thank for exposing me to such brilliant artistes, and also LAMC Productions for bringing him here for a show — a performance to go down in history.