Ever since the world was glazed with the sugary sweetness of a Capella by the award-winning musical comedy Pitch Perfect in 2012, people started to wonder, is there anything like that in real life? And there is. Hailing out of Arlington, Texas, five talented vocalists came together in 2011 and formed Pentatonix. Four years later, with over 8 million subscribers on their YouTube page and a Grammy behind their backs, the quintet gave Kuala Lumpur, Malaysia an aca-awesome evening all thanks to BlackCat Live & The Wonderland+.

Performing at Stadium Negara on May 30th for the first time ever in conjunction with their On My Way Home Tour, abbreviated PTX, was presented with 4,000 screaming fans, all present to witness the dynamic performances Pentatonix are famous for. With a brief introduction by a Red FM correspondent followed by thunderous PTX chants, out came Scott Hoying, Mitch Grassi, Kirstie Maldonado, Avi Kaplan, and Kevin Olusola, singing their mashup intro whilst walking up the platform on stage. 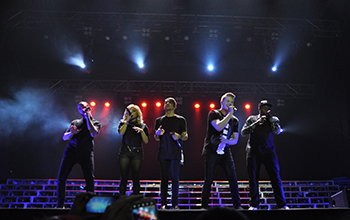 As they reach the end of the platform, they kicked off the show with a cover of Ariana Grande’s “Problem” and it gave me goose bumps. Fans everywhere swayed and sang along to them, even the chaperoning parents! Next came a medley of famous Beyoncé Knowles songs dating back to Queen B’s Destiny’s Child days to her number 1 hit single, “Halo”. It’s hard to believe that they primarily use only their voices to produce instrumentally supported melodies but, believe me, it’s beautiful.

The group performed their first ever song that they arranged as a group which is a cover of Lady Gaga (ft. Beyoncé)’s “Telephone”, followed by a cover mashup of two songs that Sam Smith was featured in and they named their version, “La La Latch”. Other covers include the electrifying “Rather Be” by Clean Bandit (ft. Jess Glynne) and an original Jazmine Sullivan piece, “Love You Long Time”. 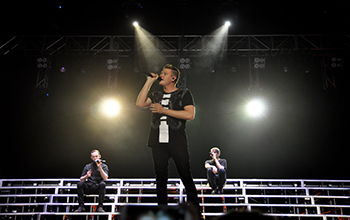 Pentatonix took the opportunity to share origin of PTX with the crowd, from being a trio to adding two more members; together they went on an adventure that is NBC’s The Sing-Off, and emerged as champions in 2011. After a series of misfortunes, the award-winning a Capella group posted their covers on YouTube and became a global sensation ever since. We were in for a treat as the beatboxer, Kevin Olusola, came on stage with his cello. He kick-started his cello recital with his piece called “Julie-O” with grace when suddenly something out of this world happened – he beatboxed whist playing the cello! I have never seen anything like it before. It was, without a doubt, the highlight of the night for me. And with the loudest cheers and applause from the crowd, I am sure everyone was in awe just as I was.

Out came the rest of the members and together, they belted out their rendition of a French piece, “Papaoutai” followed by a powerful “Opera Moment”. Next few performances were covers of top hit singles such as “Four Five Seconds” and a mashup of “Breakfree” and “See Through”. Another favourite of the night was a medley of songs from the 60s, all the way to Carly Rae Jepsen’s “Call Me Maybe” featuring some of the legendary pop sensations such as Journey’s “Don’t Stop Believing”, Queen’s “Bohemian Rhapsody”, and Backstreet Boys’ “I Want It That Way”. It was revolutionary; I mean, with the amount of songs that was featured in the medley? Aca-amazing! 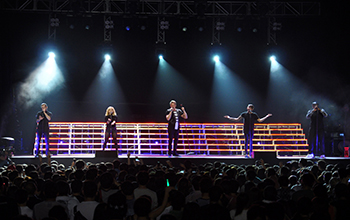 After a whole night of covers and ear-candy medleys, PTX brought the atmosphere down a little with their very own “Standing By” lead by the baritonist, Avi Kaplan. With their request of the crowd to turn on the flashlight of their iPhones/Androids, Stadium Negara was bathed in serenity. They ended the night with another one of theirs, “On My Way Home”! 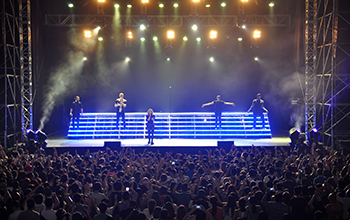 But fret not, encores are coming. As they came back on stage for the last time, the first encore song of the evening is a Christmas number, “That’s Christmas To Me” taken off their platinum-selling Christmas album of the same name. What made the performance so special was that they decided to perform without microphones! The acoustics were amazing and their harmonies can move people to tears.

The final encore of the night is their famous Daft Punk medley which has garnered over 130 million views on YouTube, that left everyone dancing and swaying along to the a Capella beat. Pentatonix is truly a remarkable group. Blew my mind with their voices and medley arrangements. They are one of a kind and I’m sure everyone who was in the crowd, including myself, had an amazing time.