Over the years, I’ve learned to appreciate guitar music more and more as I’ve exposed myself to several different genres of guitar music. I discovered it to be more soothing and the meaning behind the songs expands further than those that are sung in rhythmic tunes. I for one, have always fallen back on Santana for the most favourable guitar music of all times. I grew up listening to my father singing to the lyrics of “Black Magic Woman” and his love for Woodstock. Almost every other weekend, he will be sitting in front of the TV watching his favourite acts from Woodstock and reminisce those times when he was a fine young man.

Back in 2013, when I first saw Santana in our humble little red dot, it was a night that remained in my head for the longest time and I find myself recollecting the memories of that night and when I learned about him coming back, I knew I had to see him again. I started listening to his recently released album ‘Santana IV’ and I fell in love with the first track off the album instantly. “Yambu” brought me back to when I first heard his ‘Supernatural’ album. My mind jostled to the rhythmic tunes and familiar catchy signatures riffs and twangs. It was the only thing I looked forward to during the work week.

The night finally came and I’ve forgotten to eat the whole day and I needed some sugar in my system if I’m going to dance with my two left feet, it would help. I gobbled down two Krispy Kreme donuts and head straight to the show right after. We were ushered to seat just behind the soundbooth and my view was amazing, better than the last show I went for to say the least, and I knew the sound would be amazing from where I was seated at. 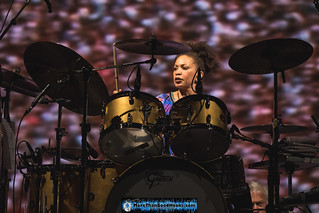 The night started beautifully with one of my main favourite numbers, right off the ‘Supernatural’ album early on in the set. The song “Maria Maria” materialized through the speakers as it reverberated across the hall. A song that until today, would be heard from the kitchen while my mum prepares dinner as she belts to the note of the wonderfully crafted song. I was bopping my head as I mouthed to the lyrics. It wave a sudden wave stream of memories that hit me hard as I recalled listening to the song at different instances in my life and celebrating all the amazing memories that went along. Though the song in itself depicts of a life story of a lady in the Spanish Harlem who ventured out, the riffs and prowess on the guitar by none other than the man himself, Carlos Santana. The effortless belting of the tunes from his guitar woo-ed the crowd through and through as you see feet tapping and head bopping. I spotted a young man clad in singlet and shorts, jumping to the rhythms and very much lost in his own zone. I was mesmerized by the marriage of the various musical instruments demonstrated on stage and the song transitioned into another favourite number of mine from the same album. 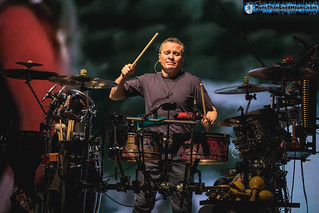 I recently picked up learning the Spanish language after many years of procrastination and I was full on interested on understanding the lyrics to the my favourite spanish sung songs, ultimately “La Bamba” and also “Corazon Espinado” which means “Thorned Heart”. After years of singing to the song and barely understanding what the lyrics meant, I finally got around to understanding each and every word to the lyrics and was enchanted by the craft of the song, how something so sullen and emotional can be turned into a song that makes you want to move your feet even though you’re not much of a dancer. I was seated down and as soon at the song hits the chorus which translates to “Ah my abused heart, ah why does love hurt so much”, upon understanding the meaning of the words, it didn’t stop me from tapping my feet and right infront of me, two individuals whom I’m pretty confident just met each other, started dancing to the song, with the twirls and pulls, the whole works. The strobe lightings and the music married well with the occasion and it was just happy faces all around. 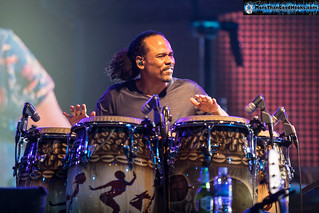 The familiar yet new to the ears of the familiar tunes to John Coltrane’s “A Love Supreme” came into light and every one in the crowd sang to the words “A love supreme, supreme supreme”. The song itself comprises of four parts yet Santana and his league of amazing magicians on their chosen instruments performed the song true to its roots with a twist of their own taste of Samba and rocking edge with the hint of blues. A new appreciation from a true classic from Coltrane which was done justice for. I was smiling and grinning from ear to ear, and the night transitioned into “Evil Ways”. The song has always been close to my heart and hypnotising to say the least. Whenever times are daunting down on me, I plugged in my earphones and close my eyes and shut the world and listen to the rhythm of the guitars as Carlos Santana work his magic with the musical instrument of his choice. And to hear it live again is nothing more than I could ask for. 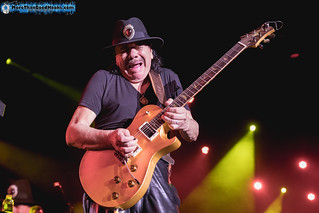 Carlos Santana has always been an advocate of love and peace and he makes sure that we are well informed about it and why he does what he do and to spread love and not to bother about the “unnecessary things”. He promotes peace, harmony, love, and peace all the through his music as he transposes the values into his music, more so felt by the heart than heard by the ears. 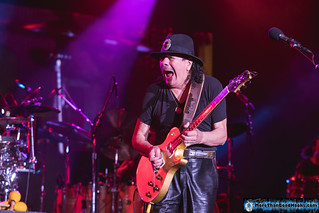 My favourite highlight of the night has got to be when he covered “Ain’t No Sunshine” made popular by many artistes before transitioning into another track of his, which blew my mind. That one song that upon hearing someone mentioning ‘Santana’, the first song that comes to my head from the incessant listens on every other weekend, I felt my whole body lighted and lifted and I was consumed into the music and the riffs. I was beyond ecstatic to have the chance to watch this song performed live before me, not only once, by twice and I couldn’t be more grateful. The hit “Smooth” got me standing up and moving and I almost forgot that I was standing side by side with the many other patrons to the show!

I enjoyed myself through and through that night and my heart felt so full. Who ever thought you could fall in love with music more than what emotions could express for another person. Thank you so much IMC live for the night to remember for many more years to come.