Six years ago was the first time I had the chance to catch this band live at the inaugural Laneway Festival in Singapore held at Fort Canning Park. The band has since bloomed into a force to be reckoned with today, from the time they released their debut album, “Conditions”, in June 2009. The Temper Trap is often spoken of for their anthem “Sweet Disposition”, which was a feature track of the highly watched movie “500 Days of Summer”. I hadn’t paid much attention to material that was released after “Conditions” but somehow their songs find a way to appear in my playlist as and when it’s on a shuffle and the surprise of “Love Lost” always brings back good memories.

Upon learning their return to Singapore to promote their recently released album “Thick As Thieves”, I was intrigued and interested in their new song, anticipating a new direction but still, their main essence of when they started remains evident. Lucky for me, a friend of mine won meet and greet passes and I was offered to join him. Clad in my Ratatat shirt, I wondered whether do they know of the band, a strange thought but possibly because their music direction is pretty similar.

I shook hands with all of them and frontman Dougy pointed out to my shirt saying, “I like that band”. I just smiled and exchanged a few words with him in Bahasa. His face instantaneously lit up as though he was glad to be able to speak to someone in his native tongue. The vibes within the room was a comfortable and it felt as though we were in a club, exchanging a few words just before the show. Their friendliness was something that astounded me as it’s usually a very formal thing to meet a celebrity, let alone a band. We were called to take a photo and all four of them belted “Hey Ratatat” while pointing to my shirt. We exchanged smiles and handshakes and wished them well for their show. I left all smiles as I look forward to the main course of the night.

The lights lit the whole place, casting a shade of ivory purple across the grounds, the smoky background creates the intimate setting as the crowd starts streaming in, stood as close to the stage as they could. I was told that the acoustics for the stage is amazing. It was my first time seeing a band performing at the other stage, with enclosed walls. The setup was promising and even though the crowd grew exponentially, I stood in a spot and I was ready for what’s to come. 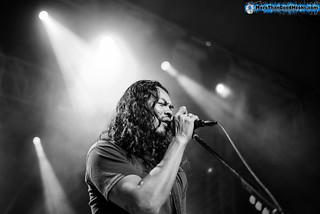 The night started with the title track of the new record, “Thick As Thieves”. I closed my eyes and it felt like as though I was listening to the music on Spotify. Word for word, Dougy enunciated the lyrics beautifully. The lights of various colours lit across the stage as the band worked their magic. I was standing fairly close to the stage but the sound was remarkable and immersive. I closed my eyes as I mouthed to the lyrics, not knowing it could be as soothing as this. I was in my own world and it felt perfect. 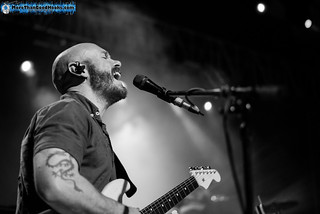 The next song rang across and as I got hold of the familiar riffs, realized it was the song that lurks around in my playlist – none other than “Love Lost”. A classic favourite to many in the crowd as cheers were heard and they sang along in unison. The familiarity brought back many memories of the movies that had the song as part of their soundtrack and a flashback to their 2011 show here with a more intimate setting. 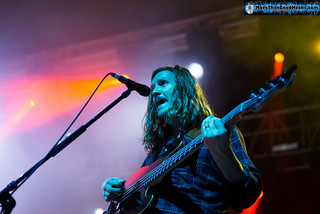 The band also performed “Fall Together” from their latest album, and transitioned into “Trembling Hands” That song speaks to me in ways I can never begin to imagine. The words are strung together so beautifully and relatable in countless ways, having to hear Dougy belt out to the falsetto notes effortlessly, it was surreal as he sang:

How much the chorus can succinctly concise the confusion of an emotion proved to be more than just a mere song. It felt like a well-written diary that was accompanied by the beautiful arrangements with the aid of musical instruments; it was more than just a song for me. It was an unsung anthem of the phase of lives we go through, I speak for myself though, at least.

The song got me emotional through and through and it transposed to the amazingness of “Rabbit Hole”, a song that reminds me a lot of Ratatat and Klaxons influences, bringing me back to the many familiarities, more than I wished I had for the night. It was a flashback to a beautiful past of fun times and happy places. 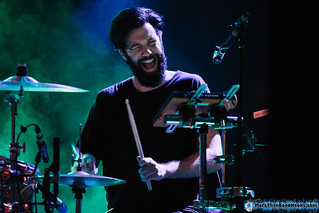 “Summer’s Almost Gone” was another hit-hard song for me as Dougy sang “You’re not coming home but I’m still left alone”. The connection I had to the song was on another ethereal level as I could feel myself relating to it. It was as though there was a telepathy thing going on when the band performed the song and Dougy singing to each and every word of the lyrics that impacted me greatly. Words failed me on the serenity that song brings me at the same time reminding me of what is now for me.

Toby, Joseph, and Jonathon were pure magicians on stage led by Dougy, working the instruments of their choice as the melody marries each other well into a song. There’s never a time where the flow was broken at any instance of the performance. It was akin to a beautifully and meticulously crafted musical with non-stop songs as the crowd sang to the songs they love, letting their hair down to usher in the coming weekend. 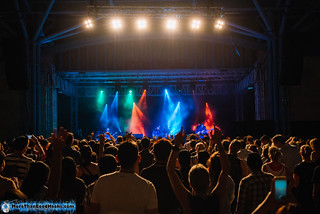 The night wouldn’t be complete without their highly acclaimed number that garnered their fans today, the very song that is an anthem to a Temper Trap fan, “Sweet Disposition”. It was a spellbinding episode as the crowd roared during the encore of the show. Many phones were lifted up to record the song of which they won’t miss the chance to have it recorded to watch it over and over again to relive the amazing night. I smiled from ear to ear as I recalled the rain that greeted us during their 2011 set at Laneway. It was magical despite the rain hitting our faces; it was an experience.

Tonight was not “just a show”, it was an amazing journey, like a well-written book accompanied by the marrying of soothing melodies and simple words that hold so much gravitas, an anthemic performance and an unforgettable takeaway from a well night spent.

Thank you Live Nation Lushington for a spellbinding journey. This night reminded me why I do what I do – for the love of music and the relatable song lyrics that got me through the good times, and the bad.

“A moment, a love
A dream aloud
A kiss, a cry
Our rights
Our wrongs”