Only at a You Me At Six concert will you hear the word “Arsenal” chanted, see more fans sitting on their partners’ shoulders than any other concerts that I’ve been to, and meet girls who are not afraid of getting a couple bruises from moshing and jumping. Going to an YMAS show is like going to a birthday party with unexpected surprises that tend to get a little crazy. These guys are pros at living it up on the road and putting on a great show, and I mean it.

Hailing from UK, members Josh Franceschi, Max Helyer, Chris Miller, Matt Barnes and Dan Flint make up alternative pop rock band You Me At Six. They’ve toured with bands such as Paramore and Parkway Drive, and have decided to perform on Singapore shores before leaving for their Australian Tour. With the announcement of their upcoming album this year, fans were eager and hopeful to hear their new songs, as well as old crowd favorites. 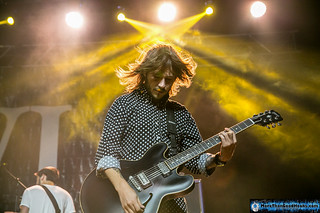 The band did more than just take the stage when they walked out to play what would be a marathon of a 15 song set that encompassed almost every album they’ve put out – they sent the crowd into frenzy. They opened with the hit “Too Young To Feel This Old” from their 2014 album Cavalier Youth before transitioning into some of their more popular older material such as “Underdog” to which the crowd was screaming the chorus along with vocalist Josh. More bands should take note – if you want to set the energy high for the night, start off with some of your heavier tracks and the pits and crowd surfing will follow.

The first two tracks got notified real quick with screams and non-stop headbanging as energy continued from there with the crowd-pleasing “Loverboy”. It was difficult to discern boy screams from girl screams, because everyone screeched with the excitement of an owl that has found its prey; it felt like being stabbed in the eardrums. The point is, the crowd that night was starting to love what they hear and from what was experienced, YMAS loves to mess around with the crowd. 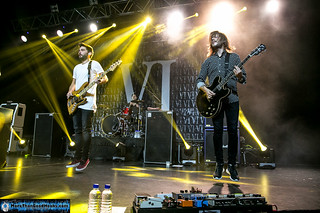 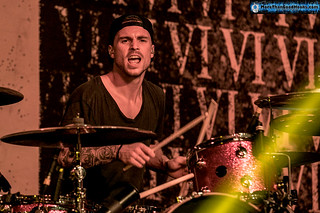 I am always astonished when I go to a gig expecting a certain of crowd or a specific genre and then get an unexpected vibe. In this respect, YMAS are a group that continues to surprise and delight. True, half the audience could be in a teen advert for Converse trainers, but as a whole the audience remained mixed; saying much about the group’s cross-over appeal. The hyperactive Josh jumped around the stage at times like an enthusiastic one-legged freak and his other band mates hardly covered any less ground of The Ground Theatre’s stage. None of the material from their debut album was covered, though. However the heart-wrenching song “Stay With Me”, the epically defiant “Room To Breathe” and “The Swarm” that gave a nod in tempo and rhythm to absolute beauty. “Kiss and Tell” provided the opportunity for a bit of fist punching and there were quirky moments on Josh recreating antics on how other famous bands like Fall Out Boy would have done it. 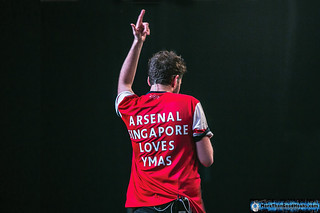 During “Cold Night”, a person clad in an Arsenal shirt exposed himself to demand acknowledgement from Josh, as we all know Josh is a big Arsenal fan. “Well I know you are in love with Arsenal that’s for sure,” as Josh gave a thumbs up. He then requested that each of us to go over another person’s shoulder if you are in love with that person.

However, I’m a sucker for a whole group of people waving their hands or lighters to an atmospheric slow and that’s exactly what happened when “Reckless” was played. There was something magnificently moving about seeing only a dozen of hands swaying and the whole crowd singing the chorus. It was also a nice touch to send a tribute out to Josh’s unfortunate accident with one of his legs with the whole band limping together as well. 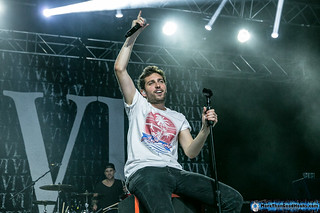 The biggest surprise of the night was how many people raised their hands when asked if this was their first YMAS show. The first-timers were then very fortunate to witness something special. It was a set filled with crowd-connecting moments, as a maturing You Me At Six honed in on what it means to make music these days. Josh kept the serious speeches to a minimum, though he dropped the doozy, “I fucked myself,” as he was referring to his injured leg, which explained why he was seated most of the time. And then there were the nods to You Me At Six’s other frequent reference points: Josh’s limping from side to side with unabashed showmanship and a generational passing of the torch, as Josh urged his spectators to go out with belief in what you can do. And speaking of passing along the torch, the whole band was just as brilliant as advertised in their just-over-an-hour set. Josh and company can rock just as hard as other great bands and have the hits to match; there’s really no reason to believe they couldn’t have stolen the show. 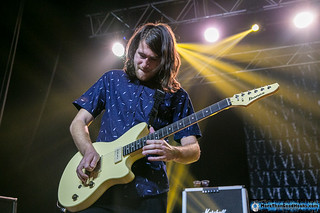 With few exceptions this gig was a high-tempo affair fusing elements of rock, hardcore, and pop with the very appealing emotional quality of Josh’s voice. All in all, a very entertaining and atmospheric evening so far, with its encore looming.

During the break before encore, everywhere I turned all I could hear was excitement over their upcoming set and speculations on how long they might stay in Singapore for. Moments before their set, you could feel the anticipation amongst the crowd. Everyone was readying themselves for a mind blowing finish. 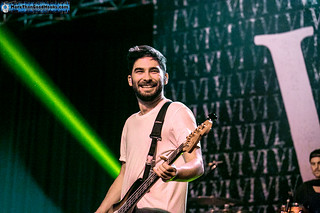 “Bite My Tongue” opened the crowd with palpable energy and a streak of violence. Josh began to move around clutching his right leg as he screamed the song’s notable chorus into the microphone. Now that’s what I call going out again with a bang. The band already had the crowd enthusiastically singing, moshing, and crowd surfing well into “Fresh Start Fever”. It was made very clear that everyone in SCAPE was a YMAS fan. As I glanced at the guys running around in the mosh pit, I could see them singing, with arms open wide, as if this was the last time they’d ever sing again. You Me At Six commanded the stage and the entire venue was at their mercy with their final song “Lived A Lie”. The track offered an excellent melodic chorus with drums clattered and cymbals smashed like a murder of crows taking off. The drop-ins and drop-outs of the verses gave the crowd the chance to jump in unison, as the five piece of YMAS head-banged over the deafening drums, which stood out as the main highlight of the night. 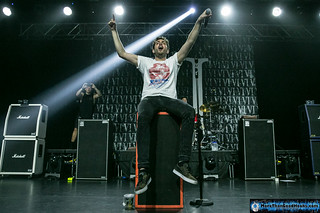 You Me At Six is a band that has progressed throughout their entire career. They started off as post-hardcore and since then have been changing up their sound consistently, never releasing two similar albums. Somehow, it seems they manage to outdo themselves on each of their albums. Every song was greeted with a strong applause and sang passionately by fans both on the balcony and down below. I could definitely see the pain in some of the audience’s faces; You Me At Six was going to be missed without a doubt. YMAS connects with their fans in a way that is almost untouchable and anyone can tell that they truly do appreciate them with every fiber of their being.