After hurdling through a four-hour early morning flight, hotel crisis, and literally withdrawing almost all of your savings, one would think, “what an awful holiday.” But it was the best holiday of my life. Why? I went through all that to see All Time Low and The Maine live in the Philippines.

Located at Coral Way in Pasay City, the Mall of Asia Arena can accommodate up to 20,000 attendees and had housed many incredible events including NBA’s first ever preseason game in Southeast Asia and Philippine’s first UFC event. On August 12th however, the arena was home to All Time Low’s third and The Maine’s fifth shows in Manila. It was truly an honour to be present in one of Southeast Asia’s most iconic venue. I arrived at the arena around 3pm, giddy with excitement, and the fans who were so lucky to purchase “Pulp Royalty” tickets were already lining up (it sold out in under 10 minutes). Additionally, it had come to my attention that VIP ticket holders were also placed in front of the building whereas other ticket holders are placed at the side of the building.

Hours have passed but it was never in agony. The Filipino fans welcomed me with open arms and they are the loveliest people I have ever met. By 6pm, we were allowed to fill in the Mall of Asia Arena and in no time, everyone took their seats. The concert was scheduled to start at 7:30pm but unfortunately, a calamity took place. Some attendees in the VIP section started standing and ran up ahead to get to the barricade that separates the open area and the stage. Hundreds of screaming teenagers abandoned their designated seats to join the others up front. This had caused a delay as the security and event personnel ushered the crowd back to their chairs. Though at a moment everything seemed chaotic, with a switch of a button, calmness took place and everything was in order. Full credit goes to the bouncers for their respectable work in duty.

After some 45 minutes have passed, lights darkened and out came the members of The Maine, hailing from Tempe, Arizona; Kennedy Brock, Pat Kirch, Garrett Nickelsen, Jared Monaco and last but not least, Mr John O’Callaghan himself. The crowd went nuts as they commenced the show with their latest single from their fifth studio album, American Candy, “Miles Away”. The atmosphere got even more emotional as they performed “Run” next, which was taken off their fourth studio album, Forever Halloween. The crowd jumped and screamed to every word! An upbeat version of “Growing Up” was performed next, followed by the first single from the album Black & White which debuted at #16 on the Billboard 200 in 2010, “Inside of You”! It was, by far, the loudest I have heard the crowd scream! It would not be a The Maine show without the song.

“Misery” got everyone chanting “Stay away sweet misery!” which John had sweetly acknowledged after the performance. Before performing the next song, John requested for everyone to keep their phones and cameras in their bags and dance along with him to “Same Suit, Different Tie”! Oh, he danced alright and his constant reference to the crowd as his babies made fans of all ages squeal. One of my personal highlights of the night was when The Maine played “Like We Did (Windows Down)”. It was a soul-stirring performance that left me and almost all of the people in the arena in tears. John sang it beautifully and you cannot miss the emotions he put behind every single song they performed. 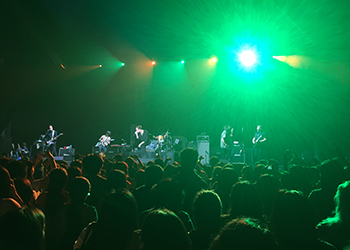 Not only did they play “English Girls” next, they also continued the show with “American Candy” which had received thunderous chants and screams. As the saying goes, all good things must come to an end, The Maine announced that the next song would be their last and promised Manila that this would not be their final visit, closing their set with “Right Girl”. Remember when I said “Inside of You” was the loudest the crowd could go? I was wrong. The crowd went wild and even louder than ever! Towards the end, John climbed the speakers on the left side of the stage and danced on top of it. It was an astonishing performance by The Maine and the fact that they opened for All Time Low, was perfect.

The Maine left us buzzing for more and got us extra thrilled for the next band to take the stage. Crew members took down The Maine’s banner on stage and it was then decorated with All Time Low’s latest album cover banner. The stage was then set for the Baltimore-based pop punk band to glaze their presence on and in no time, Alex Gaskarth, Jack Barakat, Rian Dawson, and Zack Merrick came out opening their set with “Satellite” to screaming fans. The lighting has set the arena to be in an awe-like environment as they continued on with the song. All Time Low quickly changed the tempo of the scene into what they are famous for, a pop punk show with “The Irony of Chocking on a Lifesaver”. The next three tracks gave old fans of the band chills as they were “Lost in Stereo”, “Stella”, and “Damned If I Do Ya (Damned If I Don’t)”, all in subsequent order! The songs were taken from the band’s third studio album, Nothing Personal which debuted at #4 on the Billboard 200 and is one of the their most famous records. 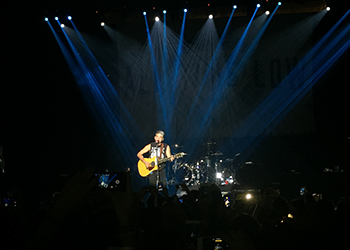 “The next song goes to all the Runaways,” says Alex as they rolled on to “Runaways”. Then came “Weightless”, the song that made everyone fell in love with them. After every track, there was always a comical banter between Alex and Jack consisting of getting naked and personal body parts. They have great chemistry with the crowd though, receiving loud cheers after everything they say. All Time Low then decided to soften to mood and performed the song that features Mark Hoppus of Blink 182, “Tidal Waves”. “Therapy” was performed acoustically by only Alex Gaskarth, and it was beautiful. The crowd sang along to every word and that had created a smile that stretched from ear to ear on Alex’s face. While maintaining his acoustic guitar, Gaskarth started the song “Missing You” alone and was joined by the other members gradually, adding one instrument after another. Next, they brought back the upbeat pop punk feel by performing “The Reckless and The Brave”, followed by “A Love Like War” and “Backseat Serenade”. 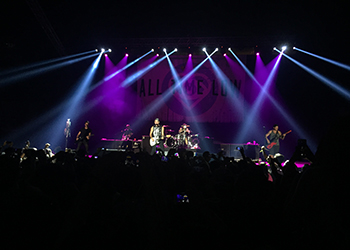 For the next song, Alex asked the question, “Who knows the words to Time Bomb?” It had established a screaming crowd which went louder as he announced that he would be bringing fans up on stage to perform with them. Decked out by one of the lighting equipment he picked up on stage, Alex Gaskarth chose six lucky hustlers by shining the spotlight on them. Both band and the lucky fans were crazy on stage, singing and dancing as they performed. It was a special presentation of the night.

All Time Low then performed their last song “Something’s Gotta Give”, which is the first single of their new album Future Hearts. As they retreated from the stage, the crowd chanted “All Time Low! All Time Low!” with great intensity. Some even stomped their feet to the beat! In no time, the quartet returned to the stage for the encore. 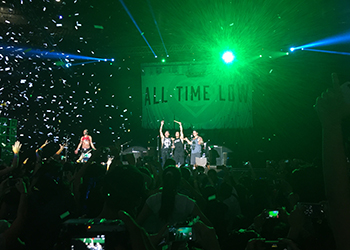 First up was “Kids In The Dark” and the arena was decorated by purple laser beams shooting from the stage; it was incredible to witness such beauty at a concert. Next came my favourite performance of the night, a song from their EP, “Jasey Rae”. It was a shocker and they exclusively played the song for the Filipino fans! After that performance, Jack Barakat, the guitarist, fooled around and started playing the intro to Green Day’s “American Idiot” which became a full-on cover. As the end of the night was approaching, All Time Low said their ‘thank you’s and promised Manila that it will not take another two years for them to come back. They closed the night with the iconic “Dear Maria, Count Me In”.

It was raining confetti as cannons exploded at each end of the stage, giving each and every person at the Mall of Asia Arena a perfect end to a perfect night.