If you were in the scene around the era of 2004/05, you must have heard of Something Corporate and/or Jack’s Mannequin. It would be no surprise if they were your favourite band because let’s face it, they were everyone’s favourite band. Personally, they are STILL my favourite bands! Years have passed and the musical genius responsible for the music that basically represented a part of our lives once upon a time ago – Andrew McMahon is now touring under a new name, Andrew McMahon in The Wilderness.

Imagine my surprise when I came to know the legend himself was set to play Chijmes Hall, Singapore on August 28th. All thanks to Upsurge Productions, the intimate show was a nostalgic event for some as he sang tunes from his previous bands as well as music from the self-titled album, Andrew McMahon in The Wilderness, which was released in 2014. Coinciding with their World Tour 2015, it was Andrew McMahon’s first ever show in South East Asia and I was over the moon to be a part of it.

Located at Victoria Street, the national monument was once a Catholic convent and a convent quarters in the period of World War II. It was also turned into an all-girls school back in the days when it was still ran by French nuns. Now in the present days, the hall where the chapel once stood is the home to many events from weddings, musicals, and recitals. The complex, too, has been restored with dinings and pubs. That night, it was filled with eager fans and other event attendees who were there for the Heineken Cities Festival happening on the same evening. 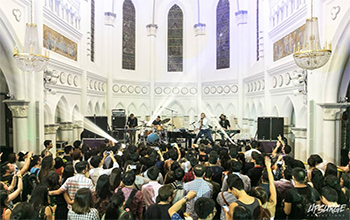 By 7pm, the venue was filling up with enthusiastic fans and approximately half an hour later, out came Andrew McMahon accompanied by Mike Viola, Jake Sinclair, and Jay McMillan. Together, they commenced the night with “Rainy Girl” followed by Jack’s Mannequin’s “Dark Blue”. Fans old and new chanted the words in delight as McMahon played his grand piano with sublime skills. He then rolled on to “High Drive”, a song from the self-titled album, Andrew McMahon in The Wilderness. He used the opportunity to express how blessed he felt to be performing in Singapore and assured the crowd that the night will be a mixture of songs from the past and the present before proceeding to play Something Corporate’s “Ruthless”. 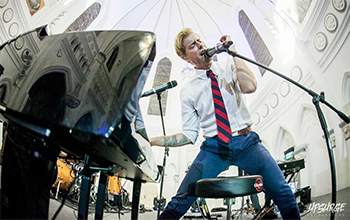 The singer/songwriter/pianist from California then continued the set with “Maps For The Gateway”, Something Corporate’s “Watch The Sky”, and “Halls”. “It’s hot lah,” McMahon then proclaimed to the crowd what he had learnt in his time in Singapore, winning him a round of laughter. He then performed a song that “is the genesis of Jack’s Mannequin”, as stated by McMahon, which is the one and only “Holiday From Real”! Thunderous applause and screams echoed through Chijmes Hall. Next came the whimsical “Driving Through A Dream” and another Jack’s Mannequin number, “The Resolution”. The crowd went wild as they screamed along to every word, leaving the quartet on stage with big smiles that were very hard to miss. 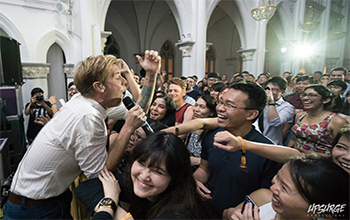 With the same buzzing energy, the crowd chanted along to “Canyon Moon”, a single from Andrew McMahon’s self-titled album. Prior to performing the next song, McMahon unfold the meaning behind it, and the hard times he went through when he wrote it. In 2005, after a visit to a hospital in New York City for a case of laryngitis, the doctors discovered a different diagnosis; acute lymphoblastic leukaemia. Coincidentally, the diagnosis was made on the same day he completed the recording of Jack’s Mannequin’s Everything in Transit album. A few months later, on August 23rd, he released the album and at the same time, received a stem cell transplant for which his sister Katie was a donor. 10 years later, halfway across the world and cancer-free, Andrew McMahon flew his sister down to Singapore and dedicated Jack’s Mannequin’s “Swim” to her. I would be lying if I say I didn’t shed a tear during the performance and I’m sure I wasn’t the only one. He delivered it with pure emotions as he glide his fingers through the piano gracefully. Dear Jack Foundation was established by McMahon in 2006, a non-profit charity organization that objects to raise funds for cancer research. The 72k Challenge was announced in commemoration of the 10th year anniversary of his transplant. For more information, please visit dearjackfoundation.com. 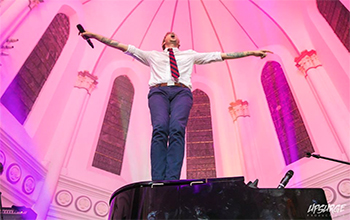 McMahon continued the show with yet another blast from the past – Something Corporate’s “Punk Rock Princess” followed by “Cavanaugh Park” which then flowed onto the new “All Our Lives”. It was only after the show did I found out that Punk Rock Princess was never included in the setlist and was performed exclusively for the Singaporean fans. Judging by the crowd’s reaction to the next song, there is no doubt that it was an honour to have our ears filled with the live performance of Something Corporate’s “I Woke Up In A Car”! The single from the fan-favourite album Leaving Through the Window had everyone screaming to the lyrics! McMahon then whipped out the harmonica, signalling the intro to the last song, Jack’s Mannequin’s “La La Lie”. The crowd went even louder with their deafening chants of ‘La La La’s in the chorus. Cheers were booming through the walls of Chijmes Hall, as McMahon climbed on top of the speakers, stood at the barricade, walked along the corridors of the hall and stepped on the keys of the piano, before standing up on top of it, with a huge grin on his face as he faced the crowd throughout the show. 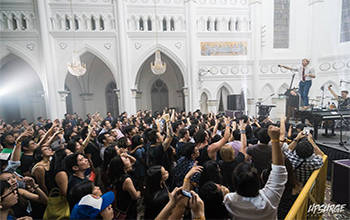 Not long after he left the stage, Andrew McMahon in the Wilderness came out for encores with the first tune being “Cecilia and the Satellite”. The song was named after his daughter and is the first single off the self-titled album. Andrew McMahon ended the night with a song he released under his own name, “Synesthesia”. The happiness revealed on the band’s faces matched every single person in the crowd as they thanked everyone for attending the show.