For the fourth time running, I have to say though, I really think that Avenged Sevenfold – commonly known as A7X – can easily label Singapore as their second home. Not that it’s a bad thing (actually, far from it), we are in cahoots with the willingness of them to come grace our shores time and time again, all within a span of eight years. I am not complaining, at all. In fact, after learning about them coming here again, all I could think of was that I would be able to see Zacky Vengeance again. Despite growing out of the whole “emo” scene then that was hugely popular amongst the masses, the teenage crushes you have for those band members of a particular band still remains, nicely tucked at the corner of your heart and the chance to revive that feeling for another night gets me reminiscing about my 17 year old self, clad in my Jack Daniels No. 7 shirt because I wanted Zacky Vengeance to notice me in the crowd while everyone else was moshing to “Chapter Four”.

The queue, from what I learned, started as early as the night before at 8.30pm. I thought that was almost crazy but I too, joined my friends in the queue on the day itself at noon and I can already see the line snaking to the other side of the venue. I didn’t have my Jack Daniels shirt with me cause I grew out of it and I tried to be ironic by wearing a Misfits shirt. That’s only because I don’t own a A7X shirt, but that shouldn’t matter as much.

I haven’t been by the barricade for gigs ever since Mogwai last year but I found myself running to the the front at this one, like I was 17 all over again. The crowd grew exponentially and I could feel my body being forcefully pressed against the barrier as I hear the profuse “sorry” from the little girl at the back because she had to push me. Cranky me would’ve cursed and swear but that day, I forgot I am 25 and I was just living for the moment. 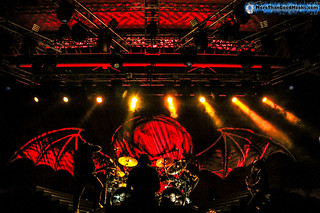 As soon as the backdrop was raised, you can literally hear the crowd roaring as one and chanting “Sevenfold! Sevenfold!” You can feel the energy exuding from the crowd just by the coherent chant and as soon as we hear the prelude, we started singing out hearts out to “Back In Black” by AC/DC. Some might find it weird but “Shepherd of Fire” shares almost a similar intro, hence the deathbats (as their fans are known as) were getting their hyped self and body ready for the show. I was standing right in front of Zacky Vengeance and couldn’t stop smiling because I wanted that to happen eight years ago and this year it was unexpected that I ended up standing at the barricade, positioned just right in front of him. How was I so confident it was where he would be standing? Because I was just right in front of the microphone stand with the “V” emblem stuck onto the pole. 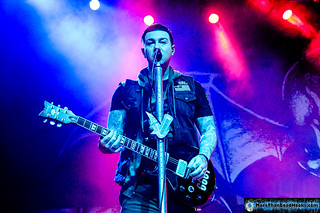 The familiar guitar riffs greeted The Coliseum as the even more familiar guitar hits reverberated across the crowd with the words “Let’s take a moment and break the ice, so my intentions are known” that rang and washed over the sea of fans as the lights came on. There stood, the heroes of yesteryears and the faces of the deathbats glowing and roaring, seeing their teenage heroes greeting them with a familiar favourite number. All I had in my head was “omg Zacky Vengeance” as he swayed with his weapon of my heart’s destruction in his hands, rocking his Baskerville haircut. The night started with a huge bang, an impactful one as our heroes worked their moves across the platform. They may be getting older by the day, but their stage presence and showmanship is certainly not compromised. They are still as energetic as ever and when M. Shadows leaned towards the crowd, the screeching screams grew louder and sharper. 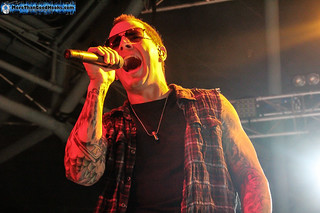 M. Shadows greeted the audience and recollected the number of times they’ve played in Singapore, asking if they had been to their last performance in 2012 and the deafening cheers spoke for itself. You know the feeling is all too familiar; these are the very same fans who make up the crowd of the past shows that I’ve been to. Be it at Fort Canning Park, Max Pavilion, or even The Coliseum – no matter where, the fans will follow. He then welcomed the new deathbats with the aptly titled track “Welcome To The Family”, off their 2010 album Nightmare. 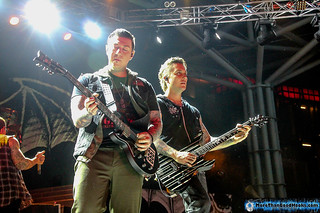 By the barricade, you can see many heads move in unison as we headbanged to the riffs and the hard hits of the drums. The headbanging intensifies as the night grew into its pinnacle when they performed “Chapter Four”. We could feel our bodies pressing hard against the barrier as we knew there was a circle pit growing in the middle of the crowd. I am pretty sure that the crowd was massive, as I recalled the queue when we were waiting in line. To the new deathbats, “Chapter Four” is just another upbeat song but to us, it was the start to many other favourite A7X tracks. This song was the one that got us familiar with the term “moshing” and “circle pit” when we were just wee things, trying to figure out the music genres we were into and the respective etiquettes that come together with the specific genre. I’m overjoyed to say I’ve chosen this genre and I’ve never been more glad to have it stick with me throughout these years. 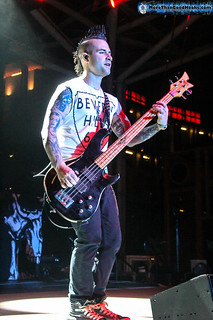 As if that was just it, we were presented with another fan favourite, “Almost Easy”. I turned to my friend each time the verse “I’m not insane, I’m not insane” was sung by M. Shadows who sounded even better after every live show. Watching their live videos over the years, it’s crystal clear that he sounds spectacular both then and now. Johnny Christ was shredding on his bass and I raised my hands along with my friends and bowed to him. He acknowledged the crowd or more so, us, and of course we ended up in giggles. 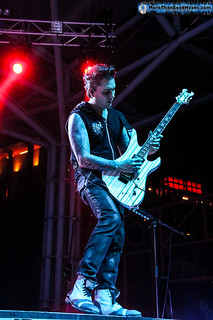 The gig wouldn’t be complete if Synyster Gates didn’t take a moment to captivate the crowd with his insane guitar skills. Working his prowess with all the shredding, tapping, hammer-ons, and gallops on his signature Schecter with the band’s logo as the inlay on his frets, the crowd was wowed and the girls were swooning. It’s like the moment where the role reversals played ‘I fell in love with the boy at the rock show’ except that he’s not just a boy, he’s Synyster Gates and his oh-so charming blue eyes were enough to leave girls falling like flies, which was what happened as the security guards kept pulling people out of the crowd as the mass intensifies. 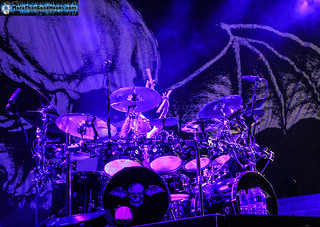 Gates teased us to the intro of “Afterlife” and the next thing I knew, everyone around me were headbanging their heads off and their hearts out. But the first person came to mind was The Rev. Ever since his passing, I was devastated as he was a ball of talent and he brought so much life to the songs, and to replace him would be some large shoes to fill. However, Arin proved that he’s equally as great as The Rev and I knew that The Rev was gracing the night, as he is at every other gig, rocking in the sky as he looks down upon his fans and his band. 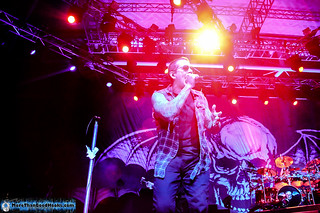 “Unholy Confessions” and “Bat Country” were the first encore songs for the night. I was hoping they would play “Dear God” but it would be too much for this heart to take it in. Word of mouth went around saying that the barricade at the other end of the stage broke as soon as “Unholy Confessions” came on as the mosh pit and the circle pit grew louder and crazier. The two-hour long concert came to an end with “A Little Piece Of Heaven” as the second encore, a crazy start to the year.

As soon as the night was over, we were making our way home, drenched in sweat but with the songs still ringing in our heads and our ears as good as blocked. We were stopped by the girls who were standing behind of us and they apologized for having to push us forward, and asked us for our age. When I said I’m 25, they were shocked, thinking that we were only 18! Indeed, A7X brings out the best in us, regardless of age. I can’t say enough on how great they sounded that night and the recollection of memories flowed through dated in those years from the past when they performed here on smaller stages with crowds that were not as massive as this one.

I caught up with some friends and they shared with me their take of the performance we had just witnessed; everyone unanimously agreed that the show was crazy awesome with the moshing and the intense headbanging. Thank you Live Nation Lushington for the much needed comeback from A7X to our humble tiny red dot, and thank you A7X for your music, your passion and your dedication to your Singaporean deathbats. We await the next few years to see them once again. We might be older than we were yesterday, but our hearts still beat as one for our favourite metal heroes.