Formula 1 roars back once again into town with even bigger international acts for a spectacle not to be missed. For someone with only two studio LPs technically credited to his name, Pharrell Williams has got a hell of a lot of hits.

The producer, singer, rapper, and general musical force hasn’t exactly been resting on his laurels. Like the modern-day Nile Rodgers, Williams has been behind a catalogue of mega hits – from Snoop Dogg to Gwen Stefani, Nelly to Robin Thicke.

I’m unashamed to say that upon entering the venue, I almost immediately ditched my pals and headed to the front of the stage to ensure I had a great spot and was close to the action. I was eager for his performance and to hear his new tracks live.

The energy and boundless enthusiasm that Pharrell displayed was returned by the eager audience who sang along to classics such as “Frontin”, “She Wants To Move”, and “Hollaback Girl” as well as scream their way through popular hits such as “Blurred Lines” and recent single, “Marilyn Monroe” which received a hugely popular reaction from the crowd. 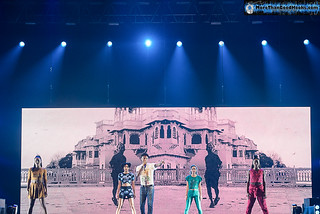 Despite that, there was a fun party vibe at the show, which the crowd seemed to be lapping up, particularly. On the subject of Marilyn Monroe, Pharrell called out for the ‘different’ women in the crowd and actively encouraged us to embrace our unique qualities, something which I believe was a really positive statement to make especially in this day and age. Pharrell further treated the audience to his musings, where he encouraged us to support each other. 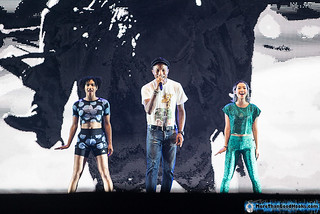 Given that his album is titled G I R L and is dedicated to all the women in his life, it shouldn’t have come a surprise of how much of an advocate he is for women’s rights but it is certainly great to see a pop star not only with a conscience but with intelligent mindset to boot.

Of the songs Williams did sing, few were delivered in their entirety. Short snippets were mixed with familiar earworms from the past decade that he had produced as part of The Neptunes, such as the chorus of Nelly’s “Hot in Herre”. 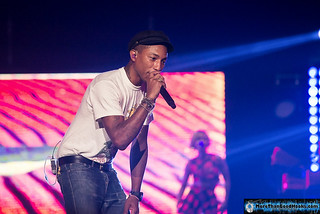 It ends, as they come back for the encore, inevitably with “Happy”. By now it’s a song so intensely overplayed that it needs a good three-year ban to restore its original sentiments, but it’s a song still capable of uniting crowds with predictable, fervent ease nonetheless. Pharrell proves that, in terms of range and repertoire, no other current pop star can touch him. 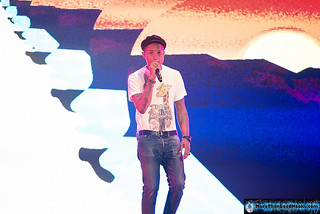 There was some redeeming moments: Williams is an amusing entertainer, with enough charm to almost mask his bizarre stage chatter. His soaring falsetto, possibly the best in the business, was perfect and powerful. As a result, “Happy”, his closing number and persistent chart favourite, was joyous. Williams remained on stage, took a bow and just look at the crowd for a good 5 minutes. It was the sweetest moment of the night.