The final day of the F1 Night Race was a fiery showdown with 21-year-old singer-songwriter Halsey kick-starting the evening. With Singapore being the last stop on the Badlands Tour, which was her first ever headlining tour, Halsey pulled out all the stops to make it a memorable performance. 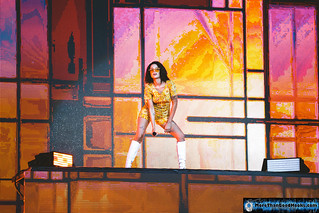 Dripping like a saturated sunrise with her colour-coordinated yellow outfit and orange-tinted sunglasses, Halsey delivered an aesthetically-pleasing performance, with every element crafted to perfection and staged with precision.

Everything was blue when it came to “Colors” and the confetti machines spat out sky-blue confetti, which made for another undeniably Instagram-worthy shot.

Hailing from New Jersey, the art pop songstress absolutely slayed from start to finish. She even broke out in Justin Bieber’s “The Feeling”, which was a track she collaborated on for his fourth studio album Purpose. 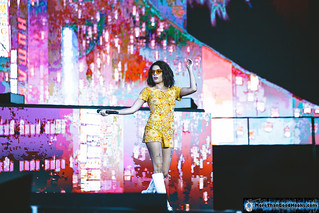 The only letdown was that “New Americana” was left out from the setlist. Was it the recurring marijuana references in the chorus or the shoutout to same-sex marriage in the second verse? Either way, it left the performance incomplete, especially with how recognizable the hit song is. 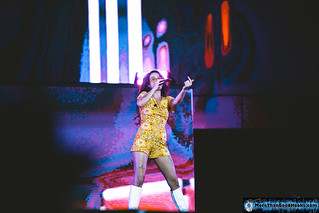 Despite this, her hour-long set was nothing short of empowering, uplifting and downright mesmerizing. She proved that she could hold her own as she belted out The Chainsmokers’ “Closer” and sang Andrew Taggart’s parts as well, feeding off the audience’s energy.

There’s definitely a storm Halsey is brewing and it doesn’t look like it’ll pass any time soon.

Up next was the Las Vegas quartet, Imagine Dragons. Returning to our shores just a year after making their headlining debut at the Indoor Stadium last August, the alt-rockers brought a rousing close to the Singapore Grand Prix. 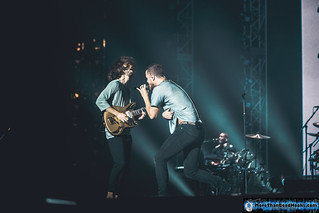 The band performed all their hits, including “Demons”, “It’s Time” and “Shots” as well as more obscure cuts like “Friction”, “I’m So Sorry” and “Gold” which were lapped up all the same by their diehard fanbase, the Firebreathers. 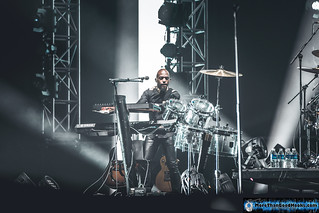 Frontman Dan Reynolds seemed to be moved to tears as he gazed out into the sea of 50,000 faces, completely enthralled with the spirited exhibition the four-piece, together with keyboardist, guitarist and backup vocalist Will Wells, put on. 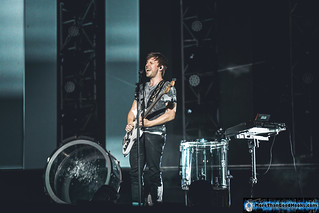 The humble singer-songwriter even brought a 9-year-old boy onstage during “Hopeless Opus” and they both laid down on the runway, gazing at the stars. Reynolds was on top of the world and his light-hearted nature was thrust into the spotlight, bringing smiles to everyone’s faces as he chatted excitedly during their performance. He shared an anecdote about how someone in Singapore gave him a belt because he didn’t have one exclaiming, “That’s more than the clothes off your back!” 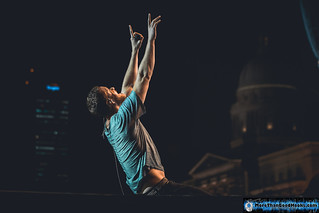 He even teased drummer, Daniel Platzman, about his beard and put the cameraman on the spot by asking him multiple times if he could zoom in further on the gloriously well-groomed mane of hair which adorned his face. It was refreshing to say the least, to see the 6′ 4″ singer delight in such animated mannerisms. 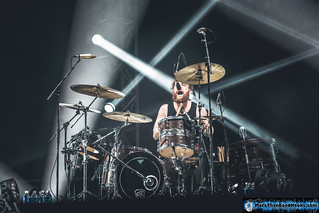 The frontman genuinely declared midway through their set, “I’m from Las Vegas and I feel like I’m home tonight. Thank you for having us.” However, he wasn’t the only one whose personality shone through during their flaming two-hour-long set. Everything guitarist Daniel Wayne Sermon touched turned to gold as he churned out electrifying solos and slick licks whilst bassist Ben McKee got the crowd fired up amidst the blazing flames. No one made any reckless mistakes that night, especially not Platzman, who was a beast behind the kit. 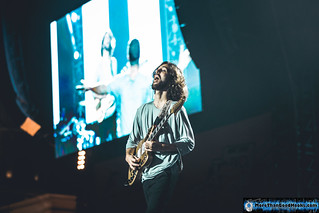 Taking a moment mid-set, Reynolds spoke meaningfully about how music remains the glue which bonds everyone together. He said, “There’s people around the world trying to tear us apart; terrorists trying to put fear into our hearts. But we will not be afraid because love will persist. Music is the one thing that I know that unites people from around the world and brings us all together.” 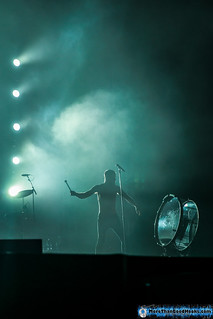 The ending saw the band indulging in a full-blown face-melting pyrotechnic display, for the closing hit “Radioactive”. The fiery onslaught was relentlessly accompanied by each member beating the life out of various drums, whose skins vibrated long after the song ended. 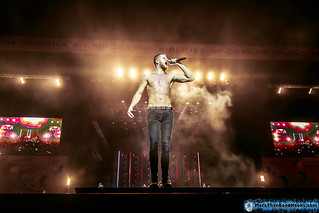 Before they left, Reynolds promised they would return. This was definitely not the last you’ll see of the famed rock outfit.