The word perfectly sums up what Imagine Dragons embodied throughout their performance on Tuesday night. Clad in a black sleeveless jumpsuit nobody else could pull off, frontman Dan Reynolds was unabashedly gracious and humble, communicating to the audience how thankful they were to be playing in Singapore for the first time. “This is quite a hidden treasure you have. Thank you for allowing us to share it with you,” Reynolds genuinely expressed as he spoke of their visit to the Botanical Gardens earlier on in the day. 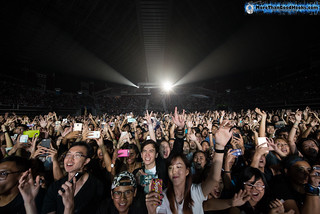 Hailing from Las Vegas, Nevada, the band started their musical journey playing to 20 to 50 people in casino bars up to six hours a night. Those hours evidently paid off as the four Las Vegans now see themselves performing to sold-out stadiums and arenas in parts of the world they’ve never been to before with audiences, whose first language is not even English, singing back every single lyric to them. High off platinum awards for both their debut release, Night Visions, and their sophomore follow-up, Smoke + Mirrors, the band, currently embarking on a worldwide tour with the same name as their latest masterpiece album, is clearly living the dream. 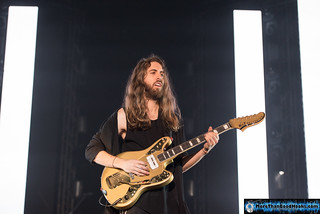 The 17-song setlist was filled with crowd pleasers as well as the newer, more esoteric gems of tunes more familiar to diehard Firebreathers. From the groovy “Friction” with tinges of Middle Eastern vibes to the feel-good “On Top of the World” and the clear crowd favorite “Demons”, Imagine Dragons lit the stage on fire, delivering a high-octane performance replete with effortless guitar solos courtesy of guitarist Wayne Sermon (whose hair was on point). It left the audience members tiptoeing higher just to get a better view of the magic that was happening on the stage. The quartet even busted out a cover of Alphaville’s “Forever Young”, whose nostalgia culminated in a sea of lights as the band took it down a notch. 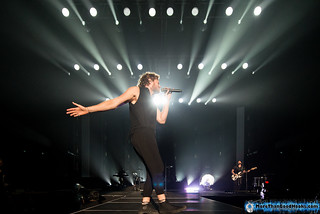 The lasers and strobe lighting were relentless in their breathtaking displays and were accompanied by almost hypnotizing billows of clouds and abstract illustrations on the LED screen behind the band. Also, the two big screens in the stadium impressively covered the band members equally for the benefit of those who weren’t in plain sight of the stage. I don’t think anyone in the audience would be so sorry about spamming their friends and followers’ feeds with concert snaps and posts of their picture perfect life (for about 90 minutes) what with such well-thought-out aesthetic elements. 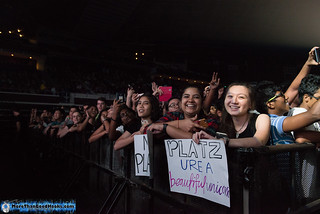 At one point during the show, when Reynolds was looking out into the sea of delighted faces, he spotted a couple of signs in the crowd, one of which read “MOOD: PLATZMAN”. He quickly signaled to the drummer, who jumped out from behind the drum kit to get the signs from the fans in exchange for a drumstick each, leaving them in a state of utter disbelief at what transpired in a matter of minutes. 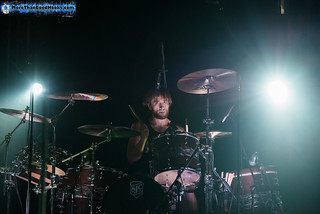 The breakout hit “It’s Time” saw Dan’s signature dance move which brought smiles to fans’ faces as they witnessed how much fun the band was having first-hand. Dan charismatically danced, jumped, and grooved his way into the hearts of an 8,500-strong crowd and made sure to interact with the audience. He even jumped down from the stage to the eruption of screams from the lucky fans in the front row. The frontman, however, wasn’t the only ‘Dan’ who dominated the stage. On the drums, Daniel Platzman was a man on a mission who had no trouble attacking the kit and delivering the most crisp and refined of beats and rhythms, which were made even more unbelievable with bassist, Ben McKee. 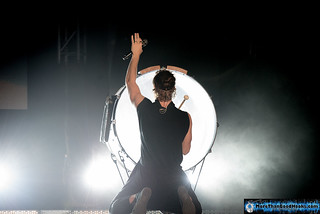 With the stage littered artistically with drums of different timbre, the Grammy-winning song “Radioactive” was placed in a whole new light, coming alive with multifold nuances which the drum breakdown brought. The four members of Imagine Dragons took turns at the different kits and it was most definitely the highlight of the night as it showed not only the sheer versatility and talent of each member but also the camaraderie and synergy between them as they exchanged mallets and transitioned seamlessly to take each other’s places at the various kits, never missing a beat. The giant bass drum that was in the middle of the stage even took a tumble after the electrifying exhibition. 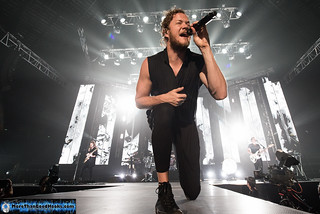 After the encore tune “The Fall”, Imagine Dragons, coupled with their touring musician, William Wells, strode to the front of the stage, joined hands and bowed in a final bid farewell. To answer their question “Is it a dream?”, it wasn’t, but it sure felt like something out of a science fiction movie which was sure to have a sequel and many more installations thereafter.

With a wave goodbye from Reynolds and a loving heart-shaped hand gesture by Platzman, the band took their leave.