Oversized tops, deconstructed pants and fancy headgears were the norm at Ismaya Live’s recent We The Fest. It unsurprisingly was an event for millennial young adults – all conscious about going to the right places, reading the right books and of course, dressing in a way that’s perceived as cool and effortless. In short, We The Fest (WTF) was expectedly a hipster party. 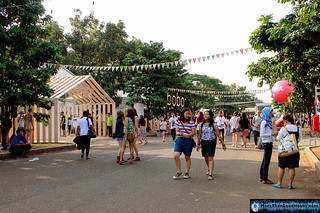 With no set musical theme, the trendy festival boasts UK darling Ellie Goulding as its headliner, and a slew of current familiar names in the pop music scene: Azealia Banks, Banks, and Miami Horror. On another stage was a line-up of high-profile DJ sets including Mayer Hawthorne, RAC, and Havana Brown. Local acts are represented by the usual festival suspects Maliq & D’Essentials and Sore, among others. 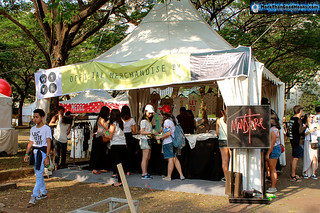 The spacious ground of Parkir Timur Senayan was decorated in modified carnival spirit. Pastel hues dominated, with two major stages erected – Banana Palooza and Clown Chella. Food and fashion booths were aplenty. The eager early crowd rushed in once the gate was opened at noon. Under the clear sky and scorching heat, We The Fest was set out to be a perfect summer festival.

The festival opened with a back-to-back act from local outfits. Rock blues duo The Experience Brothers was up first, followed by Surabaya-originated VOX. Their upbeat performance, belting out songs like “Pengembara”, “Lebih Baik” and “HTSB” got the crowd going amidst the scorching sun. Their rendition of Paul McCartney’s “New” was a sound attempt. 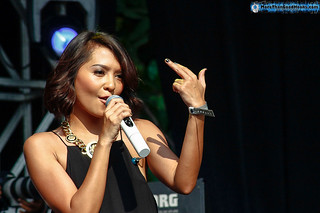 Sexy songstress Lala Karmela, who was clad in a see-through black dress that day, delivered a solid performance with an improved showmanship. From “Morning Star” to “Do You Remember”, Lala seemed in control of her male-dominated spectators “I don’t have one. You should ask the boys!” she joked as a gorilla-masked fan shouted to ask her for bananas.

The vibe mellowed down as Sore (Indonesian for “afternoon”) came on stage. The 12-year-old chamber pop band is one of Indonesia’s biggest indie efforts. Ade Paloh fronted a series of familiar tunes that include “No Fruits for Today”, “Somos Libres”, “Setengah Lima”, and closed their act with “Funk The Hole”. 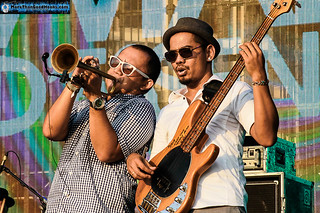 Meanwhile at the Clown Chella stage, experimental jazz troop Maliq & D’Essentials was playing. Besides their staple “Heaven” and “Penasaran”, they also performed songs from their latest album “Musik Pop”, including “Ananda”. Their attractive improvisations were truly a treat to the ears. 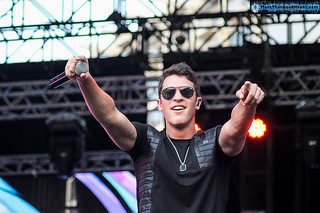 Timeflies, who is radio-famous for their hit “I Choose You”, was up next. Chanting an energetic “Hello Jakarta, this song is for you!”, the American duo opened with “For You”. Throughout the set, they proved that they’re more than just a one hit wonder, with uplifting performances of “Swoon”, “Scotch Up” and Rihanna’s “We Found Love”. 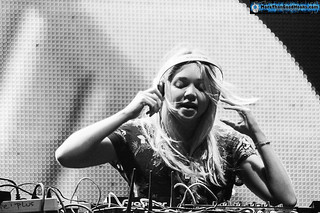 At Banana Palooza, Jessie Andrews heated things up with her remixes. The 22-year-old DJ played some of her most notable remixes to date, including Prince Club’s “Love Strong” and Anna Lunou & Flume’s “I Met You”. At WTF, she introduced a new single, “Slim Fit Jeans”.

Australia’s indietronica effort Miami Horror was one of the acts that the crowd looked forward to the most. Benjamin Plant, Josh Moriarty, Aaron Shanahan and Daniel Whitechurch didn’t disappoint, delivering much-awaited tunes like “Sometimes” (which also made soundtrack to Grand Theft Auto V). “I Look To You”, which was originally recorded with Kimbra, was next. Throughout their slot, Miami Horror was notably friendly, even doing the mandatory crowd selfie before ending the show. 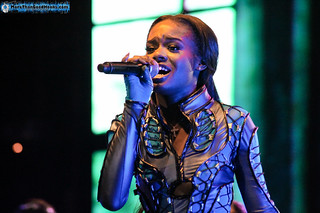 Potty-mouthed Azealia Banks was up next, looking like a modern day mermaid in her sparkly blue playsuit. Contrary to her initial public image, the Harlem rapper was every bit sweet and friendly. Noting that Jakarta was her last stop on her world tour, Banks sang and danced through “BBD”, “Jumanji”, “Liquorice”, “1991” and the anthemic “212”. It was undoubtedly a solid booty-wagging set, however it ended in a rather awkward note with a DJ who played Missy Eliott’s “Work It”.

Simultaneously, Andrew Mayer Cohen (better known as Mayer Hawthorne), was spinning and singing to an ecstatic crowd. “The Walk”, “Crime” and “Her Favourite” were played, while Hawthorne shifted smoothly between his DJ set and microphone. His prime vocals showed why he was worthy of receiving a Grammy nomination. 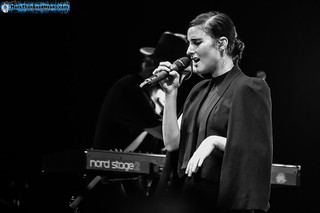 Back at Clown Chella, things took a darker turn with Los Angeles songbird, Banks. Having received raving reviews from the likes of BBC and Fox Weekly, the beautiful Banks belted out sombre tunes with her powerful voice. “Before I Met You”, “Change”, “Brain”, and “Goddess” (from her latest album of the same title) brought the hypnotised crowd to a reflective state of mind. It was a magical moment as many sat down on the festival ground, with closed eyes and slow-bobbing heads. 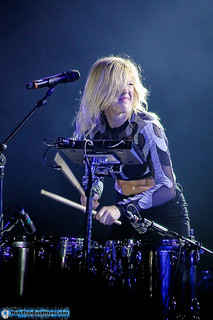 Twenty minutes after 10pm, Ellie Goulding came on stage. The British musician was energetic and full of life in every imaginable sense. Belting out songs from her “Halcyon Days” album including “Figure 8”, “Ritual” and “Goodness Gracious”, her signature pitch shifter vocal effect did not divert from her mesmerising real voice. During “Animal” and “Starry Eyed”, the UK top charter showed off some sexy belly dance moves. A few tracks saw her hitting the percussion too, adding up to an already lively set. 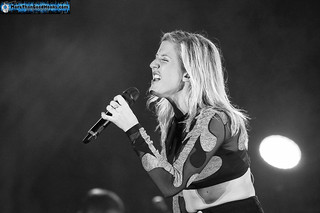 The good vibes Ellie brought since her first onstage appearance was toned down as she picked up the acoustic guitar. “Guns & Horses” and Elton John’s “Your Song” were performed. “You guys are so quiet, you’re making me nervous,” she joked as the crowd softly sang along to her ballads. The stripped down part of the set let Ellie communicated with her fans, her gentle gesture girlish and heart-warming. The short intimate moments definitely left an impression even after the crowd left the festival grounds.

The beat started to hike back up with “The Writer”, which was followed by crowd anthems “Anything Could Happen”, “I Need Your Love”, “You My Everything”, and finally, “Burn”. The dancing and panting crowd cheered really loudly and walked out of the venue with a big smile way past midnight. 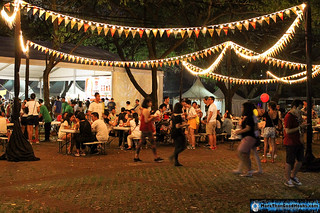 Overall, WTF was unusual in a good way. Besides the top-notch sound system throughout the 12 hours, it was the relaxing vibe that made the world-class musical experience a truly enjoyable one. No one was pushing anyone around; no rowdy behaviour was in sight. A pleasant surprise indeed, having experienced claustrophobic-inducing concerts in Jakarta over time. Everyone was moving to her own beats in her own space. Keep it up, Ismaya Live! Keep it up, Jakartans!