As soon as you hear “Oh, this band is from Sheffield, England”, many would automatically think they’re an indie band. But England is not only known for its indie or metal acts even and in this new day and age, several genres of music are spread across internationally worldwide and one of the most celebrated hardcore bands hails from there and they’re none other than While She Sleeps. Forming in 2006, they have since hopped on the Vans’ Warped Tour wagon and decided to give Southeast Asia a shot, not missing out on fans that are crazy about them, coming from all the way on the other side of the globe.

I personally enjoy their songwriting and I was elated to have the opportunity to interview the band right before the show. The five are made up of quirky, eccentric, and all round funny mid-20s men who could still easily pass off as boys. They greeted us with wigs and shades as they sat on the bar stools, awaiting our questions. And when they were asked “What’s up with the wigs?”, Sean, their guitarist answered convincingly “What wigs? They’re all us. Appearance doesn’t matter.” So much concise truth in a sentence well put together.

I was eager to know what’s the idea or inspiration behind their new album Brainwashed and whether or not was it a transition or a continuation from their This Is Six album. Mat answered “It’s basically about our lives as a whole. We want to set a record that tries to deliver the message about what we’re thinking. Not saying that we know what other people are thinking too but, it’s like when someone listens to it and they agree to it, it creates an awareness for a couple of subjects. We want to let everyone know that you are your own God and not let anyone tell you to do things otherwise.”

This band’s tenacity and dedication is one to be admired as even though Lawrence, better known as Loz, the vocalist of the band underwent a surgery last year, it took them quite some time to complete the album. Given the setback as Loz’s vocals were the pivotal part of putting the album together, they persevered through and it paid off handsomely with such an amazing record that they’ve put out, with strong messages behind each and every lyric to their songs.

Though having gained recognition widely amongst the massive fan base from around the world, they did not forget where they started off and they kept themselves grounded. Knowing that they were once the band that started off at a random basement, playing music to a small crowd, they still very much enjoy the atmosphere of playing underground shows. They also believe strongly that bands need to start somewhere, even local bands. Adam, the drummer, added “Every band started as a local band. They opened for bigger bands. It’s one of the ways for them to get recognized and get out there.”

The night started with our local acts, namely Exhibitors and Tomorrows Ever Ending. Both bands hyped up the crowd for the main course of the night as the audience was seen moshing, body surfing and mic grabbing during the course of their performances. Definitely creating an uplifting mood for the fans that are getting their bodies ready for the band they’ve been waiting for.

It was strange to see barricades being set up for While She Sleeps because they usually insist to do without them given the agility of the band members and their antics on stage but it was one of the mandatory regulations for the venue and something that can’t be compromised. The barricades won’t hinder the crowd’s energy. 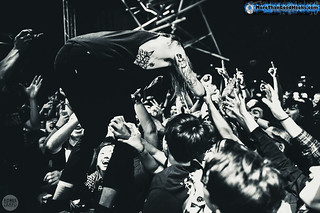 Their set started with “Brainwashed”, a newly found favourite of mine and also, the crowd seemed to be agreeing with me as Loz greeted the fans with his growl and the crowd roared “Brainwashed”. The fans grew intense almost instantaneously as soon as the music starts and the pressure at the front was mental as you can feel the bodies pressing against each other. I was standing just a row behind the barricade and given my stature, I was afraid that I might hurt the lady in front of me with the whole body pushing from behind but I made sure to exercise caution and most importantly, to have fun. 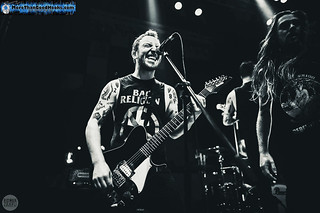 “Death Toll” came on, with the familiar riff that’s hauntingly deep and egging, the crowd was seen headbanging in unison as we sang “Eye for eye, survive”, moshing in our own spots and some were seen body surfing and two stepping their hearts out to their favourite tunes. 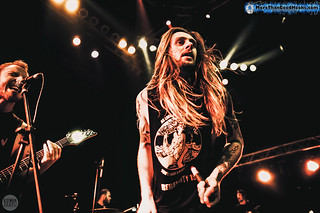 “Our Courage, Our Cancer” is a song that’s close to my heart. Almost a coincidental dictation of a recount of six years back. The lyrics shook my heart as I hung my head low and sang out loud, I closed my eyes and felt as though nothing’s ever changed. He was my inspiration, my guidance, my home. I am still not fully able to recover from the heartbreak of a permanent absence but this song got me through and through as I grit my teeth and continued. The song made my night as I visited the hard to reach places in the past and at that moment, I wish I could hug Loz and tell me how much that song meant to me but I managed to hold on to his ankles as he was reaching out to the crowd, barely balancing on the barricade. It felt surreal. 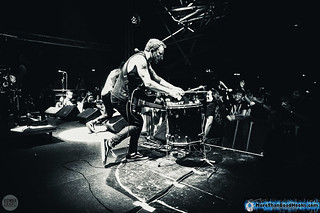 It wouldn’t be a true While She Sleeps show if they didn’t play the two most celebrated songs; “Seven Hills” and “Four Walls”. Loz, Aaran, and Mat jumped into the crowd. Loz was climbing onto the scaffold as he was singing and a fan took over Mat’s guitar as he insists on playing
“Seven Hills” and he executed the song beautifully. It was as though he was part of the band altogether. There was a wall of death, circle pit and crowd surfing happening simultaneously as every one sang into Loz’s mic. There were those who tried as far as to reach him, singing the intro to “Four Walls” as the crowd moved – every single one of us – for the last song of the show. 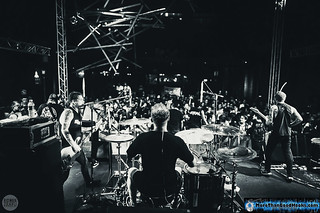 It’s true what Sean said, they just connect with the audience when they were asked what was their idea of a good live performance, “We don’t talk during the performance with the crowd but we know we cannot in a way where we can’t explain, but there’s a strong connection between the crowd and us as a band.”

Despite the weather and the ridiculous haze, the band still came out and greeted their fans after the show and Sean, earlier on said to me when we shook hands, “We’ve met before.” I was pondering when did that happen and after the show he told me that we have indeed met before. I’m sure he met my doppelganger and that’s a first from someone I’ve only known from YouTube videos and listening to their songs. Thank you, Inokii for bringing While She Sleeps and letting us feel like the misfits of society, fit in with the songs as our anthems and the lyrics that help us through the toughest times.

“For the memories we pour down our necks,
For the ones who take our name after us,
For the pain we call love” – Seven Hills