This season however, the championship’s pretty much still up in the air with 7 different drivers winning 13 of the races so far (as of the Italian GP). How would it be possible to turn down a chance to witness a race in one of the most exciting seasons of Formula One? On top of that – this year, Singapore GP brings you even more international acts to sizzle up the weekend-long party to celebrate its fifth year of the night race. With artistes such as Maroon 5, Noel Gallagher’s High Flying Birds, Katy Perry, Jay Chou, Bananarama, and the The Proclaimers, you are in for a treat when Singapore’s largest entertainment production sets up the fantastic Padang Stage along with other venues such as the Esplanade Outdoor Theater for your pre/during/post race parties. 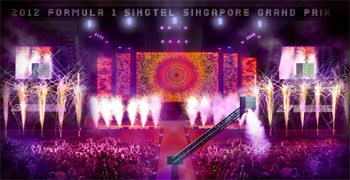 Here is a list detailing what you can expect from the performers as well as the projected set times in this year’s 2012 F1 SingTel Singapore Grand Prix.

Jay Chou– To kick off the weekend right after Free Practice, expect glorious 75 minutes of karaoke worthy hits from this actor/singer/writer/producer/multi-instrumentalist extraordinaire from Taiwan. He is the R&B King from the East and the crowd can witness his brilliant choreography that is guaranteed at every one of his spectacular often sold-out shows.
Jay Chou performs at the Padang Stage on Friday, 21st September. Tickets are from S$58 for a Friday Zone 4 Walkabout ticket.

Maroon 5 – Right after an hour of fast cars scrambling to claim pole position during Qualifying on Saturday, watch as Maroon 5 graces the Padang with 65 minutes of top hit charters one after another. You may experience an odd moment where you find yourself getting “Harder to Breathe” but fear not as Adam Levine is set to charm your hearts for One More Night. 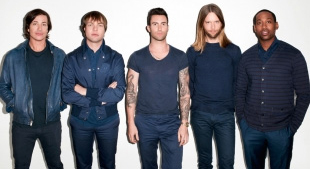 Maroon 5 performs at the Padang Stage on Saturday, 22nd September. Tickets are from S$128 for a Saturday Zone 4 Walkabout ticket to catch Maroon 5, Bananarama (at the Padang Stage), and The Pretenders (at the Esplanade Outdoor Theatre).

Noel Gallagher’s High Flying Birds – Rumour has it that Noel Gallagher turned down the offer to perform during the London Olympics’ Closing Ceremony last month but not for 2012 F1 Singapore SingTel GP! Now you get the chance to watch this 90s Britrock legend saunter up on stage right before the night race begins at 8pm sharp. This set is not to be missed as it is one of the highly anticipated gigs from Noel and his band as they preview songs from their self-titled album, peppered with Oasis gems. What could be more perfect than hearing “Don’t Look Back in Anger” reverberating through the stereos through the circuit?

Noel Gallagher’s High Flying Birds performs at the Padang Stage on Sunday, 23rd September. Tickets are from $168 for a Sunday Zone 4 Walkabout ticket.

Katy Perry – Fresh from her very own movie release Katy Perry: Part of Me, fans can expect to be transported to a worry-free motor ring candy land of sorts where a slate of hits could possibly turn even the frown from drivers that had to unfortunately retire from the race into a happy smile. Her 80-minute performance would be a promised spectacle of laser lights and fireworks that would round off Singapore’s largest entertainment production of the year. Glow sticks and lollipops optional.

Katy Perry performs at the Padang Stage on Sunday, 23rd September. Tickets are from $168 for a Sunday Zone 4 Walkabout ticket. 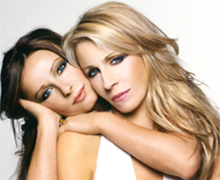 80’s Revival with The Proclaimers, Bananarama and The Pretenders – After previous years’ success with famous 80s acts such as Rick Astley and Boy George were warmly and greatly received by motorsport fans, this year Singapore GP promises to deliver even more acts to keep everyone entertained. Expect “Love in the First Degree”, “I’ll Stand By You” and “500 Miles” to grace your ears along with other familiar favourites that would turn the Village as well as Esplanade Outdoor Theater into a retro dancefloor.

Bananarama performs at the Padang Stage on Saturday, 22nd September. Tickets are from S$128 for a Saturday Zone 4 Walkabout ticket to catch Bananarama, Maroon 5 (at the Padang Stage), and The Pretenders (at the Esplanade Outdoor Theatre). The Proclaimers performs at the Esplanade Outdoor Theater on Sunday, 23rd September. Tickets are from $168 for a Sunday Zone 4 Walkabout ticket.

Spectators of the previous night races in Singapore enjoyed tremendously when earlier performers such as Beyonce, Travis, Mariah Carey, Adam Lambert, Rick Astley, and Shakira graced the playground of motorsport’s finest. Here’s to the deafening roars of the Formula One V8 engines revving to life in the Little Lion City from the 21st – 23rd September!

What a spectacular weekend to look forward to!