THEBRYANSTATE of EMONIGHTSG and Look Ma, No Hands kicked off the night with pop-punk, emo and generally, the scene’s mainstays including Yellowcard’s “Ocean Avenue”, Paramore’s “Misery Business”, and My Chemical Romance’s “Welcome to the Black Parade”, with the unmistakable and instantly recognisable ‘G’ note being both triggering as well as bittersweet. “I’d like to thank all these bands for making my life so much better,” Bryan mentioned mid-set, echoing everyone’s sentiments. 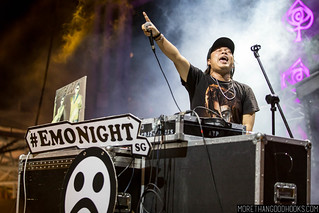 It took four years for All Time Low to return to this (not so) sweet, suburban tomb. Beginning the subsequent leg of their world tour in Singapore, they were pleasantly greeted with die-hard Hustlers showing up in droves, decked in ATL merch and customised embroidered jean jackets. Underneath the stars (and rain), we came alive. 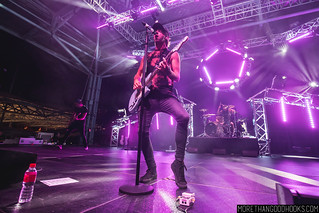 The Maryland natives were on fire and put on an epic show of insanity and heart-thumping beats, undeniably taking the stage by storm. Made up of vocalist Alex Gaskarth, guitarist Jack Barakat, bassist Zack Merrick, drummer Rian Dawson, and multi-instrumentalist and touring member, Bryan Donahue, formerly of Boys Like Girls, All Time Low embodied a certain je ne sais quoi, evidently wanting to do some damage from the get-go. 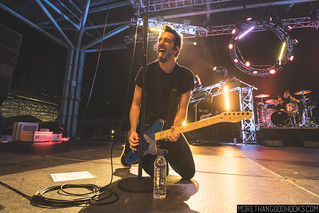 Currently on tour in support of their seventh and latest studio album, Last Young Renegade, the pop-punk pros covered their discography in good measure, skillfully juxtaposing tunes like “Kids In The Dark”, “Backseat Serenade”, “Missing You”, and “Therapy” alongside newer songs like “Drugs and Candy”, “Dirty Laundry”, and “Life of the Party”, with Alex’s voice spanning grit through clarity, and Rian’s hard-hitting stick-work acting as an unwavering anchor to all their hits. 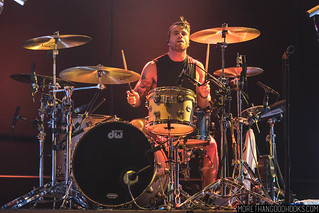 The band’s highly energetic and playful guitarist kept up the jokey small talk throughout the show, at one point mentioning how Rian always gets to decide when to end songs live, being the drummer and all. He was very obviously salty on a summer day (I’m sorry). Barakat even joked about how they’ve changed since the last time they were in Singapore saying, “Alex’s face got worse-looking, but his body got better-looking. Rian is all of a sudden a male model. Zack can lift cars now. And I got hairier.” If you ask me, I’ll take their tattoos, switchblade attitudes, and bubblegum smiles over anything else without a shadow of a doubt. 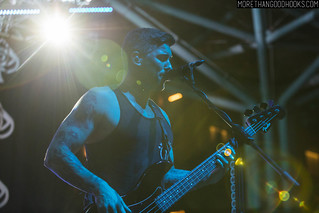 Apart from the coquettish stage banter, their performance was polished and coupled with a sense of experience, inexplicable dexterity, an impressive light show, and airborne guitars, flying into the hands of their technicians. The band kept the audience involved in their singalongs and hey-ohs and Jack interacted with the crowd the most, immersing himself in a sea of strangers during the classic “Dear Maria, Count Me In”. 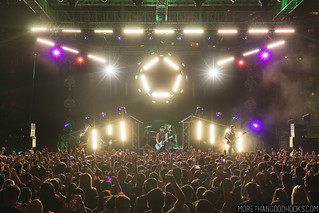 Before we knew it, the heartthrobs were taking their leave after a 90 minute set, which was jam-packed with empowering ferocity and an immeasurable sonic force.

Coming from the girl with the cinderblock garden, they’ll always be one of those bands with the silver lining; and I’m pretty sure it’s perfectly fine to need them morning, night, and day.

I, for one, wouldn’t have it any other way.