At the mere mention of her name, many would start belting out lyrics to her popular numbers, be it melodic or sometimes not too favourable. People from all walks of life would have, at one point of time in their lives, heard of her and her songs and that particular moment that brings back fond memories of yesteryears.

For many, it’s been almost two decades since she made her debut in the music scene and diehard fans have been waiting for the same amount of time for her to grace our shores. Known as the Princess of Pop, Britney Spears never ceases to amaze me with the songs and lyrical styles that she puts out in every album. Her recent album titled Glory was a refreshing and almost breathtaking from the long hiatus from the princess herself and fans were alerted of her comeback. As soon as she announced her show here in Singapore, the Facebook timeline was filled with happy exclamations and joyous cries that their prayers have been answered for her long awaited arrival.

Though the ticket prices were a little more than what we expected, it did not hinder her fans from wanting to be able to stand as close to her as possible on stage. Tickets were snagged as fast as they could as fans camped in front of the computer screen. I remember receiving texts from a close friend of mine saying how it felt so surreal and that he cannot believe that it is finally happening. Someone whom I know and I could confidently say that to know him is to know Britney Spears and I don’t think I’d ever find anyone else that I know is as a big of a fan of Britney Spears as he is.

As I made my way to the concert venue, I saw a stream of Britney fans clad in their Britney merchandise. Some were spotted wearing her renowned outfits in her popular videos such as “Oops!… I Did It Again” and “I’m A Slave 4 U”. The vibe that circulated felt more of a gathering of massive fans as opposed to the usual concert-like atmosphere. I couldn’t deny that I felt a little out of place. Granted that I enjoy Britney’s music just as much as when I was a teenager, I never grew out of it though I’m a true advocate of the heavier music. But I knew I wouldn’t spend my Friday any other way. 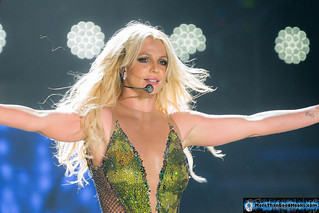 Seated fairly close to the stage, my section, from what I thought would be empty, started filling up like bees swarming around and I was sure that I am sandwiched in between die hard fans as I could see many of them wearing school-like uniforms and the first thing that came through my mind was the video “…Baby One More Time”. 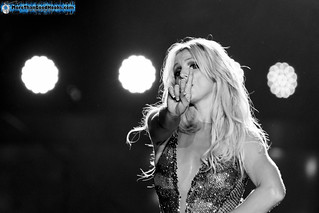 The night started off with the song “Work Bitch” from her 2013 album, Britney Jean, as Britney catwalked across the runway, greeting screaming fans. From where I was seated, I could see the expressions of the fellow fanatics, some of them were seen wiping tears off their faces and some were screaming at the top of their lungs. Evidently, this was something so surreal for the massive fans that no amount of words could describe their feelings.

I could feel it in my heart as I absorbed myself in the moment’s worth. Hearts beating as one and belting to the lyrics, word for word. Nothing can come quite close to it. Although I’m not a huge fan, it was an overwhelming feeling and the night had just begun.

I remember watching multiple replays of “… Baby One More Time” on MTV and my sister kept her eyes glued to the screen each time the music video comes on. She mouthed every lyrics to the song and as time goes by, she even adopted Britney’s sense of style. 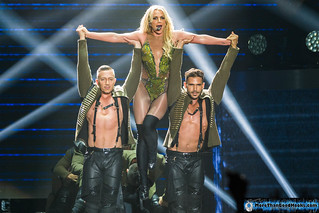 As soon as the familiar riffs rang across the stage, I could literally hear the whole stadium roaring as they cheered on to the very song that groomed them as her diehard fans. I turned my head to see people screaming and singing ever so emotionally and it was just spellbinding.

She didn’t stop there with the fan favourites, and instead went on to “Oops!… I Did It Again” and the image of the red spandex she wore in her music video materialised in my head as she performed the dance moves live. Never would I imagine I would be able to see that in person, let alone be in a mass of exorbitant energy that spread across the Indoor Stadium.

Her dance moves were as nostalgic as I remembered them to be and when she performed her favourite new number titled “Slumber Party”, it was move for move in the music video, leaving her fans in total awe.

My favourite song of the night has got to be “Toxic”, although I would have really loved to watch her perform “Overprotected” from her third album, Britney. Nonetheless, the night was nothing short of magical and I couldn’t phrase words worthy enough of the joy that filled the venue.