Written for the 1995 movie Don Juan DeMarco, the single “Have You Ever Really Loved A Woman?” inevitably became my introduction to Bryan Adams’ music. Growing up in the 90s, I was acquainted with several of his other songs such as “When You’re Gone” and various classic hits from that era.

Yet, I would have never imagined I would someday witness the legendary Canadian rocker live in concert, much less in 2017! Adams made his return to Malaysian shores to promote his 13th studio album, “Get Up”, on a Saturday night on 21st January – the last of four stops on the Southeast Asian leg of the tour before Japan.

Sporting similar attire – a uniform of black blazers, white dress shirts, and black khakis – the 57-year-old musician and his four-piece band commenced the show at 9pm with the up-tempo “Do What Ya Gotta Do” from his latest record, and followed up with his 1991 classic, “Can’t Stop This Thing We Started”.

This tour exhibited a mix of favourite hits, fan-requested numbers, and newer material from his recent album as he took the audience on a musical journey through his extensive career of nearly four decades. Songs such as “Don’t Even Try”, “You Belong To Me”, and “Here I Am” (from the Spirit: Stallion of the Cimarron soundtrack) all held a spot in his massive 30-song setlist.

A smile was gleefully plastered on my face when I recognized the familiar beats of “Heaven”, as it struck a bittersweet chord within to finally be witnessing this performance in a live setting. Visuals of the galaxy and star-studded sky appeared on screen to accompany the track, and fans raised their mobile phones to form a canopy of lights. Many were caught sashaying to the melody of this evergreen tune, with their singing reverberating across the stadium’s four walls.

The anthemic “Summer Of ’69” commanded a standing ovation from fans who shot up from their seats when the riffs of the unmistakable hit came to life. They sang, they screamed, and they were practically worshiping his every move at this point. 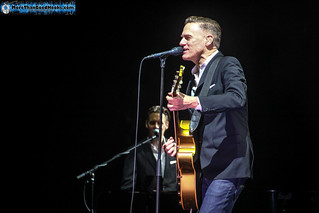 Adams wasn’t lying when he said the next song was deemed to be “one big karaoke session” – it was of course, the timeless track “(Everything I Do) I Do It For You”. Popular during its release, it was also featured in the 1991 film, Robin Hood: Prince of Thieves and went on to become one of his most successful songs, topping music charts worldwide.

Every now and then, he would introduce is band members after a performance, celebrating their talents and showing his appreciation for what they bring to the live show. He endearingly referred to them as “my boys” like a proud parent whenever he gave them a shoutout, and he had every reason to – they displayed incredible showmanship, individually and collectively.

His crowd interaction was to say the least, on point. There was no excessive banter that overshadowed his performance; in fact, he injects the right amount of humour and storytelling that complemented his set each time he connected with the audience. 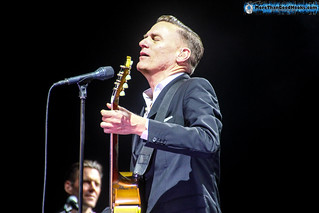 A selfie with the crowd is common occurrence these days, and this concert was no exception. He had to take it twice no less, because the first didn’t quite hit the mark although it’s probably the seasoned photographer in him talking. Adams also spoke of his quest to acquire his Instagram handle (@bryanadams), saying it was originally used and taken by someone in (as you may have guessed), Malaysia.

The A-Lister went on to select two lucky ladies amongst the crowd to dance along to “If Ya Wanna Be Bad – Ya Gotta Be Good”, who had their five minutes of fame on the big screens. A male fan took it upon himself to join them whilst recording this on his phone, and the audience roared with laughter when Adams playfully asked, “Can you get out of the shot, sir? Get out of there!” The musician did not leave the duo empty handed however, and rewarded the participants (Tatiana and Paula) with a goodie bag of t-shirts for their effort.

The ever-familiar “Have You Ever Really Loved A Woman?” finally made its way to the set, which he performed an acoustic version of. It was surreal to say the least, and I was over the moon to have witnessed this live, as it became the highlight of the show for me.

The entertainment did not stop there; he also performed “Please Forgive Me”, requested by a fan by the name of Doris. She made not one, but multiple requests for the song for he proclaimed, “Once would have been enough, not 14 times!” 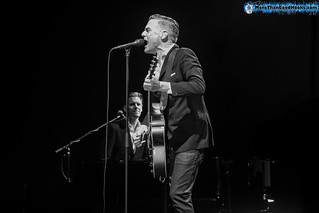 It would have been a shame to miss the stunning montage of headshots he’d requested fans to submit, which accompanied his performance during “Somebody”. Tastefully done, the monochrome ambiance mirrored the weather outside, but not the energy inside the stadium.

As Bryan finished the night with an acoustic rendition of “Straight From The Heart”, the die-hard fans were both thrilled yet heavy-hearted to leave the man. But on a day like this, we know that this was “All For Love” to last us until the next time.