It was a night of nostalgia, serendipity, and good ol’ rock and roll.

No strangers to our sunny island, Daughtry performed here multiple times prior, at the 2010 Singapore Grand Prix, and ION Orchard’s 5th anniversary celebrations. Formed and fronted by Chris Daughtry, who competed on the fifth season of American Idol, the band has sold over 8 million albums in the U.S. alone.

And together with lead guitarist Josh Steely, bassist Josh Paul, rhythm guitarist Brian Craddock, keyboardist Elvio Fernandes, and drummer Brandon Maclin, they proved just why they are such a critically acclaimed outfit, as they segued effortlessly into and out of all the songs on the setlist, only to be welcomed with a raucous response.

The North Carolina native, who emerged from the shadows donning a grey hoodie and leather pants, began singing in local rock bands when he was just 16 years old. And we were treated to the weathered powerhouse pipes we all grew to love since he graced our television screens with his first audition song, The Box Top’s “The Letter”, right from the get-go. 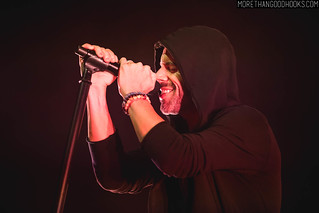 Kicking off the night with a new one titled “Just Found Heaven”, off Cage to Rattle, their fifth studio album set to be released on July 27th, the band surely didn’t let us down, with all four brand new songs sounding polished and poised for chart success. They even included a delicate rendition of U2’s “With or Without You”, as each member dramatically took their designated spots on stage following an interlude, as the song climaxed. 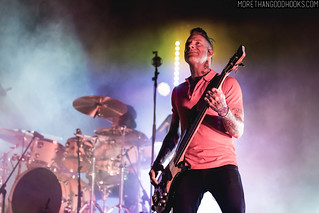 Also performing songs spanning their celebrated 12-year career like “Over You”, “No Surprise”, “Waiting For Superman”, “September”, and “Feels Like Tonight”, the six-piece blazed through hit song after hit song, to the absolute glee of the audience. Buoyed by Fernandes’ airtight harmonies, Paul’s infectious puissance and furious slapping, Steely’s showy solos, Maclin’s explosive percussive dynamics, replete with accuracy and life, and Craddock’s anchoring pulse, their overall sound coalesced into a show of calculated bravura and masterful precision. 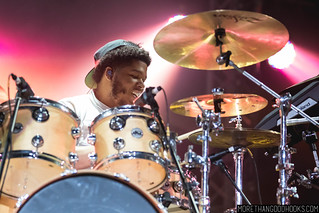 Before launching into their staple single “Home”, the affable singer-songwriter joked with the crowd, telling us he wrote it about 13 years ago, right before he went on the reality TV show and sports entertainment competition, American Ninja Warrior. After the laughter died down, he qualified his previous statement with a refreshing air of Falstaffian wit, saying, “I do wanna go on American Ninja Warrior though. I know I wouldn’t do that great on it, just like I didn’t do that great on American Idol.” 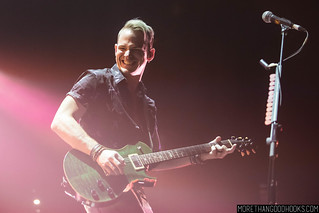 At one point, Chris left the stage to his five comrades who managed to hold their own, leaving the audience transfixed by the display as if it were something transmundane. The frontman later returned as they transitioned into the encore. “We hope that we can come back a lot sooner next time,” he mentioned, as the night eventually culminated in a spirited cover of Prince’s “Purple Rain”, which captured the cynosure of all eyes, as he stood under a single spotlight and completely nailed the vocals with sheer grit and conviction. 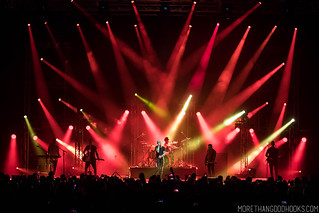 The four-year wait left us clamouring not only for new music, but also for a chance to witness the spectacle of them in a live setting again, letting us reminisce to all our favourite tunes. Though it did take a while for them to return, one thing’s for sure: it was worth it in the end.