Hailing all the way from Winterthur, Zurich, Eluveitie graced our shores for the very first time as many die hard fans have been waiting for their arrival ever since their album ‘Spirit’ was released in 2006. A band made up of eight people (yes, eight of them), each playing the instrument of their choice, ranging from violin to a flute and also the ever so popular mandolin and not forgetting the occasional bagpipe.

A genre they’ve delved into is one of the more unique takes of metal. The growls and hard hitting snares still reserve its spot in this genre with a tinge of symphonic instruments like the flute and the mandolin to give the band the edge of symphonic folk metal. A very interesting take on the colloquial genre of metal as opposed to many new age nu-metal takes on the style of their sound.

I cannot say that I know this genre all too well with the synonymous relation I draw them to Nightwish and occasionally Finntroll but that’s a story for another day. I was prepared to be surprised and have my expectations exceeded as the venue is smaller to that of Nightwish’s and having promised for a 2 hour long show and as the title of the night suggests, ‘an evening with Eluveitie’, I was pretty assured that the night would be nothing less than amazing. 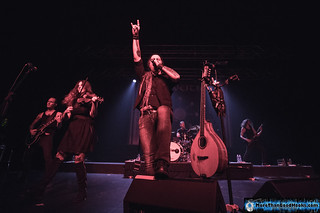 As soon as the lights were dimmed, the band greeted us on stage. All eight of them were clad in black and all of a sudden, I forgot the familiarity of the gig venue to me. It felt theatrical more than a concert to me. The night started out with the intro to “Origins” and the harmony from the flute fuses well together with the guitars and the drums, accentuated into a well-orchestrated performance and not just the normal transition from one song to the other. The sound was omniscient and it felt as though I’ve been swallowed into the beauty of it. I would usually inch closer to the mass ball of crowd, trying to get to the barrier but I surprised myself this time as I stood some distance away from the main stage and just soak in the goodness from where I stood. 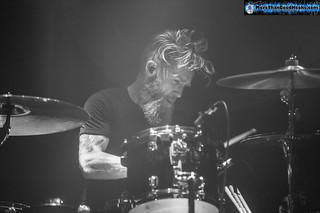 The song that has been playing in my head ever since the night started was “The Call of the Mountains”, a track off their recently released album in 2014 titled ‘Origins’. Anna Murphy took the microphone and spoke to the crowd as we cheered our hearts out. She let us in to a little known fact about the song they’re about to perform and that it was being recorded in five different languages. I could’ve guessed that it was “The Call of the Mountains” but sang in Swiss-German as a track in the bonus version of the album titled “De Ruef vo de Bärge” and true enough, the familiar riffs rang in my ears as the flute serenades the crowd with the ever longing melody that brings you to a different place. The medieval tone to the song sets the mood of charging fists in the air and concerted “Oi Oi Oi” that reverberated across the crowd. 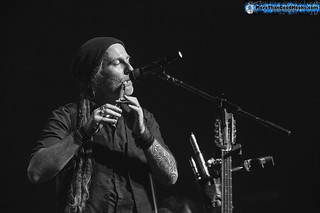 The audience was moving around in their own way, a couple of circle pits at the corners and some were seen attempting a folk dance while “Tegernakô” was playing. My friend let his hair down, of which was initially just a small bun and headbanged to “Kingdom Come Undone” and I went “holy dude”. His mane was glorious and I joined him in the head bang fun till my neck signaled to me that enough was enough with a piercing ache that ran through my neck veins.

The night was taken a notch down as the band tuned down their vivacious performance into an acoustic setting, where the spotlights were shown on every member of the band. 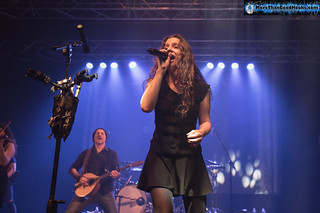 Anna took over the vocals for “Scorched Earth” and I was picturing myself on the set of Lord of The Rings as I walked through the Elvish Kingdom gates. Anna’s impeccable vocals got the crowd’s fullest attention as people fished out their phones and focused the cameras on Anna, making sure they get the song recorded. Her vocal range is one of a kind and I cannot name anyone at the top of my head with comparable vocals to that of Anna’s but all I could say that it was just spellbinding. 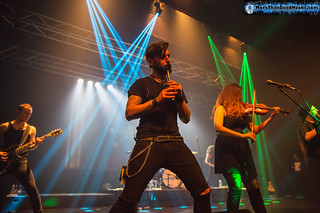 “A Rose For Epona”, a song off the record from ‘Helvetios’ released in 2012 played a pivotal in my life back then when I was going through a phase in life that beckoned a lot of questions. The energy of the song got me through the harder days of life and looking back, it was almost an anthem for me back then. I was looking forward to having the opportunity to listen to that song live that night and my wish was granted. Even though the song was given an acoustic take to it, it still rang bells of yesteryears, making the song more sullen and solemn for me as I hung my head low, reminisced the days where this song was everything I had for myself. 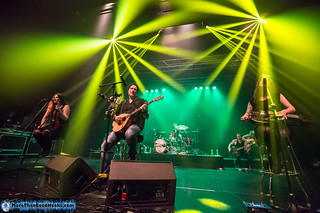 The crew removed the chairs on the stage and I looked to my friend and said “I think they’ll play “Havoc”. They have to play Havoc,” and we both nodded expectantly and soon enough, we caught ourselves running towards the barricade and singing out hearts out while pumping our fists in the air in cohesion. We begged the band for an encore and we were spoiled with the best songs that we could ever be – “Inis Mona”. It was one of the most celebrated songs in their album titled ‘Slania’ released in 2008 where the band was in their prime. A song fit for a king preparing to go for war, the song tells us a story about a lady whom was yearned dearly. We sang in unison and the instruments married as we charged forward. The night felt more alive than any other night. It was not merely us experiencing an amazing concert but it was indeed an evening with the band that I wish will last longer than two hours. It was more of a cultural experience to me as opposed to just watching a band perform their songs; it brought me to an adventure without moving an inch. 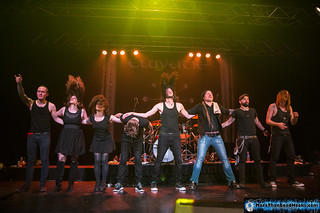 Thank you Impact Live for the amazing night and for making our inner Viking fantasies come to life.