The name Enter Shikari has been heard all around ever since I started to actively attend gigs. Somehow, somewhere, there will be someone asking me to give them a listen and they are from the various people that I meet over the course of six years worth of gigs I’ve attended thus far. It could be an indie gig, and someone will talk about them. But I have to admit one thing, I never really got around to checking their material out until recently when I learned about them coming here for a show so I thought to myself ‘this is finally the time to sit down and listen to Enter Shikari’.

I must admit though that it was not something that I could get myself into liking just by one listen. I usually get hooked onto a song just a few seconds into it but for this band’s material, it was like solving a maths equation. I am not complaining but I appreciate the complexity of the nature of their material. It was also the first time in a very long time, and it struck me that I can’t depose them into a genre. They have totally coined a genre on their own of which I later learned that it was called “Shikari-core”.

The latest album they released personally didn’t sit well to me, at least. It was my two cents worth, because it felt as though they have mellowed down from their last album which left quite the bang and constant conversations about how good they are as a band but I went to the show with no expectations, as I usually do and I am glad I did.

The space, Substation, is one of my favourite venues. We don’t have the luxury of having various show venues given the small spaces that are usually taken up, I was thinking they’d be more fitting in a larger space, like perhaps at the Scape’s Ground Theatre, having played sold out shows in massive venues like the O2 arena, I was sure that this set would be an impending explosion of energy concentrated in a humble venue. I was looking forward to the night. 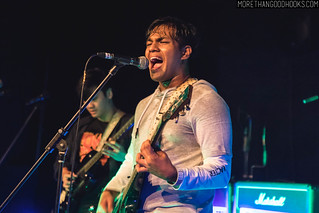 We were graced by our own local talents, the band Boxchild – they reminded me of the good old Goo Goo Dolls and Hawthorne Heights. Something to wind down after a day of hard work is to have someone serenading you with lyrics that you hold close to your heart. I was just immersing myself in the music as I was trying to catch my breath from rushing from work and also beating the heavy storm that halted my journey to the venue. I enjoyed the set as much as I could before I need to get myself loosen up in the pit. In my head, I was still wondering how the moshpit would be like.

The lights dimmed, followed by the coloured lights that littered the hall, a must in a Shikari show, the light works could either leave you mesmerised or send you into a spasm mode. There’s is no in between. Definitely not for the faint of heart. The night started off with a track off their recently released album, The Spark. It was a song that I still could not get into after a few listens over on Spotify but seeing them performing it live felt pretty different. It felt promising of what it would transition into. I moved myself forward to the centre of the crowd, still keeping my distance from the impending moshpit. 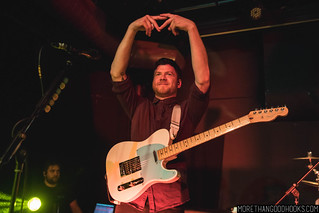 The night picked up when they blessed the crowd with an old favourite titled “Solidarity”. It was off their album titled Common Dreads that got me into the grooves and loops of the band. The momentum in the crowd picked up and broke into a mosh. I was prepared to be exchanging bodily sweats, having to brace hitting on each other, but I was all too confused on how I should act in the moshpit. Some were seen jumping, crab-coring, shuffling. It was an amalgamation of dance of sorts. Not only was I confused, but at the same time, I was surprised and intrigued and I chose a spot right smack in the middle of the venue to watch these fans at their best. 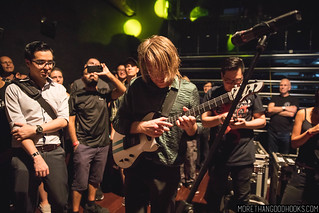 “Radiate” was one of the few songs that my friends got me listening to and assured me that this is something I’ve yet to experience for a band. The odd time signatures and the beat drops are not the conventional ones that I am most acquainted to. Having stood in the middle of the crowd, Rou Reynolds made his way down into the crowd with his microphone and guitar slung over his shoulder, he was making his way to the back of the crowd. My friend was lucky enough to be standing close to him and admiring Rou in all his glory as he serenaded the crowd with that very number – “Radiate”. It felt surreal to have to watch him right before my eyes and showing off his quirky moves. I was sure he was about to lose his footing when my friend at the back was prepared to cushion his fall. 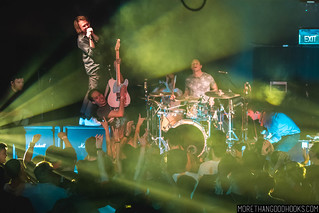 He made his way back to the stage and graced us with many other popular tracks from their repertoire, and went on to say “We have eight minutes to play four songs” and my eyes were wide open having to receive that information, thinking “how is that even possible”, and I kept underestimating this band. They performed a mash up of “Sorry, You’re Not A Winner/Sssnakepit/…Meltdown/Antwerpen” within a span of eight minutes, and the audience went wild. A crowd that I thought could only be imaginable in a club setting but the light shows were enough to give them a reason to let themselves loose. I had to adjourn to the back due to the overwhelming energy from the crowd and stood beside my friend, where Rou stood before.

He asked me “They’re good, right?” and I could just afford to nod. Within that span of the hour and a half, I was being surprised by the second; the stretch that this band could go is beyond any mind could accept. It was a true breath of fresh air.

The night ended with “Live Outside” and it was strange how I didn’t want it to end. I walked out of the venue feeling like I just had a electric shock to a new lease of life and I found a quiet spot and popped in my earphones and started listening to their discography from beginning to the end. I didn’t think I’d appreciate music this much and see a whole different world altogether.

Thank you Street Noise Productions, for the amazing night and making me the fan that I didn’t think I could be.