For the seventh year running, the nights’ race hit our humble shores for the weekend. The only time when people enjoy and are willing to splurge just to hear deafening engines of the F1 cars. There’s more to just the races that was happening; there was of course an impeccable lineup of artistes headlining the F1 concert over the period of the three days, many of which boasts of high stature in the music scene such as John Legend and also the majority veterans’ favourite, Pet Shop Boys. Our local artistes also scored spots in the concert schedule, having to indirectly rub shoulders with the stars of the show.

There were various stages spread across the Zone 4 walkabout, strategically dispersed to provide entertainment at every corner you can get. Though I wasn’t able to split myself to attend every gig which timing coincides with those on different stages, I managed to catch as much performances as I could and I was delightfully surprised at how I was discovering new music and subconsciously bobbing my head to their popular numbers.

The first act for Friday was Reuben Stone, this interesting man reminded me of a queer mismatch between Angus Young and Peter Tosh. It’s probably that sailor hat and those unkempt tresses that got him exuding such aura. That was not all. This individual took a song cover to a whole new level altogether. Covering a song of which many may be a little too generous with their nasty comments on doing a cover which isn’t on par to the vocals of Robert Plant, Reuben did it anyway with his own signature add-ons to the song, giving is a real smooth groove of the reggae beat, making “Stairway to Heaven” which was renamed to “Stairway To Dub” by him a somewhat ‘skank-able’ song to be dancing to. 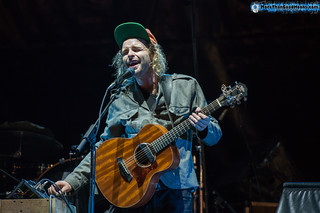 I caught myself lifting my shoulders, up and down in an unordinary fashion but I was enjoying it as a whole. He also calls himself a “Loopologist”, of which my best guess, that means he loves doing looping with the basslines and such, given the synchronization of the beats. Truly a breath of fresh air seeing looping artist divulging into reggae, an almost dying genre of today. I’m always amazed at how people from the land Down Under are just too talented when it comes to the rhythm and beats.

I was initially afraid that I might not enjoy the performances as much as those gigs that I go for, as the idea of having to be mobile and beating the human traffic and the noise from the race heats didn’t seem like I would be able to enjoy much or get the most out of the performances. But I surprised myself yet again by choosing the right venue to sit down and wait for the next performance. Hailing all the way from Guildford, England, the band that offered so much more than what they appeared to be. With the genius moniker of Holy Roller And The Smoking Guns, these young lads brought groove and twangs right back to where it is supposed to be. 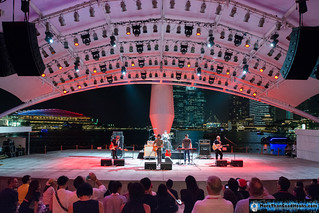 Shying away from most of the commercialized music of today, they brought 60s music back with a modern touch that appeals to the masses, whether young or old; they got the music just apt for the evening. What was even more surprisingly appealing was the awkwardness of the frontman of the band as he walked aimlessly around the stage area. Even so, the consolation of acquiring such a strong powerful voice was what that made the band stood out despite their un-rockstar appearance. It was such a hearty delight, the performance that was delivered by them. One of the songs of the night has got to be “Organ Grinder”.

I made my way slowly to the stage of the main act for the Zone 4 area – Mayday. I did prior research of the band, but I thought to just give it a shot. The area was literally filled with fans all over, some of which seemed like familiar faces I saw earlier in the day, braving the weather by queueing to ensure that they get nothing less than the barrier position. Such dedication from brilliant fans and I chose a spot relatively far behind but I could still catch the performance comfortably. 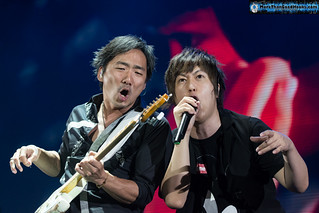 Their music somewhat reminded me of sultry songs of yesteryears that I chanced upon while making a walking trip down a random street and happened to listen upon songs from a vintage boombox, owned by an aged man, just sitting by the side road and watch lives pass by. It brought a comfortable feeling though I can’t understand the words sung on a surface level but it was felt through the course of time. The first night was somewhat strange, but still great nonetheless. 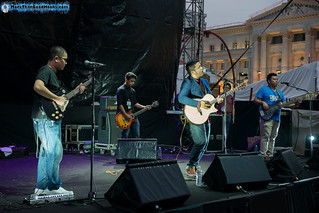 The second day started with a night warm up from Carlos Castaño. I remembered seeing him about a year ago during Music Matters Live and I didn’t get the chance to sit through his performance until that day itself. “Bright Yellow” reminded me so much of the old school slow rock, one that I could easily get off my head was Goo Goo Dolls or Electrico, something closer to home. I was just enjoying the calm serenity of his music before gearing for the night. 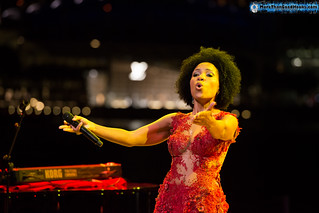 Lura was what I thought, the closest I could get to seeing India Arie; she reminded me so much of her by her appearance. But singing a totally different genre, Lura got the crowd on their feet with the familiar samba tendencies in the songs and also the Cuban feels and beats. I was moving my two left feet awkwardly but nonetheless, I was enjoying myself. It was such a different experience to be there, considering it was not my usually go-to genre. I had genuine fun and as I walked away after the performance, I was unconsciously swaying my body to the rhythm that was etched in my memory. It was still fresh then, and it felt weirdly right.

I was only seven when I was introduced to the band called Take That and my sister got the cassette tape from her allowance. It was a huge achievement considering cassette tapes and CDs were really pricey back in those days. I remembered vividly having a massive crush on Gary Barlow but and even more intense liking for Robbie Williams and I was living vicariously through MTV, watching him win many awards, his music videos, and getting used to seeing him sharing stages with other artistes, particularly Kylie Minogue on the song “Kids”. It was definitely something different from both artiste’s usual dosages but it was refreshing and the song was delightfully catchy, and I caught myself singing along to the songs more than I could ever imagine. 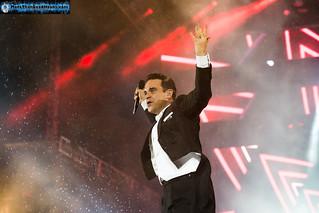 I was trying my best to get as close as I could to the stage at the Padang. It was about living the seven year-old dream, more than a decade ago when I was introduced to this amazing man’s band. I was keeping my fingers crossed for my favourites to be performed that night but told myself that I shouldn’t pin on such high hopes. After waiting and chanting his name, he emerged clad in his formal attire. I could only hold my jaw that dropped exaggeratedly to the ground, thinking how is it possible to look this stunning after having aged through the years. It was as though he had consumed some unknown potion to look years younger than he’s supposed to! I couldn’t care less about the rain that was literally showering me as I was completely drenched from head to toe. I almost forgot about the existence of my gadgets as I was much in awe how the rain didn’t even stop him from performing. He ensured that the rest of the band got as wet as he was on stage as he carried on with his performance all throughout the night. 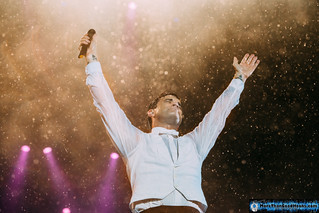 The sky got a little clearer nearing to the end of the performance, but it was such an amazing ambience especially when he serenaded us with “Feel”; it was literally the feels that got me all psyched and at the same time, which shot through my heart with the sudden flashbacks of the past. It touched my heart and sent a smile to my face. And the night ended beautifully with a common favourite and one that’s vastly known across the world – the song “Angel”. A great mood right after the rain, the atmosphere sets close to the spirit of the what had transpired the whole year. There’s always a blessing in disguise if you believe in it hard enough, just like the weather at the start of the performance, which came to an end with a brilliant touch.