It’s the second day of the Singapore Grand Prix Night Race and Maroon 5, the American pop rock band from Los Angeles, California is here to headline for the second time in Singapore. Three time Grammy Award winning and three time American Music Award recipients proved that they are worthy of all the awards that have come their way since their beginning in 1994.

For all of Levine’s lucrative side gigs – TV personality, actor, fashion plate, torso – keeping parties spinning with Maroon 5 remains the job he does best. He was in motion all night, skipping like a spirit squad captain around the futuristically lit stage. Levine is 20 times more famous than any other member of Maroon 5, and so for most of the night, the catwalk and spotlight were all his – even if he didn’t reach the arrow’s oversized tip until the encore (such a tease, that Adam!). 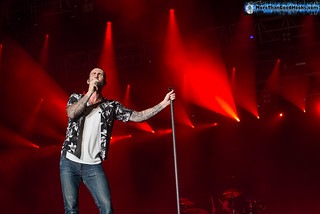 Howling starts as the band played the first few notes of “Animals”. Adam Levine takes centre stage and begins what becomes an hour of solid vocals and showmanship that is pushed ferociously along by a band playing every note to its fullest loudest point.

Songs from slightly more brooding new album V, fit seamlessly alongside easy-breezy favourites like the loping “Sunday Morning” and crisp “This Love”, which the entire arena kicked off a cappella. 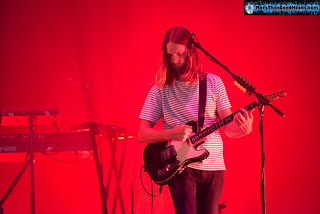 The best moment of the night came when he responded to the crowd’s energy with a soulful, acoustic encore of “She Will Be Loved”. Just a guitar and his four octave vocal range reminding us how timeless that song is. 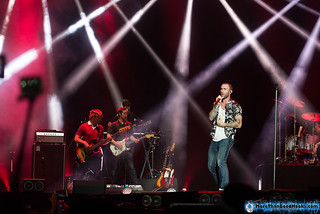 Good looks, endless charm, and tight jeans in tow, he knew how to throw a concert and he knew how to end it all with a bang. He gave what the fans have been waiting for (some of which since the moment the gates opened!) – a little “Sugar”. Well, more than a little. It got a little harder to breathe as he gave in to the heat, got topless while shredding on a neon pink guitar, showing us exactly why he was named People’s Sexiest Man Alive in 2013. If it was up to me, he should get that every year; one for every tattoo this man has.

Surprises in this jungle? Not really. Packs of wild Levine fans, though, were glad to voice their approval.