Those who were still hysteric from OneRepublic’s performance on Friday found no time to dwell in that ecstasy as Saturday offered more entertainment that lined up the entire evening.

Arguably the busiest day out of the weekend, the crowd was fortunately scattered across the race grounds from Zones 1 to 4. Most people have booked tickets to see the two heavy weights – Ariana Grande and The Chainsmokers, and since they both start after dark, the festival grounds still felt relatively peaceful in the evening.

However, it would have been a mistake to come in just for the two headliners, as other artistes, local and non-local alike, were worth passing time with. 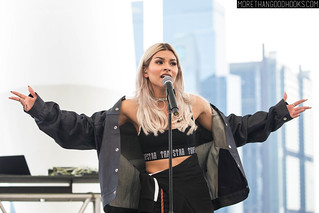 Tabitha Nauser, a local talent that rose from the shadows since Singapore Idol 2009, is back with a punch. The 25-year-old Sony Entertainment artiste recently released her single “Bulletproof”, which she happily performed at the Esplanade Outdoor Theatre. Flanked by two dancers, this Singaporean with a mixed parentage looked like our country’s own Rihanna. She sealed that impression by doing one of Rihanna’s song, “Love On The Brain”. 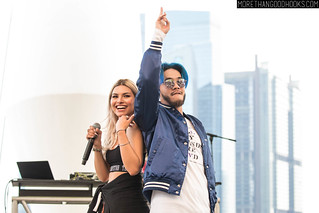 Since she was sharing the stage with our other locally groomed talent Shigga Shay, the two of them did a mash-up together before Tabitha left the spotlight. Shigga was backed by his personal DJ NashD, and he repeatedly reminded the audience of his patriotism, “Ima born and raised in Singapore y’all.” This was reiterated when he performed “Lim Peh”, as the starting verse goes, “Wa si Lion City kia”. That song resonated with the local ‘uncles’ and ‘aunties’ who did not miss their chance to participate in F1. Probably for the first time, that generation could appreciate rap because of Hokkien lyrics like “Kopi Siew Dai” (coffee with less sugar) and “wah meng ti wah meng ti meng ga jiak lo ti” (watching a Taiwanese drama while eating bread). 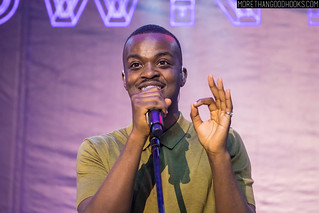 The highly anticipated performance by George the Poet took place at Downstage, and he appeared in all simplicity – in a Polo tee-shirt, pants, and his pianist. Despite being free of stage cinematics, he let his poetry win the crowd over. Carefully thought through and delivered without bated breath, George redefined music for the audience. His pianist played a background piece to his readings, which were personal recounts relating to the history of F1, that racing fans would appreciate.

Our globally renowned disco Zouk appointed familiar DJ Andrew Tang to play during the intersessions between acts, and that kept the teenage crowd busy. The Caucasian teenagers uninhibitedly took to the dance floor the minute Andrew laid his first EDM number and the onlookers formed what look liked a ‘circle of death’ in a mosh pit, only that they were digitally and not physically snapping the ravers.

Masses did not have to wait long after the sun descended as Ariana Grande went on at 8pm. The fan zone was as expected, packed full and girly screams of anticipation could be heard from afar. To heighten the atmosphere, a video with a countdown timer flashed on the TV screens before Ariana’s appearance. Her emergence was victorious, because it signified that the haters who appealed for her to be banned had failed. Knowing how controversial her video content might be, the crowd might have been waiting to see something unconventional on the screens, but everything was PG and non-debatable.

Her presence on stage was glorious and her vocals immaculate. Her perfect note pitching and her synchronised moving did not reveal any discomfort from donning jackets in our infamous humidity. Did she intend any puns when she sang “We got that hot love” from “Bad Decisions”? Scheduled for just 60 minutes, she made sure the Arianators who came for her were happy. She delivered all the hits such as “One Last Time”, “Love Me Harder”, and “Into You”. Never once was she caught on the big screens dripping sweat. Do her fans think she’s a goddess? Even more so now, as she established an image of a deity who doesn’t sweat.

The 50,000 people who were packed to see Ariana did not leave after, because they stayed for the qualifying rounds of the Formula One race, if not for The Chainsmokers. The duo raised the bar for energy levels as the night culminated with a 90-minute dance party that spread beyond the fan zone and all over the Padang field. Andrew Taggart and Alex Pall are not known for their vocals but they took the mic and sang over a couple of tracks. 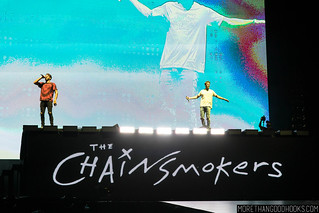 Cinematics and pyrotechnics complemented the vibe and the thumping music that was sent miles across the south side of Singapore. As though the duo knew that they were many of people who were part of the “accidental crowd”, they hollered, “Where are my real Chainsmoker fans? Make some noise!” Regardless, they partied as hard for the now 60,000 people, who might have streamed over from Zone 1. 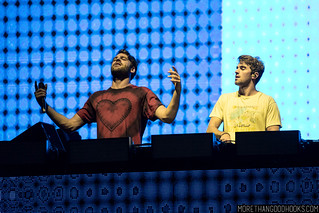 Their set was not the least bit predictable as they mixed their tracks with songs from System of a Down, The Chemical Brothers, and other pop singers. The groove moved from dubstep to R&B, making a statement that genres don’t matter, only good mixing does.

The night quietened down close to midnight and the crowds retreated from the eventful day to prepare for the last day of the race. Memorable moments, which are too many to count, pass fast and furiously over the F1 weekend, just like how it should be on the race track.