It started with an almost apocalyptic ambience, courtesy of a very dramatic soundtrack, which eventually segued into a fairytale-like peaceful paradise, before the band finally appeared on stage, to a full house of people smiling at the chance just to see them again. 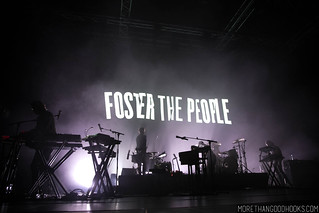 Consisting of vocalist Mark Foster, guitarist Sean Cimino, keyboardist Isom Innis, drummer Mark Pontius, and touring musicians Phil Danyew and Tyler Halford, it was a struggle to pinpoint each of their individual roles – they weren’t just isolated musicians, they were Foster the People; a collective, a unit. The LA natives last graced our shores in 2012, and the six years they’ve been away were filled with mere pixelated dreams of their eventual return.

With all six musicians on stage collaborating to deliver ruthless refrain after ruthless refrain, paying attention to every little detail (yes, even the inclusion of a pair of maracas), Foster the People’s performance was one of precision, calculated and perfected, surpassing the quality you’d expect from studio recordings even.

The near arrogant stage persona Foster embraced was charming in a way, as he confidently strode the length of the stage (knocking off his own mic at one point), and journeyed with us on an enchanting psychotropic wanderlust. 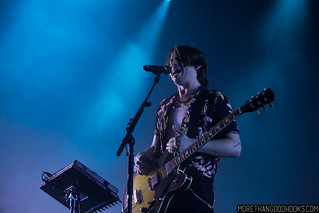 Although the setlist wasn’t always getting the people grooving, there were obvious standouts, all from their latest studio effort, including “Pay The Man”, “Doing It for the Money”, and “Loyal Like Sid and Nancy”, their nuanced hip-hop flourishes somehow melding with the overall sound. Perpetual gems of tunes like “Don’t Stop”, “Helena Beat”, and “Houdini” were also well-received by the audience, who came out in droves as a rabid force. 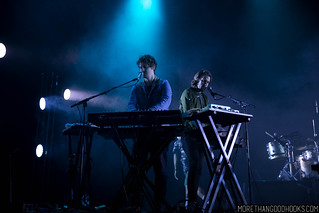 Their third studio album, Sacred Hearts Club, is heavily driven by rhythmic components and influenced by 60s psychedelia. And compared to the more guitar-centric sophomore release, Supermodel, the former comes out far superior, with its smooth transitions and uninterrupted flow. In this streaming and single-obsessed culture, it’s most definitely an invigorating piece of work, further bolstered by slick production. Whatever the genre, call it what you want, but Foster the People may have just leapt out of the confines of indie. 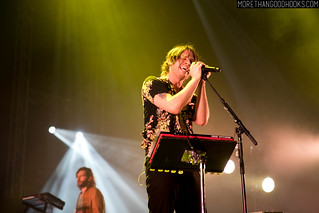 Before his quirky dance moves encapsulate you, Foster expertly transitions into a polished chorus, and with his flawless falsetto, especially when accompanied with his stoic demeanour, you can’t help but question if this man is real. Did he really deliver that vocal run semi-slouching, and with both hands in his pockets? I guess he did.

The band also spoiled us with their rendition of the Ramones’ “Blitzkrieg Bop”, which I thought exemplified the overarching concept of Foster the People. Many aspects of the LA outfit is just so punk rock; from Foster’s almost nonchalant swagger to their insistence on dipping their feet in multiple genres without a care in the world. And just like how “Blitzkrieg Bop” went on to almost single-handedly kick start an entire subculture, Foster the People has unintentionally garnered adoration from a cult-like following; their own Sacred Hearts Club, if you wish. 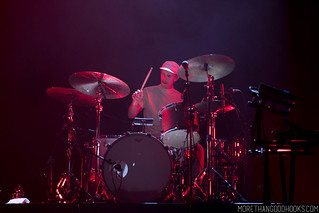 Their anthemic brand of West Coast indie-pop resonated throughout the medium-sized venue, uniting everyone in the audience, who were enamoured all the same. The aloof frontman also took some time to verbalise his frustrations with the political climate of America, choosing to believe that there is a light at the end of the tunnel.

“It doesn’t matter what you look like. It doesn’t matter what religion you believe in. It doesn’t matter if you’re male or female, gay or straight, black or brown. We’re human and that’s the thing that connects us all – it’s our hearts that connects us all. And love should be our mantra,” the impassioned singer-songwriter declared. “And I think it starts with us putting our hands out. Listening, before speaking. Listening to people that don’t agree with you, and trying to understand where they’re coming from. And building bridges, not building walls,” he continued emphatically.

Concluding the 90-minute marvel, they closed out the show with their breakout hit, “Pumped Up Kicks”, off their debut studio album Torches, which was released in 2011. The night was a perfect gift from them to us, made even more special since it was their last show for a while. 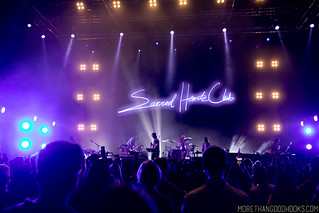 From the tangible synergy exhibited by the band, whose members could be seen switching instruments mid-song, to the electric atmosphere created by the crowd’s reaction to seeing their favourite songs come to life, to Mark Foster’s alluring charm; their performance clearly embodied a certain something – I don’t even know what. And seeing how they interacted with their fans post-show, I for one cannot wait to have them back.

Just say the word and I’ll part the sea.