I never thought that I would find myself looking forward to catching Harry Styles live in concert for the second time in less than a year. I found myself truly in awe of his performance back in November 2017, and what made me look forward more to the show this time around is learning that Warpaint will be opening for him for the show.

If my memory serves me well, I saw Warpaint back at St Jerome’s Laneway festival in 2011. It was a sombre setting and it rained all day long and I fell in love with the band at the very first listen. It gave me a sense of belonging and also empowerment to see a full girl band. We are so used to seeing men holding the limelight, bearing the ‘best guitarist’ so on and so forth. But to see a band full of women playing impeccable music, it feels like an achievement and inspirational.

I was rather curious to know whether the crowd would be hyped enough for Warpaint, given that Harry will be and is obviously the centre of attention, I just hope that the band is given the applause and the ovation they deserve for their musicality. And of course, to my surprise, as soon as they graced the stage, the crowd went wild. The screams of the fan girls resonated across the stage and it felt like they were welcoming Harry Styles himself. 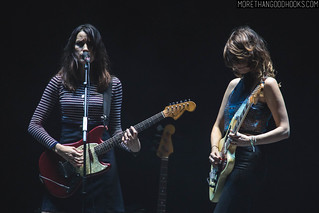 It was great seeing the girls on stage and Emily and Theresa’s vocals were impeccable and it reminded me back to when I first saw them. My favourite song off the setlist for the night was definitely “So Good”, and it was the only song I took out my phone for to record. I wanted to look back at the night by watching the videos. I hadn’t had so much thought about recording their set then because I was in awe. It brought back so much memories of yesteryears and how they have come thus far. I was a little upset they didn’t play “Drive” but they ended their set, which was rather short that night with the track “New Song”. Much rather strange than the normal takeaway but they have been known to break out of the norm. I was glad that the crowd was able to hype up the atmosphere when Warpaint was performing and I was also surprised that they enjoyed the girls’ set through and through. It struck me that Harry did good this time with his opening band. 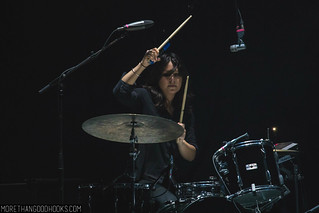 The wait for Harry begins as girls starting standing in their seats and chanting his name. The LCD thrown down from the ceiling depicted the countdown timer, though not direct at all, it was a rather eye-pleasing animation of Harry attempting to solve the rubix cube. It was a repetition and though it got me at the edge of my seat, I was in awe how these girls were so patient in waiting for the man of their dreams. I for one, just wanted the show to start already with the only reason of the fact that I hate to admit to myself that I missed seeing Harry live in concert. I never thought I’d say it but my day to day playlist on Spotify includes Whitechapel, Meshuggah, with Volumes and a mix of Harry Styles to just make it for the day. 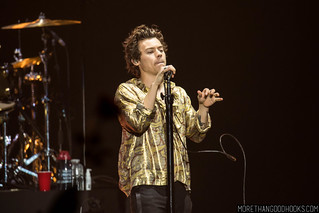 Greeting the crowd in his golden top, baring his chest with his tailored pants that fit him like a second skin, it was refreshing to see him out of his floral suit. Though they fit him like a glove, he must have placed the weather situation of our island into consideration while planning for his outfit to the show. He started swooning girls from left to right with “Only Angel”. I could’ve sworn then and there that my eardrums were begging for mercy having heard the jarring screams from all of the girls around me. I had a good look around and it was to my surprise, not all of them were teenage girls. I saw those as old as I am and those with their husbands, singing to every word of the song. I was surprised and my perception gave a 180 degrees turn that very moment. It was attested that music knows no age, nor preference. If it is good, it will be enjoyed by people of all shapes and sizes, and for this matter, age.

The night transitioned into the song that piqued my interest – “Ever Since New York”. I am confident that I have played the song over 200 times on Spotify and I was not only mouthing the lyrics, I was also making noises, impersonating the rhythm of the song and the musical instruments. Then, I thought, I have outdone myself. 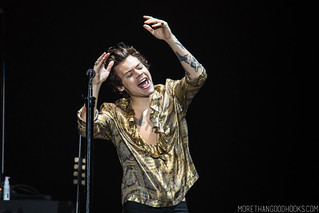 The night kept getting better when he performed “Two Ghosts”. The first ever listen to this song, back when I was trying to familiarise myself with his music when I saw him the first time back in November 2017, this was the track that I really admire. The lyrics were put together so well and the flow was a needless effort of simply being amazing. It was well thought and it felt as though this song has so much more behind the lyrics and the tune than just what the titled suggests. I didn’t manage to dig into it deeper but I thought I would give it a chance when I am ready to.

One thing about Harry is that, we all believe, he was a pivotal part of his now defunct band, One Direction and when he serenaded the crowd with “Stockholm Syndrome”, it felt as though it could be a solo song of his and he could excel the songs well on his own. The crowd grew louder than before and I thought they couldn’t go that far, but I was wrong. It was not a familiar song to me because I only know of the popular favourites from One Direction and this song felt all too new. But the song that got my eyes affixed on Harry the whole time, and I was so sure I wasn’t blinking, was when he did his own rendition of “Just A Little Bit Of Your Heart”, a song made popular by Ariana Grande which he co-wrote. To me, personally, the way he carried the song, he made it his own and it held more gravitas than ever. If felt pure and sincere. I was moved to tears for that short few minutes and I realised how vulnerable you can be, at any parts of your life. You can be attending a concert and when something just strikes the nerve unknowingly, you get caught in the moment, all bare. It was one of the moments that I thought I would never go through amongst the sea of girls. 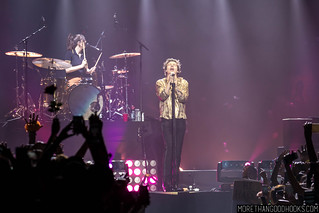 The night went on with the continuous screaming and having such a large venue, Harry was playing fair to everyone who attended the show, he took the next part of his performance onto a smaller stage, at the opposite side of the main stage, where he was only armed with his acoustic guitar as he serenaded us with “Sweet Creature”. The tone and setting of the performance was brought down a notch and the spotlight was all on him, he beckoned the crowd to put their phones up high and switch on the flashlight function. From where I was seated, the colours of the flashlights illuminate the different tone of colours, it looked magical and it went as wide as my eyes could capture. I was in awe and the mood with the accompaniment of the music and he switched up to another One Direction favourite titled “If I Could Fly”. The crowd instantaneously grew wild and it was a mixture of emotions and it was very surprising how one man’s music could change the mood.

He walked back to the main stage as he surprised us with a new song titled “Anna”. The lyrics were smart and witty, and I was really amused by the wordplay of the lyrics and the tune that comes with – is was effortlessly amazing. And I knew what was about to come because my favourite number was nearing and when I heard the familiar riffs, I could have sworn I gave out a sharp yelp and then disguising that sudden outburst with me singing ever so passionately to “Sign Of Times”. The back up vocals for this song was impeccable and I was amazed as how the coherence was still in tact after quite a while into the performance. It was also weird how I enjoyed Harry’s take of “The Chain” by Fleetwood Mac than the band themselves. I recalled having heard him perform this cover when he was here the last time, and that was the only song then that I knew all the words by heart and I couldn’t help but to love it more than the original, though I thought I ever would. 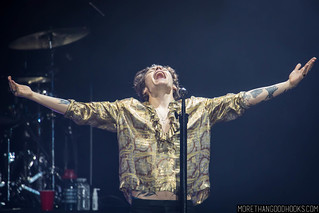 The encore was spectacular and it was the time when the crowd was tamed for a bit when Harry performed his rendition of that old favourite. And not to forget, Harry serenaded a lucky girl in the crowd for a coming birthday. She was given the spotlight at the camera panned in her direction and I was very sure my ears were not failing me then when I heard bickering from girls saying “I’m so jealous, oh my God, she’s so lucky!” That might be probably me about 16 years back into the past but I feel for the other girls who would do anything just for Harry to look at their direction during the show, let alone having him sing you happy birthday. That would not only make her night, it’d make her life. I wish for the day Phil Bozeman wishes me happy birthday as well but we all have far-fetched dreams.

The night ended off with a bang as “Kiwi” brought the attention back up and the full exhilaration and I thought this fan girls were tired by then. Again, I was wrong and I took that last chance for me to stand up and fully enjoy the show. I might have caught myself dancing given my two left feet but I enjoyed the night more than I think I would. 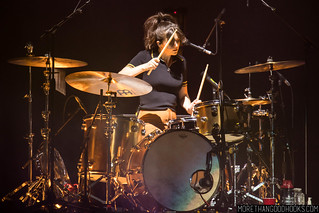 That night itself changed a lot of ‘what ifs’ and ‘not possible’ that I’ve had in me the whole time and I was not underestimating the performance but I was glad it broke boundaries. I am a proud metal head and I love to mosh but I can’t deny I love every bit of Harry Styles’ solo material and I would definitely brave through the screaming fans to see him live again. His vocals and stage presence is world class and he is at the top of his form every time. And my takeaway from the night has to be the impeccable performances and the women drummers that caught my attention for the night. I was blown away by the sheer talent of these amazing individuals. Like I mentioned, the night was about breaking boundaries and I am glad that both Stella Mozgawa from Warpaint and Sarah Jones from Harry’s band flew high that night with their weapon of choice. It was not only a night of performance but it was a night of remembrance of the better things in life that we should seek.

Thank you Lushington for making me feel like I could be young again.