It was a dream come true for those who have waited over 15 years with crossed fingers to witness the Adelaide-based metalcore band, I Killed The Prom Queen. 14th November 2015 was the day Malaysia saw and heard the metalcore heroes playing for hundreds of die-hard fans in KL Venue (Malaysia’s very own Chain Reaction) located in Bukit Bintang, Kuala Lumpur.

I Killed The Prom Queen (IKTPQ) is a five-piece metalcore act hailing from Adelaide, Australia comprising of Jamie Hope on vocals, Kevin Cameron on rhythm guitars, Shane O’Brien on drums, Benjamin Coyte on bass and of course the personality and founder of the band, Jona Weinhofen (ex-Bring Me The Horizon guitarist) on the lead guitars, vocals, and keyboards. The band is believed to be one of the first metalcore acts coming out of Australia. Their Kuala Lumpur show was their second last stop on their first ever six-date South East Asian Tour. 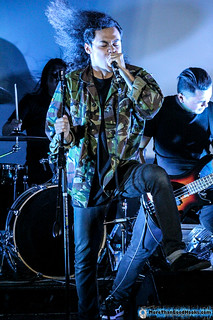 The gig was opened by several established local hardcore/metalcore bands such as As Our Throne, SOG (Sekumpulan Orang Gila) and Dead Eyes Glow. Massacre Conspiracy was scheduled to play among these respectable acts but due to unforeseen illness developed by one of their band members, they regretfully withdrew from the gig. 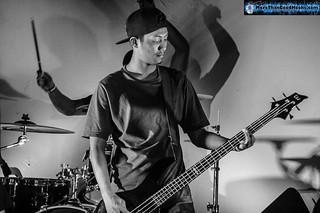 As Our Throne kicked off the show with their original set of four tunes and the band is fronted by Fazlur Redza, who also happened to be the emcee of the night. Soon after, SOG took over the stage and played some fan-favourites such as “Sumpah Pendeker”, and “Malaysian Invasion”. The crowd went nuts for the local heroes as brothers, Nazrin and Adek tear it up on stage. The last opening act was Dead Eyes Glow hailing from the East Coast of Terengganu. DEG hyped everyone up and started a huge mosh pit just to have the organisers announcing the gig will be continuing 2 hours later at 8:30pm which got everyone disappointed and frustrated as we were then warmed up by the opening acts and looking forward to seeing IKTPQ next. 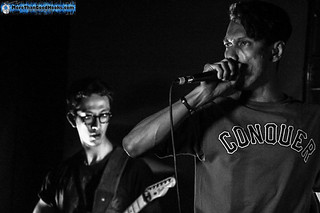 8:30pm came and the door only opened about 20 minutes after which left the crowd stranded on the staircase leading up to the venue. As the crowd slowly fills up the space again, the frustration on everyone’s faces was gone right after I Killed The Prom Queen took the stage. It didn’t even take seconds for the mosh pit to open up when the band kicked off their set with “Your Shirt Would Look Better With a Columbian Neck-tie”. “Moshers” were seen swinging their hands and “2-stepping” to the brutal guitar riffs and heavy bass lines. IKTPQ then immediately followed up with “Thirty One & Sevens” taken from their latest album, Beloved. The crowd sang along loud and clear to the popular chorus which brought a smile to Weinhofen’s face. The pit never stopped as vocalist Hope reignites the crowd continuously with his amazing job at being the frontman, encouraging the crowd to engage in all the “breakdowns” of their songs. 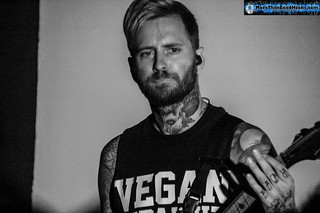 If you have been to enough gigs, you will soon realise microphone or sound issues in general are bound to happen when the band performs your favourite number and of course this happened to me when the band decided to play “Calvert Street” next. Despite having issues on his mic, Weinhofen did not fail to get the rabid fans to sing along to the catchy chorus. As soon as the song ended, Weinhofen being a frustrated figure called out the sound guy for not turning on the microphone. Even with the fear of not having Weinhofen’s microphone functioning, the band proceeded to play one of their most famous songs, “Sharks in Your Mouth” taken from thir second full length, “Music For The Recently Deceased”. The guitar riffs and blast beats kicked in and the crowd were seen stage diving, crowd surfing, and moshing. 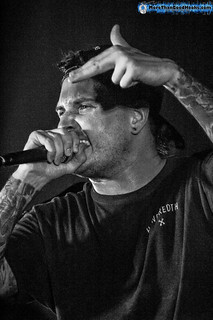 The band then continued playing a few more songs such as “To The Wolves”, only to have the organiser come up to Hope to inform them they have time for only one more song only and nothing more. After a brief discussion amongst the band members and chants of “Say Goodbye” from the crowd, IKTPQ decided to end their short set with the fan-favourite, “Say Goodbye”. I first heard this song about nine years back when it was just released and here they are now, performing it live in front of my eyes. The crowd took this last opportunity to party as hard as they can by crowd surfing and stage diving non-stop throughout the song while some remained on the floor and sang along to Weinhofen. As soon as the set ended, the band stormed off the stage in anger and frustration but that did not stop the crowd from demanding for an encore which got Hope to remain on stage and addressed the crowd that there was nothing they could do and proceeded to tell everyone to stick around and hang out with them backstage. The look on Hope’s face showed a mixture gratitude and sadness when everyone demanded for one more song and they could not deliver. 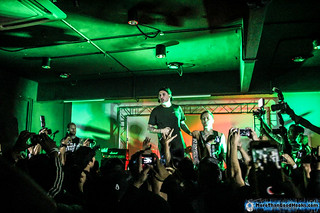 Questions flickered in the attendees’ minds as to why and what had happened which forced them to cut their set short. Around 1am, our curiosity was pleasured when Weinhofen announced via Twitter that they had been detained by the Malaysian Immigrations Department for performing without a valid permit and it was in no way their fault as they were promised by the promoters that it was an exception for them to perform here in Malaysia. Fortunately, as Weinhofen updated, they were given food and water and were in good shape but they could still be detained for 4 to 14 days in Malaysia which caused them to miss out on headlining the Rock in Solo Festival in Indonesia the next day. As of Monday (17th November 2015), Weinhofen announced again via Twitter that they have been released with no actions taken against them along with an apology from the Director General of the Malaysian Immigrations Department. However, Weinhofen also mentioned that after this incident they might never come back to Malaysia again, thanks to this incident.

An article from Australia was tweeted by Weinhofen which covered their story of their situation after he had released the tweets. It had seemed that the band members of IKTPQ were taken to a local detention facility where they were treated as though they were prisoners. According to Weinhofen, they were taken to a cell which consists of 30 other men and they were instructed to remove their underwear and shoes. As vegans, all they could eat were a few bowls of rice. The condition of the cell was horrid and they were very disappointed with how the tour had ended.

Overall, the band definitely gave all of us a top-notch performance despite the speakers being exceptionally louder than usual which got my ears ringing for the next two days. However, the entire experience was not pleasant and the turnout was not what you would expect for such an established band and I have nothing but sympathy for the band for the streak of unfortunate events hitting them. Hopefully they will return in the future – minus the mishaps.