Upon learning the news about them coming to Singapore, there was a sudden wave of nostalgia that hit me right in the feels. Back when I was a wee teenager and was pretty new to the various genres of metal and rock music, I Killed The Prom Queen was the first metalcore band that I chanced upon during the very celebrated MySpace days where many of us stumble upon incredible bands that are really big in the scene today. Here I thought that they were on a hiatus after their last album ‘Beloved’ which was released last year. I was hoping that they would tour right after the album release but even if it took them a year to perform here, it was better than anything that I could ever imagine. No doubt it was sudden, but I’ve never looked forward to a gig more than I did with this one. 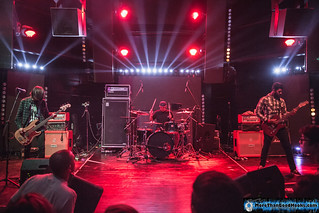 Joining the main band were three local groups; I, Devotion, Weight Of The World A.D, and hrvst that were on the bill as opening acts. All three are well celebrated in the local Singapore music scene and each band also carries a different energy. The band which really stood out to me was hrvst. A punchy yet sludgy edge to their songs with impeccable vocals and melody that binds the band as a whole. I found myself bobbing my head a little too much for their set as I was getting myself prepared for neck sprains while headbanging right in front of the stage. The crowd was not as massive as I hope it would be but that only means that we don’t need to fight for the spot with the crowd at the ‘barricade’. 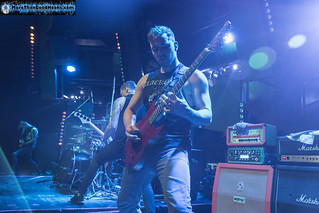 It felt a little out of the usual with the not so massive turnout but we know that they wouldn’t give us any lesser than a great show. The night started out with “Your Shirt Would Look Better With A Columbian Neck-Tie”, a true classic. It was a track off their Music for the Recently Deceased album released in 2006. I can confidently say, to the best of my memory, if it serves me well, was the first track I listened to and it took me a while to warm up to the song arrangements and the screams but it didn’t take me long to fall in love with the album in its entirety. It brought me back to when I was perusing through their MySpace page and fully utilising their ‘Music’ widget when I was streaming as many songs as I could listen to and this was the first one that played. It was almost love at the first listen and I couldn’t pry myself of the computer screen or my earphones. And watching them performing this song live brought me onto another level of satisfaction and I knew then, I never regretted on how my taste in music evolved throughout the years. 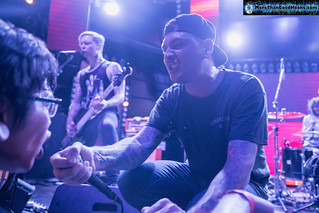 Ever since I have the date 12th November 2015 noted in my planner for the gig, I have had “Thirty One & Sevens” on repeat on Spotify. The lyrics to the song speak volumes of the years of dwelling over certain issues and was apt for that moment in time. It didn’t take long for me to click to the song that they were performing on stage as I took off my hair band and started headbanging. I sang along to the chorus during Jona’s part of the song and I found Jamie kneeling in front of me, singing along to the chorus, word for word. No doubt I was taken aback by his sudden appearance but it was the first and am hoping, definitely not the last, to come as close to a musician who looks at you right in the eye as he sang along to the lyrics of the song word for word and you following his each and every mouth movement as you utter the exact same lyrics. It was a feeling that was almost sentient and you clicked with the band on a whole new level as you just lose yourself to the music. 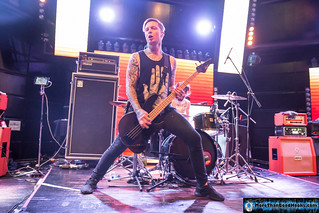 The day of the gig fell on the same day as a good friend’s birthday and he was the man behind the beautifully designed poster for the gig in Singapore and what better way to celebrate it than requesting the band for a shoutout to wish him a happy birthday in which Jamie did right before playing “Calvert Street”. 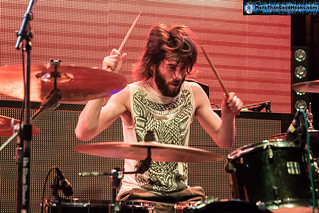 They’re also known for their famous cover of “(sic)” by Slipknot and when the familiar riffs across across the crowd, they exchanged glances and unitedly screamed “Here comes the pain!” One fan event took it to stage as he climbed up and managed capture a selfie with the band while they’re performing the track. I wouldn’t compare it to the original version of the song but this cover was as amazing as it could get. 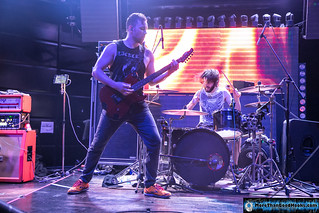 As soon as Kevin played those chords on his guitar, I exclaimed to myself “OH MY GOD THIS WAS MY RINGTONE 4 YEARS AGO!” and I was continuously headbanging. I could feel my neck almost giving way but that didn’t stop me and my hair was puffing up and all I cared about was the music and not giving a care of how I might look. I remembered Jona coming to our side and was working his fingers on the guitar. I was mesmerised and just swooned over by such tenacity on the instrument. 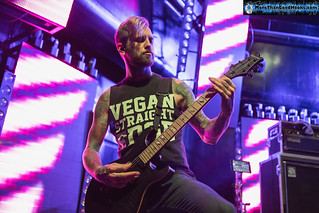 The night was nothing short of amazing and we managed to take some photos with the band and talked to them, one of which was pretty awkward and he spent almost the whole time chuckling. We went up to Kevin and asked him for a photo and my friend said “We met in the ladies washroom” and Kevin replied “I didn’t know it was the ladies”. It all happened too fast when we visited the washroom, thinking that we were alone but was greatly surprised to see Kevin coming out from the cubicle. We exchanged awkward glances and hence, vowed to never forget the day. It was definitely one to remember for the road and a strange yet laughable takeaway from a show.

I felt like we owe the band an apology for the less than favourable turnout but we were beyond grateful for the impeccable performance that probably comes first on the list for me as the best metalcore gig ever attended for the year, I can safely say that. It was surreal to relive the almost yesteryears, the wave of nostalgia hits you hard, in a good way, singing songs that played a part in shaping me today. I was surprised to find myself recounting the various phases in my life through the course of nine years where this band played a part. Though they might not be my go-to band to listen on a regular basis, but I Killed The Prom Queen always brings me home to where the love for this specific genre bloomed. Thank you Sled Production and Recontstrux Booking for the extraordinary night of nostalgia. Indeed, this band is truly Beloved.