He has finally cut his hobo hair! Eureka! Okay – back to the point, I have mixed views over this. Jason Mraz isn’t the perfect singer who has high vocals if you look at his technique, but they are always interesting and you always know that it’s him when you hear his voice. The same technicality comparison I can make with Ed Sheeran, but I prefer not to. He just doesn’t sound like anybody else out there either and for me that’s very important and genuine. Since his debutant days, Jason Mraz has been on a mission to keep the spirit of wisdom, love, and motivational shows alive. He seems to be doing just that at prestigious shows and that of his own, which what Singapore’s Star Theatre was all about. We were geared up for his three-hour long concert, and this was only the first day of a two-day acoustic event. 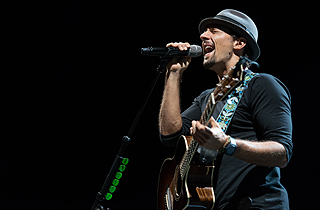 The show was opened by the cheerful all-female musicians named Raining Jane, who earned recognition by Jason Mraz himself, after witnessing their performance at a festival at Redlands University where both acts were on the same bill. Somehow, that encounter brought both Jason and Raining Jane together in 2006, hence their recent two albums were produced with a different vibe. Raining Jane’s lilting voices and coy demeanor were alluring as they played their original songs like “From Me To You” and “Opposite Of Blue.” I especially liked their cover of Pat Benatar’s “Love Is A Battlefield,” which was significantly different from their other upbeat songs. However, instead of smoothly sailing between different songs, they appeared to leap to the main event. While their charming voice was pleasing, the lack of musical transition was not.

After a quick 10-minute performance, Raining Jane stayed on stage to introduce Jason Mraz with tepid applause. When Jason appeared, I was stunned as the entire venue reverberated with cheers and enthusiasm. The stage looked ethereal with twinkling lights all over the background and amid psychedelic colors, I held my breath as I expected to be blown away by him. Instead, he crushed all hopeful expectations that I had. Well, nearly.

While his songs like “Dynamo Of Volition” and “Life Is Wonderful” were enjoyable, his most famous single, “Lucky”, wasn’t. He sounded unpardonably different from the recorded version, probably because the tempo was reduced greatly and made his voice lack versatility. His intermittent accounts about how every other song revolved around irrevocably falling in love with a best friend came off as mildly annoying rather than inspiring.

In Mraz’s lyrical content, this time it moved more toward the pre-pubescent-sounding and heartbroken cult of females lead by Taylor Swift. His show seemed to have been geared more towards hopeless romantics and heartbroken teenage girls than mature concert-goers. I would go as far as to say that Mraz’s cover of “Sweet Dreams” and that Antarctica video right before the intermission was one of the few moments that were really pleasing about the show. It was truly epic. 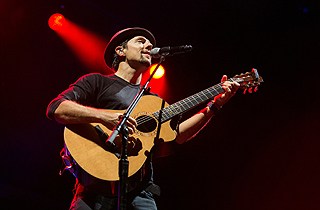 Jason Mraz and his band went on to play several other songs like “Long Drive” and “Hello You Beautiful Thing” from his new album, YES! At one point, Mraz employed a clever ruse of uniting two of his comrades to dance onstage, which turned out to be slightly more amusing because he ended up dancing on his own. The iridescent stage that was pleasing to the eyes turned out to be one of the show’s highlights. I believe that there are musicians who sound nice only in recording and then there are musicians who sound agreeable live. Mraz is certainly the latter. Hence, I would certainly prefer if he focused more on touring and showcasing his musical talent and vocal maturity.

“Unfold,” one of his older offerings, was a wistful acoustic number about a relationship that has run its course. Another, “Quiet,” was a lovely, folk-inspired song, featuring an accordion and a message of encouragement and support that could be as easily applied to a friend as to a lover. “Make It Mine” is an anthem for girls and boys everywhere who can’t wait to grow up, get out of teenage life and see the world. There’s no doubt his new album will be a slam dunk for Jason Mraz. The songs are fresh and pop-perfect, with tinges of other genres – like country, the aforementioned folk and even a little rock – giving them interesting and unexpected twists. However, the performances that got the biggest and most heartfelt reactions on Monday night were his older hits. 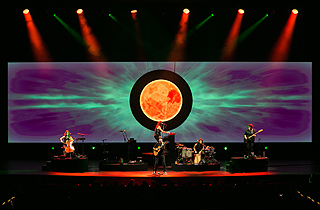 “I miss that guy,” a grinning Mraz said afterward. “Charlie’s my best friend and we’ve been to all over the world together until he was diagnosed with cancer. And he said he won’t worry his life away because of it. And that gave all of us hope and to make every second count in life.” “Remedy” was somehow another happy, fun song seemingly made for his best friend who has cancer and it was his first big hit, which was performed to a backdrop of photos submitted from fans of their happiest moment. “3 Things,” one of the songs taken off his new album, got an enthusiastic sing-along on the chorus, and “Back To The Earth” ended things on a summery and vibrant note, with the crowd up out of their seats and humming in the aisles and in front of the stage. 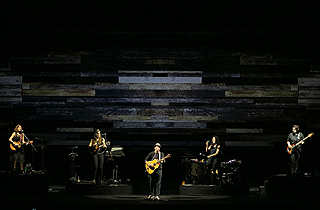 The evening’s most poignant performance was “Mr. Curiosity,” the lead single from Mr. A-Z, with its message of self-acceptance and self-esteem underscored by its immensely vibrant piano that features Mraz mouthing the words to the song, and I just have to say that the opera part moved me into tears. The empowering ballad created quite the positive stir when it was released nine years ago. “It’s never too late to accept who you are,” Mraz told the crowd to screams of affirmation and applause. He is of course every bit the coffee house performer, from his laid back, happy stage presence to his trademark headgear that sticks like glue. By now he and his smooth, melodic voice treated concert-goers at the Star Theatre to a full and eclectic mix of his best-known hits and some new songs in a set that lasted just over 90 minutes as it reaches the intermission.

I felt Mraz was giving us some important vocal tips and tricks, too. It was a wonderful moment in a concert full of simple pop songs about love, relationships and emotions, especially coming from someone in the music industry where such sentiments are often expressed.

But while Mraz is sometimes known for songs about heartbreak, the overall sensibility of his performance was one of sheer joy. Even as the crowd sang along to numbers about romantic loss, there was a feeling of elation. It is, perhaps, because he has learned that it’s okay to sing about happiness, that not all songs have to ache for something. The song “Love Someone,” is off YES! and was written with Raining Jane, who apparently urged Jason Mraz to embrace his inner glee. In those moments, it’s easy to understand why fans are attracted to Jason Mraz and to his music. He preaches a sort of hope in his stage banter, encouraging those around him to follow their own dreams and say yes and smile; to embrace their own happiness the way he has with his. It’s a good lesson for musicians to remember – that not all songs have to be sad to connect with people.

All these yeses have led Mraz here, collecting buoyant, amiable pop songs often inspired by the singer’s spiritual enlightenment in all things. The marriage of Mraz’s soaring voice and his intimate, relatable lyricism has created a certain type of pop song, too, one that is more interested in an emotional connection than overwrought stage production or sexed-up outfits. He isn’t disaffected or distant, but instead seems to be having as much fun as the fans. It was clear, on Monday night, that Jason Mraz would choose to be here, experiencing this, even if he wasn’t the performer. He took full advantage of the crowd’s commitment to the music, orchestrating a sing-along round during “93 Million Miles” and setting the fans to sway in union to “Plane.” He received equal admiration for the boisterous pop songs as he did for the emotive ballads, particularly “I’m Yours,” which appeared on soundtracks of countless movies. He switched between the piano, guitar and microphone throughout, connecting the segments of the performance with several different vibes he poured onto the audience. 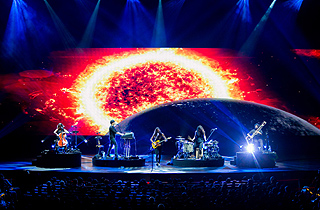 A big green and blue planet called Earth that’s being eclipsed by the Sun was projected at the back of the stage – an apt symbol for a singer who concentrates on just one subject: love, and its mysterious ways to conjure up a perfect one. Half an hour after the intermission, I realize Jason Mraz performing back to back shows for the first time in Singapore is like sitting in a teenager’s bedroom as he unburdens himself; song after mournful song rolls out, along with stories about the unforgivable crushes that inspired them. On the plus side, the 37-year-old American comes with a plaintive, supple singing voice that makes listening a pleasure; on the other hand, songs like “Shine” and “A World Without You” fell short. It feels wrong to be too hard on him though, because if you believe the backstory, this show is supposed to be plainly acoustic, so it’s a different showcase that’s not easily mesmerized by audience of all ages. 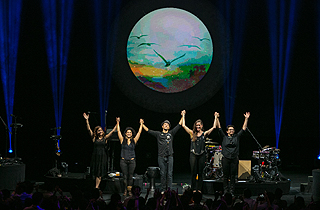 Conversely, “I Won’t Give Up” mashed up with “It’s Hard to Say Goodbye” was performed whilst crowding together with the ladies on the center of stage, and signaled a curtain call as Jason Mraz bade farewell to the crowd with a great bow. Tonight however, he’s a composite of Alanis Morissette and Jamie Cullum with no angst, tempered by a spoonful of choruses. No matter how self-absorbed the song – and he throws himself into each, smacking a guitar or crashing out the chords on piano – he finishes every one by handing out a homemade quote and made us believe to take it easy and live life. The music, though, is less rad, with earnest balladry being the order of the day. Several tunes managed to transcend into our hearts, but I just felt something was missing.

Am I the only one who misses Jason’s more upbeat songs? Well, I guess he’s no more Mr. Curiosity, more of Mr. Simplicity now.