Dancing in the Rain

Indonesia is facing the peak of its rainy season and heavy rain was predicted to pour throughout the day on Friday (Jan 17). A dry night seemed like too much to ask, and Love Garage festivalgoers were well aware of that. Many brought along their raincoats while Twitter users confirmed the availability of disposable raincoats by Ismaya Group (who had hundreds of them ready to be distributed).

Such preparation came with experience, as 2014 marks the fourth Love Garage instalment. Previous editions have seen indie heroes Two Doors Cinema Club, Yeah Yeah Yeahs, and Ra Ra Riot gracing Indonesian grounds. Held at the parking area of eX Plaza Indonesia, this year’s “Love Will Save the Universe” theme saw a pack of alien-costumed folks roaming around the venue, with space-themed backdrops thrown in between. Will good music save the world from the aliens? Perhaps, perhaps, perhaps.

For the first half of the night, during the sets of local acts Protocol Afro and Jirapah, no downpour was in sight. The latter delivered a solid indie rock set, juxtaposed against their signature melodic chords that provided a feel-good ‘90s feel. Jirapah is currently cooking up their debut album following their 2009 formation in Brooklyn. Founding band members Ken Jeanie (also one of the driving forces behind online lifestyle publication Whiteboard Journal) and Mar Galo recruited Yudhis Tira (guitar), Januar Kristianto (drums) and Nico Gozali (bass) after their homecoming. Up next was a back-to-back British DJ set by Zero 7 and Fenech Soler that kick-started the dancing in the rain session that would last through the night. 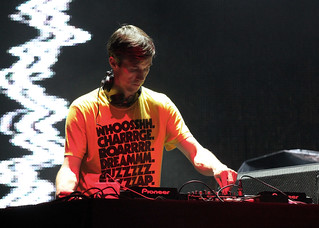 The venue had already been filled by raincoat-clad fans screaming “Phoenix!’ ‘Phoenix!” by the time the stage light turned red and catchy keyboard tunes audible. Minutes before, my gig partner and I bet on the opening song. Thomas (vocal), Deck (bassist), Christian (guitar) and Laurent (guitar) opened the show with “Entertainment”. Damn, I hate losing bets.

Ego aside, the set started on a high and continued going uphill from there with “Lasso”, “Lisztomania” (from Grammy-winning album ‘Wolfgang Amadeus Phoenix’), “Long Distance Call” and “Too Young/Girlfriend”. Massive crowd choir was heard throughout, lending a fantastic festival vibe made up of jumps, sing-along and excited screams. The night’s sound system quality deserved a mention for its ability to rise above the weather condition. 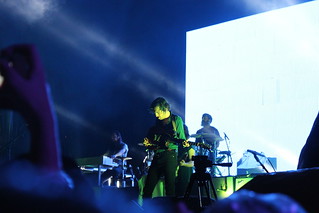 Phoenix’s ‘Love Garage’ appearance marked the French outfit’s second coming to Indonesia after their 2009 gig. Since then, they have bagged a Grammy and headlined both Loolapalooza and Coachella, while frontman Thomas Mars married uber-cool long-time girlfriend Sofia Coppola.

“Thanks so much for staying with us despite the rain. We truly appreciate it!” Thomas greeted the cheering crowd. The hits streak continued with a medley of “Trying to be Cool / Drakkar Noir / Chloroform”. The upbeat tunes and rock riffs smoothly shifted into a noir mood afterwards, alongside the stage backdrop change that displayed Parisian streets seen through a car’s window. Thus started a surreal 10 minutes featuring “Love Like a Sunset Part I / Bankrupt! / Love Like a Sunset Part II”. With minimum amount of words, the long medley truly showcased the band’s ability in creating meticulous and multi-layered sounds. High-pitched guitar synths blend with ambience sound, topped off with rather awkward beats and choppy vocals. To my ears, their music is a mish-mash of random things that somehow unite into a solid, ear-catching music. 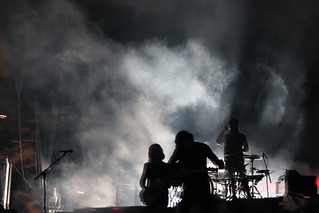 Since its formation in 1999 and more so since their American success post-Wolfgang Amadeus Phoenix, the band is known for their approachable and rather geeky cute image. Dubbed “Four Parisian Boys with Brotherly Love”, I was anticipating for some ‘awww’-worthy moments that night. The moment came during “Armistice”, when Thomas climbed the crowd barrier and sang in the rain, surrounded by fans that went nuts over the little gesture. Not many frontmen would do that for their fans (what with Jakarta’s highly acidic rain), really.

Thomas stayed there until their last song “1901”, to then signed out for the band. Demands for encore were deafening, but unfortunately the rain made it impossible to do so. Ismaya Live’s Richard Sandy confirmed that they had to stop the set for safety reasons. On a post-concert Instagram post, the organiser posted a message from Phoenix, who apologised for the lack of encore but called Love Garage ‘an epic show’ nonetheless. Indeed it was.

‘Till next time, Phoenix! You still owe us “If I Ever Feel Better” and “Rome”.