I didn’t exactly grow up listening to metalcore in my early teenage years and I have to admit, I only took the liking to the genre in early 2010 when I was first introduced to August Burns Red. I slowly expanded my metalcore playlist through the help of my close friends and stumbled upon an album titled “Monument”. It took me some time to warm up to their style of music but my interest towards the genre grew exponentially within a matter of days. Miss May I was one of the very few bands that made it into my metalcore playlist when I was very adamant I was an indie/alternative individual at heart. The subgenre of metal managed to reach through the gaps of my very discerning taste in music during my younger days and I am glad I have had the chance to get deep into metalcore, up to this day.

After being delivered upsetting news about them cancelling their show here in Singapore twice, we were greeted with the news of them gracing our shores and I told to myself and also my friends “come on guys, third time is a charm.” As soon as the day arrived, the group of us met early and we were worried that there might be some last minute glitch and it might be the third disappointment in a row but all our qualms were quashed as we heard the favourite numbers being played during what we believe was them soundchecking. It was a relief and the growing excitement that was incited in us as we told ourselves, finally, tonight will be the night we’d see them performing live after all these years of waiting.

Patriots, hailing all the way from Malaysia, was the opening band for the night. Having played the genre akin or similar to Miss May I, the band managed to get the crowd hyped for the main act of the night. A particular song that caught my attention was the song titled “Liberate” which was a song off their Stand Off EP which featured the former vocalist of Crown The Empire, David Escamilla. The song has crazy amazing breakdowns and I found myself tapping my feet to the beat, almost breaking into a moshpit frenzy but I thought I’d save my energy for the night.

Greeting the stage in his signature style, Levi greeted the crowd as I could feel every single one of us across the floor screaming and chanting “Miss May I”. I even heard echoing through the crowd “they’re finally here!” and I smiled as I nodded in agreement with the eager fans out there who have been waiting for years to finally catch this band live before their very own eyes. 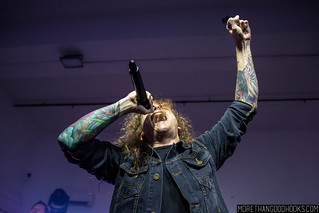 The night started with their recently released single off their latest album, ‘Shadows Inside’ – the song “Lost In Grey”. I only listened to the song two days prior to the show and I was already in the kicks of remembering the lyrics, word for word. The crowd was compressed to the front as we raised our hands, singing along to Levi’s screams and in hopes of helping Ryan to sing the lines proper. It was a start to a long night, I told myself and I was not about to let the energy plummet anytime soon.

I have been following their tour setlist as suggested on their Spotify page and the second song of the night was one of my favourite songs off the album titled “Deathless” – the title track. It was a fitting song for that particular night, that past few weeks I went through was just the hardest of all year round and that song got me through it all, tying the bit of loose ends whenever I feel like I’m giving up. As Levi screamed the first line of the song, I held my fist up in the air as I sang along to the screams, each and every word to the song and I thumped my chest to feel the riffs and the lyrics. I closed my eyes as I moved and rubbed shoulders with the crowd. I didn’t care about the kicks that were thrown towards my back or the pushes, let alone the sweat trickling down my neighbour’s arms. That moment, everything and all that I went through just to witness that song being performed that night, it was worth it, every last single bit of it and as I sang Ryan’s lines, I opened my eyes and looked at him as I sang the very lines that I repeat each day for the past few weeks as my morning mantra and it felt surreal. In that moment, it felt as though my surroundings were quiet and it was just Ryan and me singing; it was a total euphoric moment. 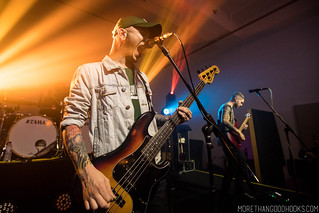 I had to snap myself back intro reality, in a hard way as I felt a kicked swung to the direction of my lower spine and as I turned back, there was a circle pit forming and I was involuntarily pulled in which ended up in me sliding across the floor as the riffs to the “Masses of A Dying Breed” materialises across the speakers and the crowd grew rowdier by the second. It was a track of my favourite album, ‘Monuments’, and I remembered being pushed to the very front. I took off my hair tye and started headbanging. 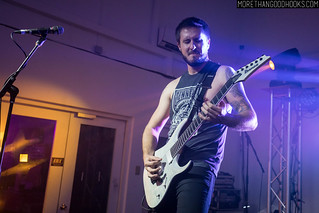 The whole band was what I had always imagined but they have surpassed each and every one of my expectations. Levi’s screams sounded exactly to that off the albums, it was as good as the tracks recorded and I could say the same about Ryan’s clean vocals as well. They compliment each other so very well, even during live performances and I told to myself, it was well worth the wait after being disappointed twice.

“HEY MISTER, WHERE HAVE YOU BEEN?” rang across the crowd as Levi screamed into the vocals that followed after the familiar sounding riffs that got the crowd wild and moshing at every chance they could get. We tried our luck to get to the front and sang along with Levi and Ryan. The night only started when they performed “Hey Mister”, a track off their ‘At Heart’ album and one of their highly acclaimed records in the genre. This song was an anthem to many of us and as I can safely conclude, a good chunk of the audience seems to agree as well. Levi paid attention to each and everyone of the crowd and was acknowledging our sheer enthusiasm to sing along to the songs we love and enjoy most. 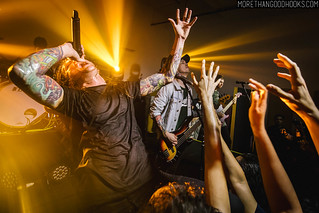 A general crowd favourite, or I could say so for my friends and myself is a song titled “I.H.E” off their ‘Deathless’ album. I remember having this song on repeat when this album was released and it resonated through me, and it was just fitting for almost every occasion. Jerod’s drumming for that particular song was impeccable as both Josh and B.J. cued into the song with their snazzy delicious riffs as Levi let out a long scream which both my friend and me mimicked. It was the thing that we both shared the interest of and we were raising our eyebrows with our mouths ajar as we both agreed; it sounded exactly like in the song, having heard the track copious amount of times, I think we can confidently attest to that. Ryan’s vocals for that song created a heart thumping adrenaline rush as you could hear the crowd singing their hearts out. It was a memorable performance, especially that particular song that got us through bleak and worrisome days.

The next song was a song titled “My Sorrow”, taking a notch down from their usual hard hitting snares and blasting riffs, Ryan took the spotlight as the crowd was seen taking out their phone flashlights and waving their arms in the air and we looked up and swayed in tandem with the toned down melody as we sang:

It was an emotional song and we could see it in Ryan’s eyes; he sang it with all his heart and his might and it resonated through the crowd. We felt the connection though the massive amount of people, rubbing shoulders and drenched in sweat, that song was sang in unison. 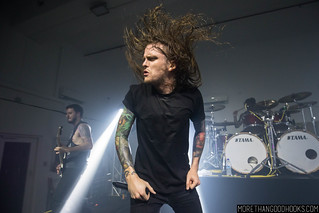 The night wouldn’t be complete if they didn’t end it off with the song “Shadows Inside”, the time for us to mosh for one last time before curtain call for the night. We moshed and sang our hearts out as we feel drenched in our own sweat, top to toe. We thanked the band as they made the exit from the stage and we thought of trying our luck to meet them outside the venue just to snap a photo with the band. Luck must be on our side that night when we were greeted with Levi who was surprised that we stayed behind and he even added “If I knew you guys were outside, I would’ve come out earlier” and we chatted as he took an Instagram story of us, of which the same was uploaded on his Twitter page.

It felt surreal and that night, despite feeling like my back was about to break into half and having feeling the pain all over my body, I would relive the night over and over again. Thank you Rockiss for finally making our dreams on catching Miss May I live come true.