The highly acclaimed annual Singapore Jazz Festival graced the shores of the Singapore stage at Marina Bay Sands once again with their yearly impeccable lineup of talented jazz singers from all over the world, young and veterans. The event puts together a massive show each year, garnering fans from the edges of Southeast Asia gathering to witness their musical heroes right before their eyes.

This year’s lineup gave me the goosebumps when I learned of the names of the artistes that were included in the bill. Amongst the first ones announced were Lalah Hathaway, and Jamie Cullum. But this one particular artiste, upon learning her slot on the festival itself, left my mouth hanging. Never would I have thought she’ll make her way down to our little red dot, much less seeing her perform in this yearly festival. I grew up listening to her songs before I indulge myself in other genres of music but this was one that I couldn’t keep myself contained. I sent a text to my friend in full capital letters and said ‘DUDE, LAURYN HILL, SINGJAZZ 2018’ and the reply was almost immediate with ‘ARE YOU PLAYING WITH ME?’ and the festival banner proved it to be true. I was hell bent on going for the event, one way or another.

Day 2 was the day I was looking forward to with Lalah and Jamie on the bill and what comes after is going to be the performance of my dreams. I still could not believe that I was finally going to watch Lauryn Hill perform that night. It was surreal to me, the very least. 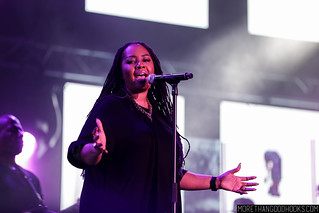 I made it just in time to catch Lalah Hathaway blow the fans away with her spellbinding vocal gymnastics. I learned about her through a music video from Snarky Puppy in the song titled “Something”, which blew my mind. Her vocal range was insane and I couldn’t get enough of her or how she went about exercising those majestic chords – it was beyond me. Through the course of that night, I finally learned, and I felt ignorant for the last bit of it when a familiar tune came ringing across the stage. The tune to the song “You Were Meant For Me” hugged my ears close and brought me back to yesteryears, a song originally sung by Donny Hathaway. The sudden realisation of both of them sharing the same surname got me distracted for that short bit on my phone just to find out the legend was her father. As the saying goes “the apple doesn’t fall too far from the tree”, Lalah did the song justice and sung it with her whole heart and soul. It felt surreal and it was beautiful. I could feel tears welling up in my eyes, tears of pure joy. The old souls of jazz maestros came filling in the crowd that night. It felt magical to say the least. 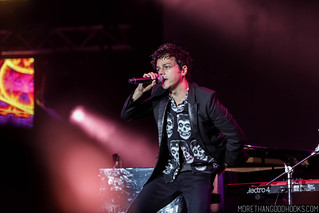 Jamie Cullum, from what I learned and if my memory serves me well, he was self-taught on the piano and he has since have a lot of awards and nominations under his belt. His cover of “Everlasting Love” off his Twentysomething album shone him in the limelight, with many music producers being awed by his talent, he has proven his songs to be versatile and anthemic for popular Hollywood movies all around, mostly romance. Back then, I had yet to learn to appreciate his music. Only after seeing him live that night, I found myself looking him up on YouTube and making sure I have his songs downloaded in my iPod. I was quite disappointed that he did not play “Everlasting Love” but the rendition of “What A Difference A Day Made”, originally sang by Maria Grever. Word after word, it was as though my mind was playing the video captured in my head, and mapping it live on stage. It was magical. What caught me by a pleasant surprise were his takes on Daft Punk’s “Get Lucky” and Rihanna’s “Don’t Stop The Music”. I never thought the musical arrangements to heavy electronic sounds could be changed and transposed to a jazz arrangement and it was not overdone but all in his stride. I was sure that I was only fixated on one artiste for the night but I could not miss out on the other talented people that were gracing the weekend with massive ovations from the crowd.

I knew then as soon as his set finished, I was inching closer to the time when I get to finally see the woman of my dreams. I am in no way emotionally attracted to her but I can’t deny that I catch myself singing to her songs more times than I am actually focusing on one thing altogether. Lauryn Hill shaped my perception of rhythm and blues and till this day, I have yet to find someone who could fit in her shoes.

After her long hiatus from the music scene, Ms. Lauryn Hill came back with a bang, performing in great venues all over America and has since won back the hearts of many who found their love for the diva resurfacing as they watched her live. I knew that one day I would be able to witness her in all her glory and the day came. Albeit the clock was past my bedtime, I was willing to push down two cans of Redbull just to stay awake because it was all too worth it. 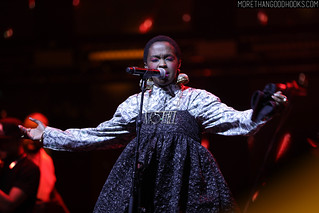 “Everything Is Everything” made the long time awaited debut for the night as fans echoed across the hall, singing to each and every word to the song. This song was a song of my early teenage years and it spoke to me in a whole lot of ways and I finally got to witness it live – it was more than just a mere ‘dream that came true’. Clad in her top and blossoming skirt that appears to be her outfit of choice on many occasion, Ms. Hill brought herself out like a superstar without even trying. Her presence that night was beyond just for the sake of her performance; it was omniscient.

The night went on as she graced the crowd with the popular numbers from Fugees, of which a personal favourite of mine has always got to be “Ready Or Not”. I have had the song playing in my head the whole night and it was well on repeat on Spotify to me and when I heard it live, the wondrous notes belted by the star of the show, it was sensational. I couldn’t bring myself to mouth to the words of the lyrics well as I was truly awestruck with the magnificent performance. My jaw was ajar the whole time and I was not even bothered to snap myself back to reality. 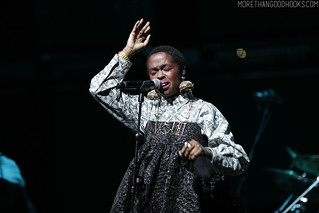 Bob Marley has been a huge part of me while I was growing up as my dad loved the man and his music to bits and upon listening to Ms. Hill’s rendition of “Turn Your Lights Down Low”, I was sold and I remember, I was only about 15 then. I have since listened to her version more than Marley’s. And that night, as soon as the familiar tune came on, I looked around me and saw everyone nodding and dancing to the groove and rhythm and as soon as she hits the notes, I felt tears streaming down my face and I mouthed the lyrics. It was so surreal, and the crowd agreed with me. I turned to my sides and see people receiving the energy exuded by the Queen that night was extraordinary. What more when she ended the night with a bang, with “Doo Wop (That Thing)”, the song that became the track of the new generation for teens alike. A message hid within a song, a lesson learned within an art. That’s how music is supposed to be, comes with a powerful empowering message for the masses instead of just regurgitating rhymes for the sake of the sale. Ms. Lauryn Hill is my diva and my queen. I put her up on the pedestal not only for her strengths as a musician, but the powerful messages sent to the masses way before any other artiste became relevant.

Thank you for the amazing night, Sing Jazz. Definitely a night that goes in the history of books.