Jazz – widely known as music only appreciated by the older folk by the youths of today is usually not given a second chance to hold a place in their iPods, as the genre is somewhat deemed to be very boring and not pop-ish enough to keep up with the trends. But who ever knew that the genre took a turn with the strong tinge of modern fusion to it? A band, hailing all the way from Brooklyn, New York, gave us a feel of what modern day fusion can somewhat be hip and cool, and at the same time, melt our faces. 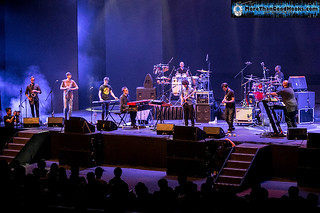 An ensemble is more fitting than a band; Snarky Puppy, the Grammy Award winning entity made up of numerous musicians, each with a strong chemistry with the instruments they are paired with, put together to amaze the Singaporean crowd on a Thursday evening. Clad in the average streetwear, shying from the whole “suit and tie” dressing code of a typical jazz-fusion band, these brilliant men proved there’s more that meets the eye than dressing up all fancy to show the accentuate the music’s worth. 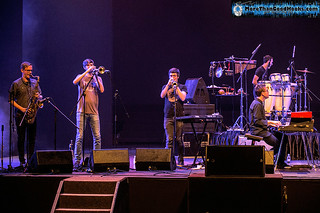 Seated nicely right in the middle of the heart of the theatre, I was not feeling the strong vibe as I saw the crowd streaming in. It didn’t feel like the usual gig atmosphere because there were no familiar faces around. I was initially a little too skeptical of the age range of the crowd but was surprised by the number of young adults I saw in the theatre that night. I am almost a quarter to a century old, but I am known as the person who lives twice my age and enjoys the songs on Gold 90.5’s weekend playlist. Nonetheless, I was surprised by the turnout for the night. I could see the theatre filled with people of different ages and I was suddenly all pumped up for what’s in store. 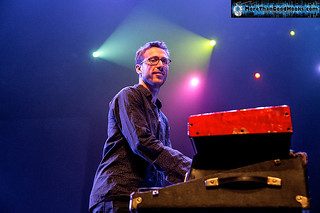 They played their popular numbers including “What About Me?” which got the crowd roaring while humming the tune in tandem with the beats. It was truly out of this world, the delivery of the sounds and the whole funk and soul fusion that comes behind every song. The versatility of the drummer was especially astounding, and the pandeiro was approached with a technique of playing that blew our minds. Fellow concert goers of whom I know to be members of the various local bands had their head bobbing and nodding, showing various signs of satisfaction and immense joy on their faces. 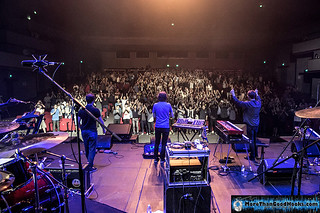 The band’s encore, “Sleeper”, was celebrated with an all around standing ovation as Shaun Martin on the keyboards started freestyling and burst into Eurythmic’s “Sweet Dreams”. That got the crowd wilder than ever, showing off the impeccable vocal range he has even with the aid of the synthesizers. We clapped and tapped our feet to the ongoing rhythm of the numbers and we were just overwhelmed by the insanity of the fusion funk and jazz delivered that evening. It was a great night of many takeaways from their amazing live performance.

Definitely not an underdog performance, but a one that touched many hearts and brought back the true essence of music right before our eyes.