Not a day that goes by without my Spotify playlist playing the song “Roxanne” and each time it comes on, I would mouth the to each and every single lyric, be it in a crowded bus or a train or even when I’m shopping for groceries (yes, I am always plugged into the music every where I go). I remember vividly having watched the song being performed live and it was one of the most unforgettable nights and experiences I have had during the course of patronising concerts and girls throughout the years. It was nearly five years ago since then and I am still in awe.

Upon learning the news of the legend’s return, I imagine re-living the same night in December 2012 when I was still getting myself immersed in the beauty of a live concert surround. It never changed. Gordon Sumner or better and more widely known as Sting once again graced our humble little red dot to promote his recently released album titled “57th & 9th”. I can’t say that I have heard the recent album but I knew that it would not be something foreign to me and I would enjoy the night regardless. Sting may not be my go-to artiste for most of the time but I’m constantly reminded of how great his songs are be it his solo musical pursuit and that of The Police. The song “Roxanne” in particular brought back a lot of fond memories from yesteryears.

I was seated pretty close to the stage, my very first time to be in such a seating arrangement as compared to the past shows that I have attended in the past at the same venue and I was very much in awe because I could clearly see each and every single details of the stage setup from a proper point of view as supposed to the elevated seatings at the other sections. I was scrutinising every detail of the stage and I realised one thing – it was not ostentatious at all. Not that it is a bad thing but it gives a very comfortable vibe akin to a small intimate setting despite the size of the venue. I could see and feel the wave of crowd streaming into the venue but somehow or rather, it felt close and composed. 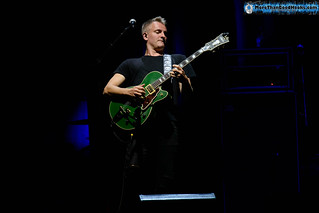 I was aware that there would be opening acts for the night but I was not entirely sure which bands are opening until the first act of the night introduced himself onstage. Clad in an all black outfit, silvered tresses and a smile, he introduced himself as Joe Sumner and it struck me, could this actually be Sting’s son and I quickly reached for my phone and Googled it as many would and true enough, I put the two and two and once he started belting out the sweet notes into the microphone, I murmured to myself “he is his father’s son”. The sole spotlight shone on him and everywhere else was in pitch darkness. His voice echoed through the crowd as he sang the song titled “Jellybean” after he gave us a brief introduction to how the song came about. A song he wrote for his children and there’s nothing more pure than having your own little humans inspire you to write beautiful melodies and the song is a living proof of how wonderful life is when you have your music to share with your family. Though he only sang a few songs, it moved me in ways I never thought I could feel. I found myself lost into the midst of his performance, feeling the sincerity in each and every word he sang. It felt right, just right. 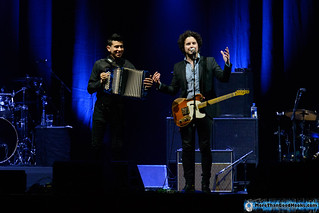 I have not heard of a new rock and roll band that I could get in tuned to until I saw the next opening act that came on stage. The Last Bandoleros is a good mix of country and the edginess of the rock and roll vibe that rang strong across the stage. The particular song titled “Maria” got my feet tapping and I mouthed to the lyrics of the song. It got me hooked instantaneously that it felt as though I already knew the lyrics by heart. Their chemistry on stage was amazing and it has been quite some time since I saw such dynamism on stage where each and every member compliments each other and the instruments married so well into the songs they performed, I didn’t want it to end but I knew I was in for more treat that night awaiting for the legend himself to grace the stage. 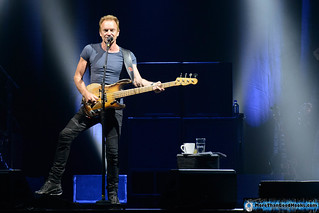 Sting opened the night with “Synchronicity II”, a track off the highly acclaimed The Police album released in 1983 titled “Synchronicity”. The sudden rush of memories came gushing in and I surprised myself that I actually remember the lyrics to the song. It came naturally as the riffs rolled in, one after another. I’ve always enjoyed the Reggae/Ska vibes that The Police’s songs possess, sectioning them out of the various bands in the 80s, a very different take but very much enjoyable. The next song came on and I just couldn’t help but to bop my head and swayed my body from side to side as the vibes exudes with the words sung by the name himself none other than “Spirits in the Material World”. One of the forgotten songs of yesteryears that my dad would casually play on the stereo when he’s vibing The Police for the day. He never boasts about loving The Police or Sting but I could find “Message in a Bottle” lingering somewhere in his music playlist. 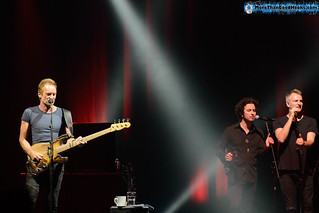 The night progresses as he sang his heart out. Never once in the performance I felt out of touch with my surroundings. I found myself immersing deeper and deeper as the night went on, and the intimacy of the performance grew fonder and fonder in my heart and it felt so right and relatable. As soon as the song “Shape of My Heart” was performed, I let out a surprising squeal that gained glances from the patrons around me and I had to apologise for the scare but the exchanges were smiles and chuckles. One of the ladies nudged me and said “I squealed too” and gave me a side hug. I knew then and there I wasn’t the only one that had the song impacted me in a huge way.

I remember playing this song over and over again as I read the lyrics through the lyrics book and sang my heart out, recalling the time I was crying to the song after experiencing my very first heartbreak, too young at that, but I chuckled and I teared a little as I sang along to the song. I kept my eyes affixed to Sting on the stage and I could feel a connection that was heartening and sullen at the same time. There was an unspoken strike that came in between me and him and I’m sure many other patrons were sharing their emotional connection in the ways they could interpret it. It was a special moment for me. 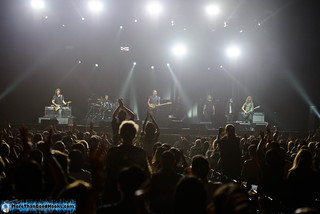 I sat down right away and zoned out for a good few seconds until the familiar riffs rolled through and I cannot miss this because I listen to this song every single day of my life and I was just mouthing the beats to the song and the patrons all around me were joining me in my pursuit to make out the song just by mouthing. We stood up and sang “Roxanne, you don’t have to put on the red light” as I closed my eyes and sang my heart out. I forgot that I was in a room filled with hundreds of strangers and I thought that I was taking the stage in my shower, as a bathroom singer. It felt exhilarating and I can’t remember the last time I sang my heart out at a show. It was definitely a first in a long time. The song couldn’t get any better especially with the mash-up and his own rendition of “Ain’t No Sunshine”, it blew my mind; I was just stunned as my jaw dropped. Another favourite of mine made popular by Bill Withers but Sting executed it perfectly like a second skin. 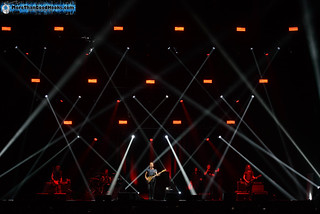 Of course, the night wouldn’t be complete without the song “Every Breath You Take”, a staple for Sting to be singing and more so a favourite number of all The Police/Sting fans out there and I can say that on behalf of the many fans, myself included. The song felt surreal as he sang the lyrics to the chorus, something that only him and he himself could decipher the beauty of the song and the gravitas the lyrics of the song holds, as we sang to the song that sends massive cheers to our hearts. How could a massive concert feel like as though there was only a small crowd in attendance? His ability to create an intimate feel amongst a large audience with each and every song he performs and the excellent chemistry ongoing on stage left many smiling throughout the two-hour plus show. Even though performing live is not an easy feat, you could tell that they were not only a band but they are one big family on stage and every person complements each other well.

I salute Sting for maintaining such a reputable position and yet exude humility given the years of musical experience and the number of fans he has garnered worldwide. Not merely a musician but also a kind soul that dictates music like a journey. Thank you Live Nation Lushington for the amazing night that will linger for a long, long time.