Punk rock has always been acquainted with revolution, a nicer and impartial way of going against the norms, or being a conformist to the societal acceptance and demands. Punk rock has always been an outlet for the many teens angered by what they can’t comprehend. It was a voice and a platform for them to speak their minds and punk rock bands have long established such a reputation, a healthy disagreement to the system, I reckon.

I grew up being exposed to many different genres. Some of which I can’t really gel well with but some of which, the songs keep ringing in my ears, up till today. No matter where I go, I could always put a song title to what is happening around me; I could always relate my experiences with a song or a complete playlist.

I can’t say I’m a huge fan of punk rock but a particular band has always been at the back of my head, upon mentioning and discussing the particular genre of music with my friends. Of course, the first band that would be in my radar is most definitely Green Day and I’ve spent a most of my teen years watching them play “American Idiot” on MTV and I never got bored of it, not even the slightest bit. But there is one punk rock outfit that caught my attention, and I can confidently say that I find myself singing to their songs during random times, be it at work, in the washroom or even while waiting for a movie to start. A song that’s innate in my head is still “We’re All To Blame”. The album titled ‘Chuck’ was released in 2004 and I remember saving up the bit of pocket money I had for school and skipping meals just to be able to buy the CD for myself. It was revolutionary to me when the lyrics to the songs spoke more that just the mere superficiality of repetitive chorus that meant only on the surface. The band named Sum 41, the very first band that got me thinking more beyond the music aspect. And I have never been the same since then.

Upon learning their return to our sunny, recently very hot, island, I got the sudden pangs of flashback dated years ago when they came here. I vividly remembered that I was clad in my ACDC shirt and how they played “Trooper”, a popular number of Iron Maiden as part of their soundcheck. Safe to say, the night ended in my heart’s rapid pumping and not forgetting falling, and dirtying my jeans, especially at the knee area when I was caught in the chaos of the circle pit when the crowd went while at the mention of “SACRIFICE!” by Deryck when they were performing my favourite song. I had to take 5 before I was able to get into the crowd. I was yet all too new with the etiquette of moshing and also participating in circle pits. I was sure that it would all be better but I wouldn’t expect the crowd anticipation to be any other way.

Today’s show was at a new venue, and frankly, pretty interesting as none of us would ever thought of a plausible gig venue at a building which built it’s reputation on household needs and groceries sold in bulk but not having the luxury of space in our Lion City, I guess we make do of what we can get. It was an interesting setting, with a space that could easily fill up to about more or less a thousand concert patrons or even more. I wouldn’t be able to gauge exactly and I was skeptical of the crown turnout at first. As per usual, I spoke too soon and the hall started filling up. A wave of fans clad in black shirts, with ‘Sum 41’ printed across the chest. A sea of strangers, but we came united as one to sings out hearts out to the band we adore.

My friends and I were standing at the back, I until we decided to move in front to get a better view of the band and I caught myself smiling ever so widely upon seeing Deryck’s face and his smile. He was someone I admired for the longest time, way before Julian Casablancas or Phil Bozeman came into the picture. He was what I wanted in a guy, in a future husband. Not because of his outlook, but the persona he carries, so strong yet real and pure. He wasn’t chasing the high life, unlike the many of his calibre who makes full use of the fame and glory. He stood rooted to his grounds and his humility precedes him. He is as human as he is an influence to many. 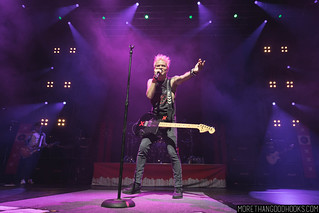 The band graced the night as they started the show with “The Hell Song”, a track of their album titled ‘Does This Look Infected?’ and what more can we ask for with the return of their old lead guitarist, Dave. The band felt complete. Dave was not here the last time but he is this time, and it just felt in place. 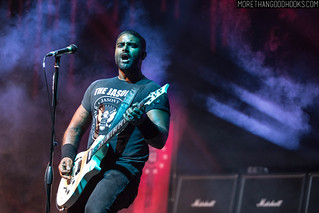 The crowd started pushing and shoving and my friends and myself were caught off guard because the first song always gets to you. It feels like the very first time, time and time again, when you watch a band that you’ve spent days on end just listening to their music on your iPod or Spotify and to see them live; it’s a whole new feeling together. We were getting ready to get loose just in time when the familiar riffs to “Over My Head” came on. And that’s when we sang our hearts out as we moved in tandem with the crowd, body hits and the random pushing and the occasional ‘YEAH MAN’ while holding up their fingers to the devil’s horn, saying ‘ROCK ON!’; I knew I wouldn’t want to be anywhere else. 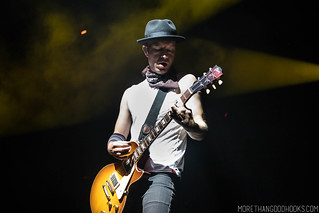 I must admit I haven’t paid much attention to their recently released ’13 Voices’ but I can’t say that I don’t have a song that I don’t spend a lot of time listening. A earworm for me last year has got to be the song “Fake My Own Death”. The crowd began to get rowdier and the pushing and shoving got more intense and we were just going with the flow as we sang our heart’s out to the chorus, not caring about sounding in tune, we screamed “You’ve got to take me away. Cause I wanna feel, something that’s real” as we reflect upon ourselves, something we seek everyday. A sentence as simple as that could hold such gravitas and what more with the accompaniment of great melody that further enhances the weight of the simplicity of it all. I was 16 again (cheating off 11 years of my age) but I felt the sudden surge of a healthy dose of teenage angst, just wanting to purge the feelings and being immersed in the crowd of similar intentions. It felt so real and so right. 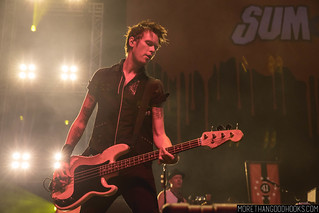 As soon as Dave started playing the tune that is so familiar, I got stares from people around me as I hummed to the tune and they joined along, with their silent nods of agreement. I haven’t even had conversations with half of the people around me during the show but it felt like I’ve known them for years. To agree without exchanging of words felt more in sync than having to explain it. The circle pit grew bigger as drummer Frank beckoned the crowd with the hard hits of the snare as they continuously circled and raising their hands, basically going as crazy as they could get. I was lost, lost in my own world as I sang to each and every word to the song. Having to watch them perform this live and watching it twice, it was always better the second time. I was hit with the sudden recollection of falling down when Dave screamed “SACRIFICE” but this time, I was moshing and moving like nothing else in the world mattered. I was channeling all the energy I had in me for the song and I never felt more alive than I was before. I smiled though my shirt was drenched in sweat but that was inevitable given the body contact with the crowd and the constant jumping and moshing. 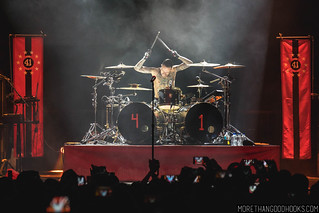 The night went on to a pinnacle high when Frank graced us with the amazing drum solo followed by old favourites, and we sang along to “War”, which was dedicated to a fallen musical hero, Chester Bennington. The song gave off a sombre disposition and each word that left Deryck’s mouth weighed more than the world as heavy hearts of fans who lost their favourite musical figure through the battles of everyday life. It could be us but it was also an important lesson learned that we are after all, still human.

The mood picked up when “In Too Deep” came on. I can’t remember how many times I’ve heard this song being played as background music for old high school movies or TV series but it is a song that definitely no one could ever miss a beat too or even forget, even if you want to. It’s just in you, if you grow in the era of the 90s through the early 2000s. 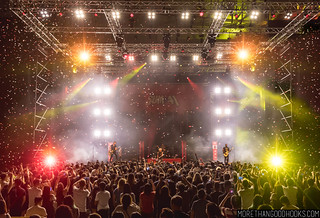 The night ended off with “Fat Lip” and the crowd grew crazier and rowdier more than ever. I’m not one to complain because I went with the flow and a part of me was going to regret it but I convinced myself that it was all well too worth it.

I could feel my back aching though I felt 16 that night but the reality of my age was reminded of the backaches that I had as the aftermath of moshing but there was not a single bit of a hint of regret that filled me and I was all round thankful for the amazing yet memorable night.

Thank you IME for letting us relive the young days dated through a decade and for making our wildest punk rock dreams come true. And thank you Sum 41, for your music, for the sanity you kept us in check with, with your music at its purest and most true. We clench our fists as we pump them in the air, cheering and singing along to songs we love and songs we cherish, and for the ones that mould us to be who we are today; to never forget who we truly are and to stay grounded.