It was a beautiful sunny Saturday on August 15th, as locals and tourists of all ages bustled along the largest shopping mall in Singapore, VivoCity. It may be oblivious to some but right opposite the busy mall sat Neverland II in St. James Power Station – where America’s pop rock band The Maine was scheduled to play later that evening. Following their show in Manila, the band had arrived in the country two days prior, proven by an Instagram post from the frontman, John O’Callaghan. They not only went to a few radio stations, they also had a meet and greet session and played an intimate acoustic set at Rdio Asia the day before!

The sold out show was The Maine’s second time here, all thanks to Upsurge Productions! I embarked on my journey to Singapore in the wee hours of the morning and as estimated, I arrived at the venue around 1pm. A long line had already existed and like everyone else, I was hoping to get a spot in the pre-show meet and greet session. Hours passed and the line grew exponentially to the point that it got a little messy. Security and event personnel reshuffled the queue which had sparked controversy as there were attendees, whom had started queueing up as early as 3am, dethroned by other late comers for the spot upfront. This was quickly resolved as the kind and helpful event organisers explained that they would do their best for everyone to meet the band. By 5pm, a banquet table with five chairs were set up in front of the entrance and out came the quintet, hailing from Tempe, Arizona; John O’Callaghan, Kennedy Brock, Pat Kirch, Jared Monaco, and Garrett Nickelsen. 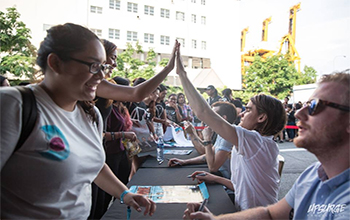 One by one, each fan had the opportunity to exchange hugs from every band member prior entering the venue. I have never experienced a concert event where you are given such opportunity as you attend the show. It was an extraordinary start of what some people would describe it, the best night of their lives. 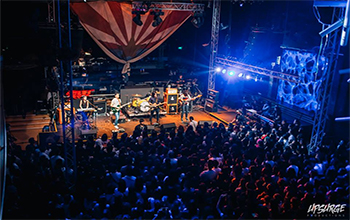 Deon, comprising of a local singer/songwriter Deon Toh and his band, was the opening act of the evening. They played a total of six original pieces comprising of “Summer” and “Spring”, to name a few. Their music can be described as a lovely blend of soul-yearning tunes that teenagers (or anyone, for that matter) can get lost into as they slip away from reality. It was not a surprise that they became a crowd sensation. With the objective of “warming the crowd up” for The Maine, Deon did just that as they mesmerized us all with their music, promoting the band’s Facebook page (Deon the Band) and thanking the crowd for their enthusiasm. 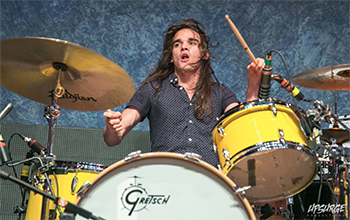 It wasn’t long until Neverland II went dark and was automatically filled with screams and shrills of an eager crowd. At 8pm sharp, The Maine took the stage with the song “Miles Away”. As they roll onto “Run”, John exclaimed to the crowd for all 800 people who were there that night to “move, move, move!” In the midst of the next song, “Growing Up”, John O’Callaghan took the opportunity to introduce themselves to their fans and ask for one thing, that is for us to put away our phones and cameras for just three and a half minutes and let loose. Sneakily, someone tried to capture that moment on camera, which caught John’s attention, causing him to playfully call her out. Next came the fan favorite “Inside Of You” and the crowd went almost mental, screaming and jumping to every word without taking a break from it all. It’s hard not to notice the awe in each and every one of the band members’ faces as they take in what they are presented with, halfway across the world. 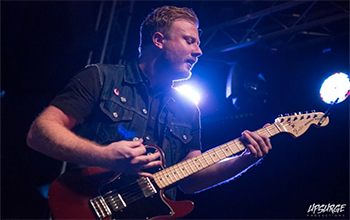 “Grow out your hair!” echoes through the venue, as the band performed “My Hair”, taken off their fifth studio album, American Candy, released on March 31st this year. Moving from side to side, as requested by John, the sweet riffs to “My Heroine” filled our soul followed by the groovy dance-y number “Same Suit, Different Tie”. It was amazing to be a part of a crowd that moves and sing along in unison. It became more memorable when John proclaim us all as friends before proceeding with “Like We Did (Windows Down)”! Personally, it was even emotional to witness this song live the second time around. Then John asked “what is the difference between Singaporean girls and English girls?” as they continued on with the first single from American Candy, “English Girls”. Honestly, when the crowd screamed out “American boys do to!” with the band, it was the loudest I heard the crowd went that night. The grin stretched on John O’Callaghan’s face was the brightest. 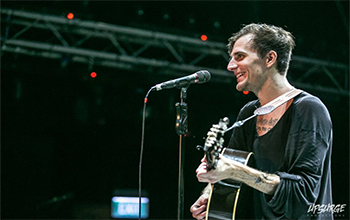 The night took a different turn as John whipped out the acoustic guitar and performed “Jenny” as a tribute to two very important people to the band, who were present amongst us that night, and his mother. It went from emotional to powerfully heart-wrenching as John addressed the fans how crucial it is to understand how that moment and second when it happened, it was our moment. It’s each and every person’s moment to experience. Not only that, he also expressed how important it is to build yourself and the people around you to achieve their dreams and goals because as he said it, “it’s attainable” as he urged everyone to never stop working towards the life you want for yourself. He then continued his speech by pouring his gratitude for coming out and supporting The Maine throughout their life as a band. It was moving, inspirational, soulful, and tear-jerking as John O’Callaghan alone sang “Into Your Arms”, with 800 voices chorus along with him from beginning to end. It was, without a doubt, the highlight of the night. 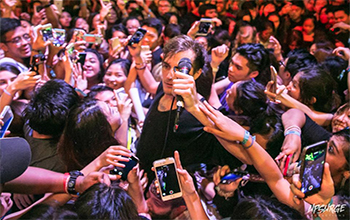 Another special moment was when John made the crowd ‘part the seas’ as he himself came down from the stage and into the crowd to perform a cover of The Rolling Stone’s “Satisfaction”. Neverland II was filled with girls’ and boys’ ear-shooting screams as they tried to get themselves of an arm’s reach of the sexy frontman. From there, they continued with “Love & Drugs”, a single from their fourth full-length album, Forever Halloween.

The final show of The Maine’s American Candy Tour ended with the songs “American Candy” and “Right Girl”. You cannot ignore the large smiles of the band as they bid farewell and the high buzz surrounding the crowd as everyone made their way out of the venue.

It was definitely a night to remember.