The xx Performed a Fuss-Free Gig in Jakarta

Almost a decade and millions of copies after their first album, The xx finally made their way to Jakarta, delivering a heartfelt performance. The city showed the Brit trio just as much love.

The year kickstarted on a high note for Jakarta’s indie kids, because The xx was scheduled to start their Asia tour in the capital city for their new album ‘I See You’ (2017). The British trio (Romy, Jeremy and Oliver)’s performance was a long-time coming, almost a decade after their namesake debut album and four years after Jamie xx’s solo concert in 2014. 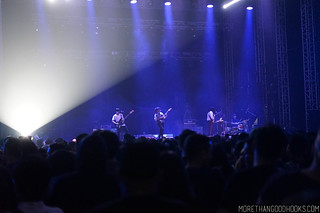 When the XX finally came on stage, the crowd filling up Hall B of JIExpo Kemayoran was all warmed up after dynamic sets from two homegrown opening acts – KimoKal and Elephant Kind. Familiar tunes of ‘Intro’ opened the performance. The sound system was on point (as expected from any Ismaya Live’s shows) and the lighting was super. Within seconds, loud cheers and smartphone-holding arms were up in the air. Then came “Crystalised” and “Say Something Loving”, the first song they’d performed from the new album that night. By then, it was clear that crowd singalong was to be the norm throughout the concert. 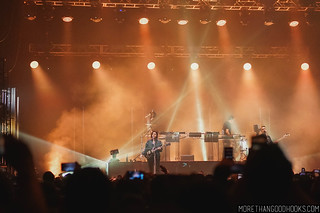 “Jakarta, sorry it took us this long to come here,” Sim greeted the crowd. That was one of the only few sentences that the band would have said throughout the night. But Jakarta was to experience such an intimate night, one that felt more like a ‘kumbaya’ session around the campfire than a hip concert from a band who’s sold a million copies of albums that was bound to create Instagram #FOMO around town. 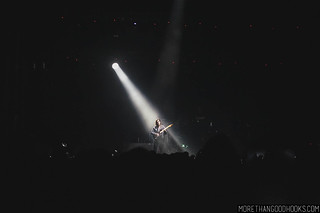 One of the most intimate moments was when Romy took the stage with a ballad version of “I Dare You”, performed acoustically and under a spotlight. The moment was precious not only for its musicality, but for its magic that managed to shut Jakarta up for a whole three minutes. Now that’s some real girl power.

The set continued with more new tunes – “Performance” and “Dangerous”. If the crowd was more familiar with the older tunes, or even if they were uninformed about The xx’s latest effort, the overall set was still a crowd pleaser with dynamic lighting. The lighting was worth mentioning as it did not only accommodate the sombre tone of the set, but also made for picture-perfect snaps for everyone in the crowd. This surely helped for concertgoers who did not manage to score tickets to the first two categories of the show, also for quite a few journalists who did not get VIP access. 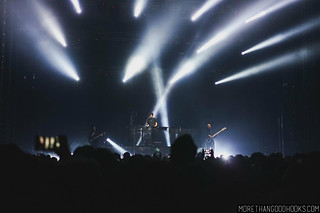 Arguably the most anthemic xx song – “VCR” – was the 11th song on the list. Dance-along circles filled the floor, and smartly Jamie elongated the momentum with his enjoyable spins. That moment, it felt like The xx just understood us, the concertgoers. That moment was probably one of the answers to why their “sleepy tunes” were, and are, such a big hit.

Jamie continued to take on the stage with “Shelter” and “Loud Places”, before ushering in their latest hit “On Hold”. The song, which talks about casual relationships in a very-xx way (subtle, reflective, and sometimes passive), is understandably relatable to millennials, who live a hyper-connected life that sometimes lack boundaries, time to digest and perhaps, meaning. 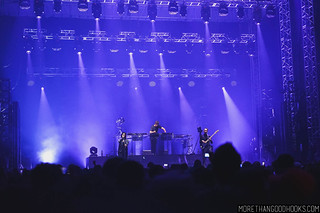 The set concluded with an xx classic, “Angels”, leaving the crowd in a meditative stage that lasted quite a while. Even after the concertgoers made their way out of the hall and bumped into plenty of friends, the vibe was calm and quiet – an anomaly in a city where noise was the norm.