Having to cancel a show for the first time in their career, twenty one pilots left Taiwan for Singapore with their spirits down, yet undeterred. With Tyler on strict vocal rest and antibiotics (the poor bean even resorted to acupuncture!), the duo from Columbus, Ohio landed in Singapore at around 2pm on 15 July, greeted by a handful of eager-eyed fans who were lucky enough to score autographs and pictures with the boys. Exiting the arrival gate with a surgical mask on, the disappointment of the previous day was evident and there was one question on the minds of the Singapore fans: “Is the show still on?”

With a timely tweet the day of the show itself, that question was answered, to the relief of diehard members of the skeleton clique who were queueing at the Suntec Convention Centre since 8am.

High off their first number 1 spot on the Billboard 200 chart for their fourth studio album, Blurryface (stylized as BLURRYFΛCE ), which was released on 18 May through Fueled by Ramen, the boys were catapulted into the hearts of hundreds of thousands of people and decided to embark on a world tour. “Yo, this song will never be on the radio,” they were told. Only the entire album would be a hit. The follow-up to their breakthrough masterpiece Vessel sold 147,000 units in the United States in the first week alone.

Here’s a little background on their chart-topping release:

The album is based upon a character named Blurryface, which represents both Tyler’s own insecurities as well as everyone else’s. If you were wondering, the black paint on Tyler’s neck seen in recent music videos as well as during their live shows represents the sensation of suffocating he feels when taking a stage and performing in front of people while the black paint on his hands represents his insecurity about the things of which he is the sole creator of.

When the queue started to wind around in a haphazard fashion (since there weren’t proper line control barricades outside the venue), a friendly crew member came out to rearrange everyone. He even asked us to hydrate and take turns queueing so we could all get lunch. “We don’t want to have to carry people out later, alright?” With a smile and a wave, he disappeared back through the doors into the venue. 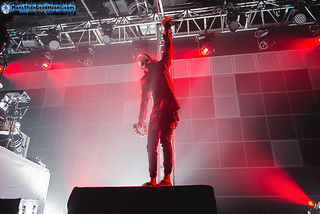 Fast forward exactly 12 hours to when the lights dimmed – the show was about to begin. This was the only show I’ve been to which started promptly without any delays whatsoever. The boys, dressed in black (like a funeral), emerged in masks to ear-shattering screams from the crowd. Not speaking at all at the airport (only smiling, pointing and nodding), I was wondering if Tyler’s voice was on the mend – and the first song that they performed, “Heavydirtysoul”, dispelled all my worries. You couldn’t tell that he was struggling with his vocals at all! With the microphone hanging mid-air swaying every time Tyler left the platform, the condition of his vocal chords was no longer up in the air. He hit every note and nailed every lyric to perfection. 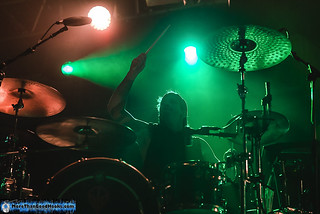 Let me take some time to turn the spotlight onto Josh Dun for a while. With his drum kit on risers and donning his regular red eye makeup, Josh worked the stage in his own way, relentless energy oozing from every pore. The stage antics were another highlight of the show, where he back flipped off of Tyler’s piano at one point and even managed to play the trumpet during “We Don’t Believe What’s On TV” – never missing a beat on the drums thereafter. Josh also interacted with the crowd by making funny faces and waving from time to time, earning excited squeals from male and female audience members alike. 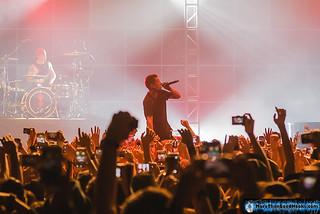 In the middle of the set, a commotion erupted in the crowd as a girl apparently sprained her ankle and was unable to get out and get help. Tyler noticed this and swooped in to the rescue like a superhero complete with the cape and everything. “Everybody take a step back,” he beckoned three times. A security guard even had to enter the pit to assess the situation and get the girl out. One of the main safety hazards of the venue was to do with the cable covers on the floor, which were too high and prevented the band from getting the green light to crowd surf – the audience just wouldn’t be able to support them. 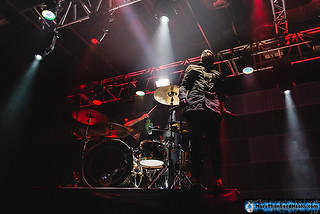 It was obvious the two of them were genuinely having the time of their lives on the stage as they exchanged grins from ear to ear when almost everyone sung back every single lyric. With a ukulele in hand and a pair of old-fashioned sunglasses, Tyler strutted the stage with such charisma that even a cheeky smile complete with a single stalk of sunflower between his grin would send a fan swooning. The man of many talents even wielded a bass during a cover of the Bob Marley & The Wailers hit, “No Woman, No Cry”, and got everyone grooving to the reggae-esque beat.

The band managed to pay tributes to almost every important person with their songs – “House of Gold” for Tyler’s mom, “Tear in My Heart” for his wife and almost every other song for Dennis – the man who invited them to play in Singapore – thank you, Dennis. 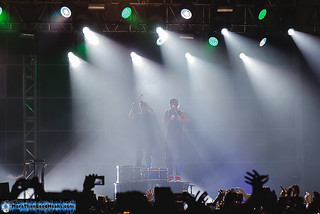 As the duo churned out song after song, everyone knew the night was coming to a close and there were two songs left – the unmistakable “Car Radio” and my personal favorite, the encore tune “Trees”. When the iconic ski masks came out, everyone was ready to sing along to every word of the breakout hit. You could feel the whole crowd jumping as one during the bridge and it was an indelible moment. The boys went backstage under the guise of “this is our last song” only to head back out for an encore. I was looking forward to the drum duel they usually do during “Trees” and it most definitely did not disappoint. Tyler stood atop the piano first and when he noticed that Josh wasn’t standing where he wanted him to stand, he so cutely poked him in the side with a mallet, to which Josh succumbed. 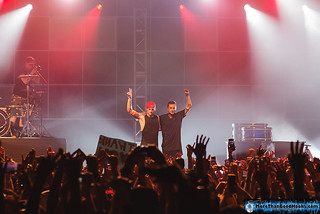 That night, everyone discarded their insecurities about themselves, confronted Blurryface head on and lived in the moment for about an hour and a half, losing themselves along with the two members of twenty one pilots who managed to unite a room full of people from all walks of life, dealing with their own demons. It was cathartic to say the least. Unlike how it would be meaningless to try to fit twenty one pilots into a fixed genre (this is not rap, this is not hip-hop, just another attempt to make the voices stop), they managed to do just that by successfully integrating each and every one of us into one experience, that of a twenty one pilots show.

So if you’re still wondering who twenty one pilots is, Tyler has an answer for you (one which he never fails to declare at every show):

“We are twenty one pilots and so are you.”