Through the years, we’ve been exposed to a diversity of music genres including electronica and new age metal, moving towards a more refreshing and New Age music. But we all enjoy the good bit of old hard rock and roll, the likes of Black Sabbath and the edginess of Judas Priest. I, for one, enjoy the occasional hard rock amidst the progressive metal that’s been on my playlist for the longest time.

I never patron Hard Rock Cafe as often as I’d like to but am well aware that the bands that graced the cafe on a nightly basis are nothing short of amazing. In conjunction with the upcoming Guns N’ Roses show over the weekend, the band has invited two bands as supporting acts for their first ever show in Singapore. One of which whom I was seeing for the second time hailing from the land down under and known for their snazzy guitar rifts, Wolfmother, got me thrilled at the edge of my seat. And the other band, I can’t say I’ve heard of them before but I was definitely intrigued by the name and I assumed their genre even before searching for them on Spotify. Tyler Bryant & The Shakedown is a name with a force to be reckoned with, suggesting their prowess. I’ve had the chance to catch them at Hard Rock Cafe two nights before the big day, and I was pleased to know that I’ll be awarded with the intimate setting of the performance space.

Being part of the LAMC Rising Star performers, I was looking forward to hearing and watching them play live because from the songs I’ve been listening to on Spotify, I have high hopes on how the band is going to sound live. 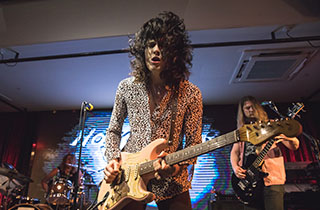 Tyler greeted the crowd as he graced the stage with his fellow band members. Clad in silky shirts, bare chested and a gold chain hanging down from his neck with a heavily teased hair, man, I’m ready for one hell of a show as I see him slinging his guitar around his neck and shoulders.

The hard hitting snares and the sludgy bass lines rang across the hall as you could literally feel the ground shaking in tandem with the basslines, it got my fullest attention and I couldn’t stop tapping my feet to the beat. 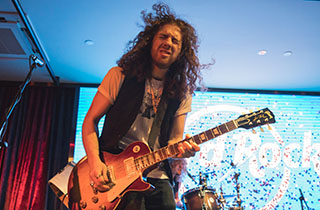 This particular song that remains ringing in my head titled “Last One Leaving” as the band led the crowd to join them to sing the pivotal part of the song as the roaring “woah oh oh woah woah” followed by aggressive strums to the riffs and the hard hits on the floor toms. It got the crowd punching the air and swaying, grooving to the rhythm. I found myself mouthing the words to the song even though I haven’t had the time to memorise them. 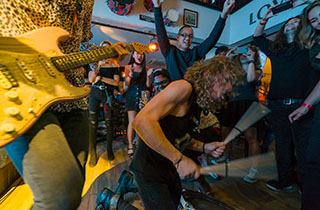 Another one of my favourites from them has got to be “House on Fire” as Tyler beckons the crowd to shout “come on, come on”. This definitely got everyone on their feet and dancing right in front of the band as they worked their magic on stage. 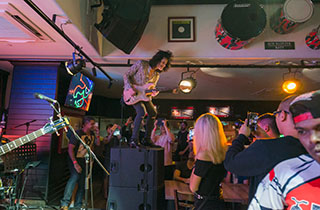 The night wouldn’t be complete if Tyler didn’t show us his stage antics as he climbed on the amplifier while playing his guitar and belting out notes at the same time, he was and through and through in the zone in all of the songs he performed. “Mojo Workin'” though caught my attention and my eyes were affixed at Tyler the entire time. I was told that Tyler was turning 26 that night. He’s only a year younger than I am and he is way more talented than I can ever be ever after pushing the age of 35. These young lads proved that age does not equate to how good they have to be as musicians. Talent speaks volume within the souls of these boys who graced us with the truest essence of rock and roll since the early 90s, what more in being able to compare them to one of my favourite bands, Sir Lord Baltimore.

It was definitely one of the best nights and I did not regret staying out late on a work night to catch the band at Hard Rock Cafe. I cannot imagine how amazing they’d sound opening for Guns N’ Roses. It was a no wonder Axl Rose personally invited the band to open for them at their US date in Cincinnati, essentially also landing them the same slot in Singapore. This was a night that took me back to the reason why I love rock and roll in the first place – the sweet twangs of the guitar riffs, the sludginess of the basslines, the hard hitting drum beats and the tenacity of the vocals ability to hit the high notes. It was love.

Thank you LAMC for giving us the opportunity to re-discover the true essence of rock and roll.