Yelle’s debut performance in Singapore landed as a double bill, on 12 and 13 May. This Francophone electropop trio dishes out dancey tunes in their native language and one would think that would limit their listeners to only French speakers, but no, this band is one of the rare French acts that has performed at Coachella three times. 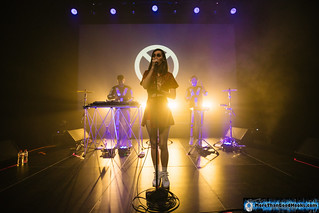 That is also why it’s not surprising to see a good mix of foreigners and locals at the Singapore shows. Held at the Gallery Theatre at National Museum of Singapore, the intimate space made the whole experience more endearing. Like a mini private party, a crowd of over a hundred people let their hair down while letting Julie Budet, whose namesake is Yelle, orchestrate their moves. 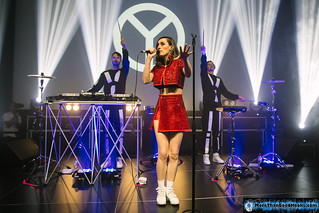 I only knew one song – Que veux-tu – but I went down feeling that I would be treated to a good performance and I was right. The trio took their moments on stage seriously – they pre-planned their moves to the song lyrics and moved in synchronicity to deliver a cinematic performance. Budet, danced in her glittery red outfit topped with her red lipstick that put the snazz in her jazz. Her counterparts Tepr and GrandMarnier sidelined her with cymbals and snare drums to liven up the show with their robotic note-hitting moves. 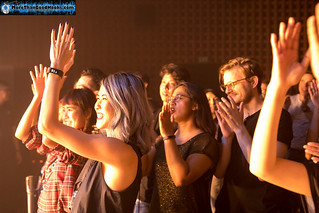 “Do you know ‘À cause des garcons’?” Budet queried the crowd. Notably one of the crowd favourites, the audience cheered in acknowledgement. It didn’t matter that I did not know 90% of the songs they played, nor did I understand a word of French. I shook my booty all the same. The trio delivered the show like it was a DJ set, mixing their songs cleverly, and letting the beats lead the way. 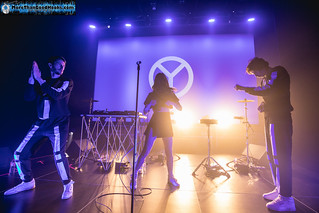 Despite the three-year hiatus from their last album Complètement fou released in 2014, they managed to pack a supportive bunch at the Gallery Theatre. Budet speaks in perfect English and her natural ability to charm the crowd made the one-hour performance feel like it could have been longer. The only let down was that Yelle didn’t obliged to an encore after series of Alle! Alle! from the audience on the first night. This French trio was definitely able to captivate the audience at their shows effectively, if not more so than an English-speaking band.