Almost every 90s kid that I have had the chance to cross paths with would recognize the well celebrated song each time you hear the familiar opening tune with the talk box, you know you’re in for a ride of a song. “Livin’ On A Prayer” has become an anthem to many. I speak on behalf of those whom I’ve had the chance to grow up with musically. It’s the well visited song each time we decide to go for karaoke or even while playing Guitar Hero, the song is everywhere, almost omnipresent.

It has been 20 years since they were last here, gracing our shores with their popular numbers and garnering the attention of their raging fans. I was a wee kid then and wouldn’t know a thing about the band but one thing’s for sure, nothing has changed in terms of their live performance.

Knowing that the night would be a massive hit, I made my way to the Padang Stage as early as 7pm. I managed to catch Boys In The Band earlier. Hailing all the way from Australia, they serenaded the crowd with the good oldies from Frankie Valli and The Four Seasons to the Beatles and also The Beach Boys. It was a good hit of a flow of nostalgic flashbacks as they bring us on a journey in their performance, a different take, really refreshing. And I spotted many middle-aged people tapping their feet to the beat with huge smiles plastered across their faces. A very beautiful serene sight. I almost forgot that I’m in the vicinity of the Formula One racing tracks.

I later found myself a good spot near the extended part of the stage with my floor mat as my true companion was a cardboard fan that literally spelt ‘I’m A Fan’ served it’s purpose as the crowd grew bigger and the heat intensified. I was glad I was able to be in the fan zone because it was the last day of the race and am pretty sure that many are just looking forward to singing their hearts out to their favourite songs of the well celebrated glam rock band that has been the talk of the town since this year’s Formula One weekend started. Upon hearing the announcement of being advised to move forward so as they could fill in the fanzone, I grabbed onto my bag and left my floor mat behind as the crowd literally scuttled to the nearest barricade they could be close to and plonked themselves onto position.

Three hours of waiting came to an end when the stage was lighted up and we were greeted with the 80s glam heroes. Cheers and screams rang across the Padang as each and everyone thumb their fists up in the air, beckoning for Bon Jovi to grace the victory of Vettel for the race. The night started with “That’s What The Water Made Me”, a track off their 2013 album titled What About Now. It sure got the crowd moving and personal space in the crowd was almost non-existent as we emulated packed sardines in the can, particularly in the fanzone area. 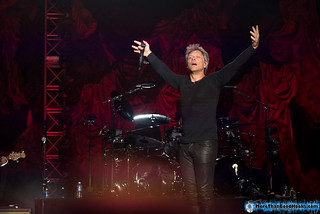 “SHOT THROUGH THE HEART AND YOU’RE TO BLAME, DARLING. YOU GIVE LOVE A BAD NAME” echoed across the vast crowd as each and every single one of us screamed at the top of or lungs, singing to the song that sent cheers to our hearts. Each and every word was sung by every person around me. The atmosphere was nothing less of an intense almost-sauna heat – almost suffocating, but we were more interested to sing the songs than to regulate our breathing. Many were seen jumping as Jon reached out closer to the audience, sashaying his way to the extended stage, almost deliberately trying his luck to take our breaths away, in which he succeeded in doing such. I took out my phone, which is almost a rarity during concerts but I knew it was a once in a lifetime chance to be that close to Bon Jovi and be singing out loud to “You Give Love A Bad Name”. Each time he sings “Oooooh you’re a loaded gun”, it feels strangely satisfying because then, I was only able to admire his vocal tenacity through the vinyl that I play or as and when I visit Spotify and type in Bon Jovi. The chorus, almost like an incantation with accompaniment of guitar playing, felt satisfying and rejuvenating through and through. Who ever thought being 25, you’re such an oldie at heart. I am guilty or more so proud to be one.

He serenaded us with the new tracks of the recently released album titled Burning Bridges that dropped only last month. It was something new and possibly a breath of fresh air but truth be told, Bon Jovi stick to their roots, possibly because of the unique iconic voice Jon possesses. I didn’t delve much into the new album but I heard the title track itself and I particularly enjoy that song off the new album. Can’t say the same for the other songs but I was sure, the night was progressing to where it should be. 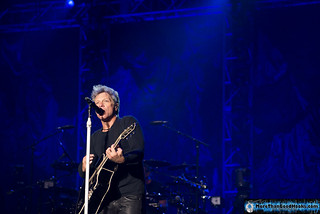 Jon strapped his acoustic Takamine around his neck as he strummed to the riffs of “Wanted Dead Or Alive”. A song that I haven’t heard for such a long time or more so, needs some proper revisiting. It was a good reboot of my memory of the song as I caught up to singing to the lyrics of the song and caught myself smiling silly. It’s almost an accomplished feeling when you get all that jazz right back into you. 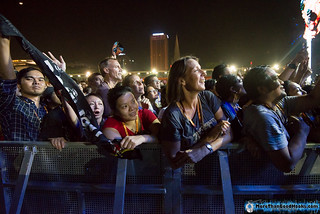 Jon continued and said “This is the first time we played this song” and the familiar riff greeted the stage and screaming were heard, reverberating through the crowd “THIS AIN’T A SONG FOR THE BROKEN HEARTED”. You literally see people in the crowd turning heads to one other and singing the lyrics into each others’ faces. It was like winning a lottery and the ground literally shook as each and every one of the fans jumped in tandem with the hard hits and the riffs. It was amazing and I almost forgot that I was still in Singapore. 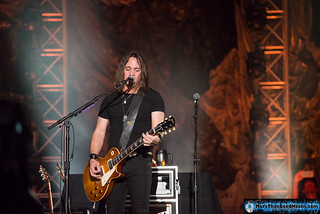 I was anticipating “Always”. It’s what the emo kid in me enjoy compared to stereotypical emo bands when I was 16 years old. It felt incomplete to not have Bon Jovi singing the song but possibly it might take a lot from the band since the strain with Richie Sambora. It felt different to have another guitarist doing the familiar talkbox sound but it didn’t change anything about the band as they crooned to their last number for the night. The highly anticipated song for the night and for many who grew up literally listening to Bon Jovi; we were all graced with “Livin’ On A Prayer”. The intensity grew exponentially as everyone pointed their fingers in the air and some were seeing air fist bumping. The song started with an acoustic touch, even so, people in the crowd could recognize the familiar riffs and sang their hearts out the the opening lines. I was on my two left feet, trying to move in tandem with the crowd. Not to mention, I had the pleasure of briefly touching Jon’s hand when he came down from the stage. That felt almost like me being able to hold the Mona Lisa painting in my hands. The overwhelming teenage girl in me jumped and chuckled in total excitement.

I came out of the crowd drenched from my own sweat with my ears still ringing from all the screaming and cheering but it was a night not to be forgotten. Even at the age of 53, Jon Bon Jovi along with his league of extraordinary gentlemen still has got their groove intact and they’re rocking socks off given the matured age. Thank you for making our night and our Sunday amazing and possibly eradicated Monday Blues for your fans that sang their hearts out to the songs and rang out to the cheers they love and enjoy the most.