It has been just two years since singer-songwriter Halsey made her debut performance in Singapore at the 2016 F1 Grand Prix. This time though, she brought Niki with her, Jakarta’s very own emerging R&B superstar. The singer held her own as she strutted the stage like a seasoned pro (which was astounding to witness knowing she is just 19-years-old).

“You all make me feel like a million bucks,” she proclaimed, before closing out her set with “Vintage”, the lead single off her first EP, Zephyr. It’s safe to say that the future will only get brighter for the young talent, who will surely breeze through her career, what with the confidence she already possesses.

Currently blazing a trail on the Hopeless Fountain Kingdom Tour, Halsey appeared on stage lookin’ as fine as a damn Monet, in a comic-book inspired ensemble, appearing to have carte blanche of the situation as soon as “The Prologue” ended and the first beats of “Eyes Closed” kicked in. 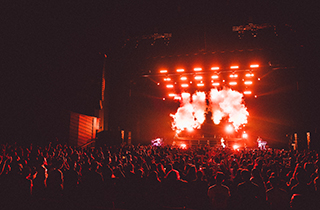 Accompanied by drummer Nate Lotz and keyboardist WhiteNoise, who remained very much hidden in the shadows but nevertheless bolstered the overall production and sound, the darling starlet captivated all eyes like a centerpiece, and spoiled the audience with an undeniably farouche delivery of both old and new tunes. Performing hits spanning her short yet established four-year-long career like “Colours”, “Hurricane”, “Bad At Love”, and “Roman Holiday”, it was a night of empowerment, complete with a real-life display of Tumblr aesthetics.

Rated NC16, the show drew all the more excitement from her diehard supporters as they speculated with bright eyes what the queen had up her sleeve. Although it went without the inclusion of the songstress’ arguably most recognisable tune, “New Americana” (again), the stage production surprisingly included pyrotechnics, which only matched the intensity level Halsey was operating on, practically running on gasoline as she grooved jauntily on her own, and made it a point to interact with the crowd. 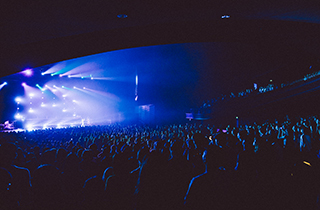 The 23-year-old art pop singer-songwriter is the first female to achieve the feat of landing the top spot on the Billboard 200 chart with her second full-length studio effort, Hopeless Fountain Kingdom. Having achieved so much, you would think that she never needs an introduction, but she made one anyway. “My name is Halsey and I’ve waited to come here for a very long time,” she said, as she officially welcomed each frantic fan to the Hopeless Fountain Kingdom.

At one point she sprinted off stage and through the crowd, making it difficult to follow her movements because of her petite stature. She later explained how she enjoys being close to her fans, and truly appreciates the fact that we could’ve been anywhere in the world but chose to spend the night with her. The classy venue, comparatively smaller than what she’s used to, also allowed for a more intimate ambience. 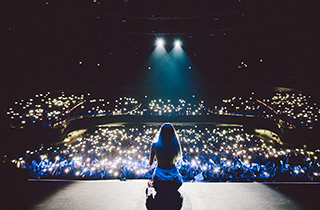 She also took some time to elaborate on her connection with music and her journey with everyone who has supported her over the years. “I know that so many of you have grown up with this music, and I’ve grown up with you at the same time, and it just feels like we know each other. Let’s see if you know this one,” she cheekily said, as she launched into a stripped down version of The Chainsmokers’ smash “Closer”.

Her dreams have very obviously evolved into an extravagant empire, as we all bore witness to on Wednesday night.

And when you start to feel the rush,
A crimson headache, aching blush,
And you surrender to the touch, you’ll know:

Halsey can most definitely put on a show.